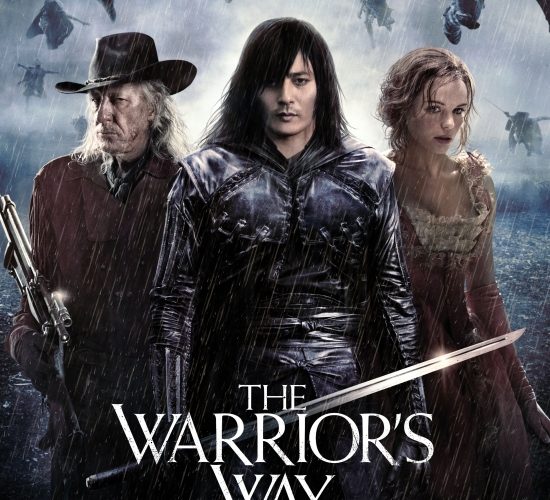 Like many people, I watched the trailer for The Warrior’s Way with general disinterest; nothing about it looked that intriguing or entertaining, and the line “ninjas…DAMN!” made it seem like it was going to be some sort of tongue-in-cheek cheesy action flick. How wrong I was. Not only is it entertaining, but it’s just so damn different that I couldn’t help but fall in love with it. Okay, maybe love is too strong a word, but it was good. Really good. I know, I’m shocked too!

Dong-gun Jang stars as Yang, an assassin with a ninja clan known as the Sad Flutes (not in a slide whistle kind of way, more of a “the sound the vocal box makes after the throat is slit” way) who is hell-bent on destroying a rival clan. Thanks to Yang, their best asset, they’ve nearly completed their goal and he dispatches the few remaining rival clan members…at least he thinks he does, until he discovers an infant girl. For some reason, the infant strikes a chord with him and instead of killing her, he takes her into his care and leaves the country to avoid retribution by his fellow Sad Flutes, especially their leader, Saddest Flute, played by Lung Ti.

Yang escapes to America, more specifically into a small Texan town with a population made up mostly of circus folk (midgets, clowns, bearded ladies, people of that nature). He catches the eye of Lynne (Kate Bosworth), and the two run a laundry shop together. He teaches her how to throw knives and she teaches him how to have feelings and what not. While it seems like this is a good situation to cozy up in – hot girl, small town, no problems – it turns out that a gang of outlaws headed up by the ridiculously villainous Colonel (Danny Huston) are riding into town to rape and pillage the cute women (i.e. the ones with teeth). Lynne wants revenge on Colonel for killing her family, and Yang has to fight the urge to help her out lest he be found by his former clan. How would that happen? Unsheathing his sword obviously, pfft how could you NOT know that? Eventually, Yang’s conflict with the Sad Flutes and Lynne and the town’s feud with Colonel and his gang all come to a head. Bullets fly. People die. CGI blood and green screened ninjas. You know the drill.

The Warrior’s Way will split audiences and critics alike; people expecting a fun action romp will go home disappointed and possibly confused, but people who eat Asian cinema like it’s a box of Pocky sticks will fall in love with this. I can’t quite explain how, but this doesn’t feel like an American movie; everything, from the way the action scenes are set up to the way the plot progresses, has an Asian cinema flair to it. And that’s good or bad, depending on which side of the fandom fence you fall on.

There’s a lot to dig here though, if you’re inclined to give it a chance; it’s beautiful to look at save for some subpar green screening, the actors are all the over the top in a fun way (Geoffrey Rush is especially fun as town drunk/gunslinger Ron, and the likability of his character will cause you to forgive every time Rush slips in and out of the Southern accent). There’s not a lot of character development here, but there is enough weird characters mixed in that you don’t really care. Yang is a man of few words, but unlike Dwayne Johnson’s Driver in Faster, it doesn’t create a boring experience. By speaking so little, he makes his few chosen words arrive with more weight.

The MVP of The Warrior’s Way is, without a doubt, Danny Huston. Lately whenever the actor’s involved in a film, it’s been pretty much a guarantee he’s going to blow it (Edge of Darkness, Clash of the Titans, X-Men Origins: Wolverine). With this one though, he redeems himself by somehow reigning in his over the top-ness while, at the same time, letting it fly. I know it doesn’t make much sense, but he pulls it off; his character of Colonel is way more over-the-top than his other roles, but for some reason he feels more subdued. It’s one of those “see it to believe it” situations. Either way, Huston is worth watching the movie for alone. Any villain so evil to lick wounds he has inflicted on people in a sexual way is worth your money.

The Warrior’s Way will probably make very little at the box office; in fact, people were walking out as the movie was nearing the end mumbling about wanting a refund. Their loss. This is a fine movie and compared to the movies we usually get on a mainstream level, it’s vastly different and definitely more out there. Its look and feel make up for some of the lesser elements (a flat ending, some really bad CGI blood and green-screening). If you love Asian cinema, then definitely check this out (in fact, the first movie I thought of after I finished this was Sukiyaki Western Django). If not…well, I say it’s worth a glance. It may not be your cup of tea, but it’s worth exploring the more off-beat every once in awhile.

Oh, and before you ask, the line “ninjas…DAMN!” does not show up in the actual movie. Sorry.

Will you see The Warrior’s Way in theaters? What did you think?