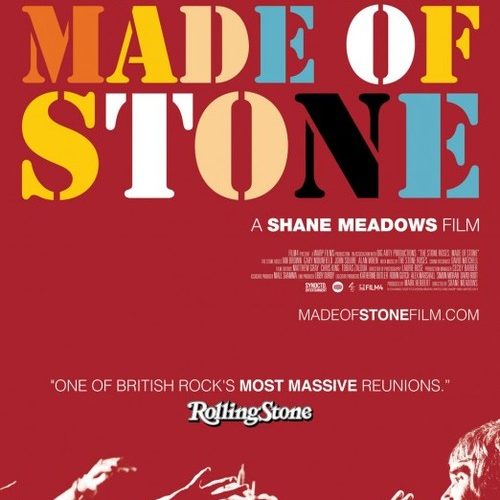 [Review] The Stone Roses: Made of Stone

Until inimitable singer Ian Brown, guitar god John Squire, affable bassist Mani, and long-MIA drummer Reni congregated in a London hotel in October 2011 before a throng of world press, Manchester’s Stone Roses seemed as unlikely a reunion candidate as the Smiths, the Jam, Talking Heads, and the Beatles. (Yes, I’m aware of the inherent difficulties in the latter reformation.) But as This is England and Dead Man’s Shoes director Shane Meadows shows us in the documentary Made of Stone, this fan-fantasy really did occur. The resurrection was captured by Meadows and his cameras, and for those fans who were unable to make it to the band’s overseas shows, or its headlining Coachella gig, the documentary is the next best thing.

That makes it a vital, important visual document, and a mostly satisfying film — emphasis on “mostly.” Made of Stone is the fans’-only film in excelsis, and that is part of the charm, for the larger-than-life, ever likable Meadows is as big a Roses junkie as there is. As a filmmaker, though, Meadows is in a tricky spot. He has attempted to create a film that both thrills Stone Roses obsessives, yet also provides some context for the novice. As fascinating and enjoyable as the end result is, Made of Stone spends too much time trying to justify its existence, and not enough time actually presenting us the band as it exists today. However, any real Roses fan will likely emerge pleased, so deep has the desperation been since the mid-90s. Meadows has unearthed a stunning treasure trove of footage, much of it dating back to the band’s early, vaguely goth-y youth. As the film progresses, the band’s strange, fractured history is revealed. In short: The Stone Roses emerged from the late 80s “Madchester” scene with an intoxicating sound that was equal parts Byrds and Acid House, punk and Hendrix. Confident, surly, and wildly talented, the band recorded a self-titled debut album still considered by many to be the best LP of all time, held its own mini-Woodstock at Spike Island, and disappeared — for nearly half-a-decade! — into an abyss of drugs and Zeppelin obsession. The overhyped, destined-to-disappoint Second Coming followed, and soon after, an already splintered group drifted even farther apart. Reni left first, then Squire, and after a surly, disastrous headlining slot at the 1996 Reading Festival, Brown and Mani called it a day.

This was an expectedly messy breakup — the Roses never did anything half-assed — and in the years that followed, Brown lobbed verbal bombs at Squire, the guitarist seemingly moved from musician to full-time artist, Mani smartly joined with Primal Scream, and Reni laid low. In the intervening years, the band’s original cheering section aged, and new fans discovered the majesty of The Stone Roses every day. By the time word leaked that the group was, indeed, planning a resurrection, a sizable portion of followers had the same response: “Seriously?!” Meadows knows this feeling better than anyone, and smartly opens the film backstage, as the aforementioned Soho Hotel press conference was about to begin. It’s fascinating to watch the four hang out, then take the stage, spouting lines like, “Hatred is wasted energy,” and “Our plan is to take over the world.”

Meadows jumps ahead a few months, and gleefully explains that only 10 weeks remain until the Roses’ triumphant homecoming shows at Heaton Park in Manchester. Clearly, the filmmaker’s assignment — “to make,” he says, “a documentary about your all-time favorite band getting back together after 20 years” — is a joyous one, and Meadows certainly captures this sense of “WTF?!” Sometimes he captures too much of it. After some rehearsal footage (the first song the band plays is not “I Wanna Be Adored” or “She Bangs the Drums” but the swirling shuffle that is “Something’s Burning”) a surprise show is announced for Warrington, a town west of Manchester. Ever the band-of-the-people, the Roses asked fans to bring CDs or shirts to gain admittance. The film spends way, way too much time talking to these fans; while the long sequence hammers home the band’s importance in the eyes of its fans, the faithful go on, and on, and on. One line from Mani, “I’m like a kid on Christmas morning,” is far more moving. The Warrington concert footage is a Made of Stone highlight, and soon, the Roses’ tour is in full swing, with Meadows on the sidelines in Barcelona, Lyon, and Amsterdam. It is in the latter city that things take a turn for the worse: Following audio problems, Reni walks out. It’s a highly dramatic sequence, and movie-wise, it’s a godsend. “Things are … Tricky,” Meadows says, as newspapers spit out headlines like “Stone Roses split up again!” Happily, the split did not last, and we are finally on to Heaton Park, and a band ready to prove why it all still mattered. By the time Brown, Squire, Mani, and Reni perform a mesmerizing “Fool’s Gold,” it feels as if we are witnessing more than just a reunion, but another chapter in the history of an essential group. This is goosebump-inducing stuff, indeed.

If, that is, you already love the Roses. If not, Meadows never quite gets to the heart of what made the Stone Roses seem like such a breath of fresh air amidst the pomp of U2, et al. The performances are stellar, the old footage is compelling (especially some wonderfully awkward interview clips), but what is both a larger context and, more essentially, the voices of the band today. Squire and Reni almost never speak, while Brown and Mani talk in circles, enjoyably. Over the end credits, the boys sit and laugh together on a flight, and we cannot hear what they’re saying. As my friend, a Roses die-hard, put it, “I want to hear that! Not another fan.” Perhaps Meadows was kept from including some of these off-the-cuff discussions, or perhaps he was simply so mesmerized by the performance and archival material that he made the call to minimize the interviews. That’s understandable, and even without an abundance of such footage, “Made of Stone” entertains, and occasionally captivates. “I missed all the really cool gigs,” Meadows says with a sigh early on. Thanks to his film, those of us who share his predicament can say they were there — almost — for the third coming.

The Stone Roses: Made of Stone is now in limited release.