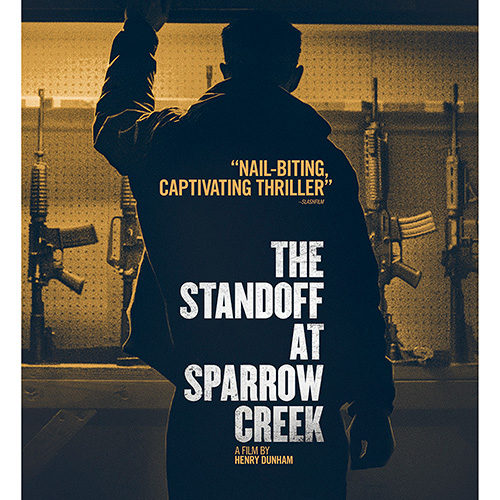 Review: ‘The Standoff at Sparrow Creek’ Shows the Monstrousness of Complicity

The film begins in total silence to the point where you wonder if something went wrong with the sound. The camera pans through still trees until finding Gannon (James Badge Dale) on the ground with rifle ready to take out the deer we can assume is somewhere out of frame. It’s only when we hear the pop of guns in the distance that we realize first-time writer/director Henry Dunham has been meticulously ensuring that we process exactly what he needs us to before heading towards the solitary locale we’ll spend the rest of The Standoff at Sparrow Creek‘s short yet tense 88-minute runtime. Having Gannon visible when those blasts go off is deliberate because there must be no question that he’s the one man we can implicitly trust.

Why? Because he’s soon to meet-up with the other members of his documented civilian militia inside their warehouse armory — men we can do nothing but mistrust by comparison. Gannon heard about the carnage that happened in the distance on his police scanner so he knew the group’s leader Ford (Chris Mulkey) would be contacting him for a rendezvous. Next arrives Beckmann (Patrick Fischler) with a few new details like where it happened (a funeral). Then its Hubbel (Gene Jones), Keating (Robert Aramayo), Morris (Happy Anderson), and Noah (Brian Geraghty) with word that the deceased was a cop and therefore all the lone shooter’s targets were too. Their worst nightmare is hearing that the suspect was a militiaman like them with an automatic weapon, flak jacket, and flash grenades.

Unfortunately, however, the day can still get worse. It’s one thing to know they’ll be targeted and thus be forced to lay low and remove batteries from phones, but it’s another to discover a missing rifle right under their noses for which no one except the seven of them had access. All we’re certain about upon this revelation is that Gannon is innocent. And being a former cop for whom Ford trusts, he’s designated as internal interrogator. From here arise details about who these men are and why they’ve chosen to align themselves with a group whose manifesto is to conduct the very type of attack that occurred. It’s therefore interesting that none would admit responsibility. They’re glad it happened, but afraid to take the fall.

The avalanche doesn’t end there either as groups around the nation see this attack as a catalyst to mount their own coup against local law enforcement. Should Ford and company join that cause since this outcome was always lingering in the backs of their minds? Or should they let desperation take hold in the utilitarian form of letting one of their own take the fall regardless of a confession to guarantee the rest of them survive the night? Paranoia can’t help but set in as three men are singled out and tied up thanks to accusations while another controls the CB radios to try and stay ahead of the police. They compile facts that allow some to pretend for martyrdom’s sake while also proving that guilt a lie.

And just like them, we don’t see what’s happening. Dunham isn’t interested in showing the bloodshed because he knows it could never beat the intrigue of getting inside these men’s heads. Why aren’t they rallying around this attack like those other groups? Why are they so vehement in their desire to keep themselves safe when the whole function of this “social group” is to prove they’re willing to go that extra mile to protect their country above all else? They should be applauding the member who took it upon himself to ignite civil war, not tie the noose that hangs him. The simple fact they’re willing to murder one of their own to put an end to the fighting reveals they’ve always been more bark than actual bite. So this is where we see their true mettle. Gannon’s questions are how we find out what an ex-Aryan Brotherhood soldier is doing in their club and why their mute might be more dangerous than they ever could have imagined. The claustrophobic intensity rises until secret relationships that lead to unsubstantiated votes of confidence are revealed only to ultimately place those singled out into deeper water. These are dangerous loners who banded together with the false promise of community only to fall back onto their paths of self-preservation, dismantling any façade of integrity they fabricated in their bid to escape civilization without actually destroying it. We listen to them spew their rhetoric only to admit they’re too weak to pull the trigger when provided the chance.

That pause or cracked voice is what resonates here because it shows the type of vulnerable outcast who seeks camaraderie through violent means. These are men searching for purpose through vengeance that spin it as justice in order to believe themselves righteous on that quest. When isolated they are prone to break. When together they’re willing to go down with the ship if for no other reason than avoiding the embarrassment of standing idly by while the rest meet their maker. This is why Gannon separates them. He needs to push them to the brink of admission without someone else clouding their desire for importance. He does this because he’s not after the truth. Gannon wants a scapegoat too — not to save his own skin. He’s protecting another. And while we sit in anticipation to learn who takes the blame, Dunham distracts us from an underlying message moving beyond action towards intent. He’s not vilifying these militiamen as much as stripping them bare to show the pain and suffering they’ve warped into a macho mystique to retreat further and further from salvation. He’s not lauding the police either once stories of Gannon’s past crop up to reveal how damaged our world has become in its desire for results driven by any means necessary. In the end there are no good guys onscreen. These are two halves of a whole that failed each other and thus themselves in the process. It’s men doing heinous things to heinous people without the wherewithal to acknowledge the mirror between them.

So don’t expect a happy ending. Don’t expect anything because Dunham is playing with your expectations in a way that renders his conclusion worse than any bullet to the head could prove. The Standoff at Sparrow Creek isn’t about finding hope in a hopeless situation through a broken man willing to be the hero rather than villain. No, it wants to show the monstrousness of complicity and the helplessness of a conflict too far-gone to solve. Every actor perfectly portrays a willingness to conduct as many “wrongs” as possible to achieve a “right” that keeps his character proud if not alive. Only Dale finds the sadness necessary to accept the merit of selfless sacrifice. And seeing his face when presented with his reward is nothing short of devastating.