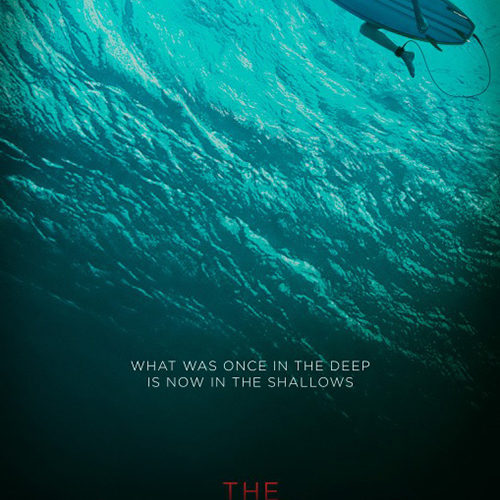 The sun is shining on a pristine, secluded beach — a kind of cove consisting of white sand, a coral reef, and an outlying island that looks like a woman in repose. As the tide goes out, a small rock appears from out of the crystal-clear waters, ringed in fire coral and crawling in small crabs. A woman, bleeding and terrified, finds purchase upon this rock and tends to the wound on her leg. In the water surrounding her small slice of sanctuary, a 15-foot great white shark circles, crazed with the scent of her blood, waiting for the rising tide to sweep her back into its domain. The beach is empty, the sun is setting, and no one knows where she is.

Nancy (Blake Lively) is a medical student taking a break from school following the death of her mother. Rattled by the long and ugly battle her mother fought against cancer, Nancy has taken to traveling, finding herself now in Mexico at the beach her mom first went to when she found out she was pregnant with Nancy. Hoping to find some trace of her mother among the waves, Nancy paddles out on her surfboard, far beyond the shore and out into the water to catch wave after beautiful wave. Unfortunately for her, a whale carcass mored on a rocky reef has drawn a great white into the cove. Territorial and frenzied by the carcass, the shark attacks.

The specifics of the situation and how it progresses are open to all kinds of questions from unengaged minds. Would a shark really commit itself to protecting a single area in such a way? Would that same shark never find its bloodlust slaked by a full stomach? Would any of the various twists and complications happen on any given day, let alone all of them over the course of two days? These questions are not unwarranted, but they are also questions that the film’s writers and directors rarely remark upon, so confident are they that the tale they are spinning will fend off such inquiries.

Boy, are they ever right. In each of his previous works, Collet-Serra has proven himself to be an old-school action movie craftsman, depending on character to lay a solid base for his novel action set pieces and never straying too far from the focus. He makes lean, sharp films of a kind rarely seen in Hollywood nowadays. They don’t suffer from the bloat and excess of their peers, and they play into the strengths of their leads to create identifiable characters quickly.

Here, Blake Lively’s blend of wide-eyed expressiveness and lithe physicality serve to make Nancy a character at once capable in spirit and vulnerable in body. As the focus of nearly every scene, it falls on Lively to carry both the immediate terror and deeper emotional undertow of each beat of the story, and she holds up her end of the bargain ably. From paddling into surf, speaking over the phone with her family, and tending to her vicious wounds, Lively hits every note true and sure.

Her craft is bolstered by Collet-Serra’s staging and pacing. The geography of her situation is never in question, and the shark moves and appears with a fidelity and honesty. It would be easy to make the animal a ghost or a monster, able to appear out of nowhere without warning, but the clockwork of a real situation draws more tension than the cheap thrills of a jump scare, and Collet-Serra knows this. He uses close-ups to sell the emotion of a moment and gorgeous aerial and wide shots to show the audience how the pieces on the board are set. Then he lets the game run, with both personal stakes and more visceral thrills driving the audience toward the finale.

The final trademark of a Collet-Serra film, and the point at which most audience members will decide whether to take or leave his particular brand of storytelling, is the endgame. After a story steeped in meaningful growth for the character or characters involved, told with panache but grounded in its own cinematic reality, Collet-Serra has a tendency to let loose in the final act, and The Shallows is no different. After a whole film built on intimate expression and subtle tension-building, the proceedings let loose in a burst of absurdist glee, taking us from taut thriller to jaw-dropping action excess. It’s a delicious, cathartic payoff to what had until then been a sober, wrenching tale. Best of all, it feels earned both in terms of character and in terms of pure experience: rather than coming off as just another beat of extraordinary spectacle to be bludgeoned with, it feels like a beautiful, unexpected reward.

That same feeling accompanies the whole of The Shallows. After a summer glutted with films pushing punishing, redundant set pieces on grand scales, we finally have a film that is patient, atmospheric, and delights in delivering escalating thrills of a smaller but more valuable variety.

The Shallows opens in wide release on Friday, June 24.