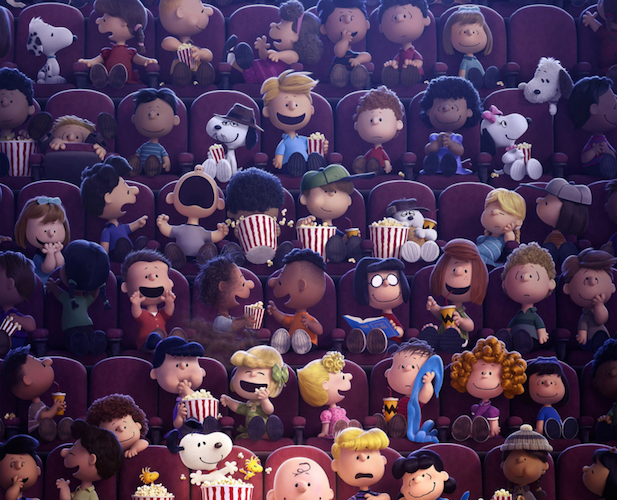 When any beloved property is adapted in a new medium for the big screen there is bound to be a slew of anxiety that comes along with it. The odds of someone taking something you know by heart and love on a soul-deep level and disrespecting it in the name of commerce are stacked astronomically against you. That goes double for a film based on a comic involving children as characters and an appealingly dark existential streak. With children as characters, the film will invariably be geared towards children, and so one would be forgiven for believing that the soul of the story would be altered to appeal to them as well.

So it is was a huge relief to find that The Peanuts Movie manages to maintain the soul of the comic strip even as it upgrades the visuals.

About those visuals; despite being computer-generated and utilizing the third dimension from time to time, the movie is still very faithful to the Peanuts comic and the classic films. Words still appear above the heads of characters as they write, clouds of dirt still follow Pig-Pen, squiggly lines appear to denote emotions, and Linus’s hair goes nuts when he is shocked. There is actually an appealing sort of tactility to the way the movie is done, with Snoopy in particular looking like a felt cut-out on a simple yet gorgeous background.

Of course the look of Steve Martino‘s film is only a part of the whole, and without the same dark-yet-still-beating heart it would all be for nothing. Lucky for fans, the film gets what made each character special and also what leant the comic strip its particular charm. Snoopy must be chaotic and imaginative and slightly narcissistic but with a streak of debonair self-esteem. Lucy should be mean, Linus should be wise, and Marcie should be slightly delusional but winningly assertive.

The story, however, focuses primarily on Charlie Brown, and so it is imperative that the film understands not just him as a character, but as a foil for involving and humorous narratives. He will almost always fail, but he will get up and try again and keep an optimistic yet incredibly introspective and existentially awareness of himself. Charlie Brown is funny because he fails so astoundingly, but he is worth rooting for because he keeps dusting himself off and thinking that the next time might be different. We want him to succeed, even if we may never see it.

The story told in this particular film is one that will be familiar to Peanuts fans. Charlie Brown, the eternal outcast and goat among his group of friends. becomes smitten with a new student in his class, The Little Red-Haired Girl. Desperate to impress her and cast off his shroud of constant failure, Charlie Brown tries to excel at dancing, academics, and magic. Of course being Charlie Brown he cannot help but fall short in all of these ways, usually in the most over-the-top and subversively humorous of ways, but still he soldiers on. All the while, his trusty beagle Snoopy engages in inventive asides based inside of the action/adventure/romance novel he is writing. These asides tie in with the main narrative in very tangential ways, but they mainly serve as wordless action scenes to break up the existential anguish and uncertainty of the Charlie Brown scenes.

The intercutting of the two storylines can be a bit jarring for someone really invested in Charlie Brown’s story. It’s a credit to the film that a charming story about Snoopy flying his doghouse against the Red Baron could feel like an obstacle to finding out what the emotional climax to Charlie Brown’s story is. Still, though both stories are strong their weaving together robs them of a bit of their impact, but might play better on a second viewing.

The true magic of Schulz’s Peanuts remains in its most potent form in the comic strip and the incredible Christmas special. That being said, given the risks involved in the creation of this film, The Peanuts Movie stands as a bit of a triumph. The odds were against it, but it came out ahead of the curve in spite of itself – Charlie Brown himself would be proud.

The Peanuts Movie is now in wide release.