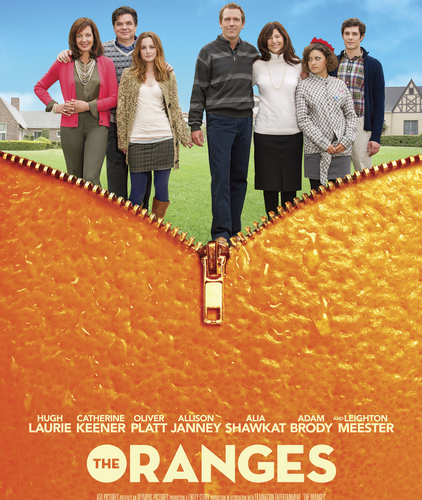 The Oranges, the feature directorial debut of Julian Farino (producer of HBO’s Entourage), operates within a setting so brutally common within the world of the American independent film: the suburbs. The two families we follow are the epitome of success and the problems they make for themselves are the product of being afforded enough time — thanks to this success – to think on those problems, and go on to make them worse.

So it is for David (Hugh Laurie), an unhappily married man who finds himself attracted to the meandering daughter, Nina (Leighton Meester), of his best friend Terry (Oliver Platt). David’s daughter Vanessa (Alia Shawkat) narrates the tale for us, a college grad with an interior design diploma who’s making every excuse not to leave her sheltered New Jersey cove. And so, while the husbands drink beer in the man cave, the wives gossip. Once David’s burgeoning affair with Nina comes to the surface, of course, everything changes. David’s wife Paige (Catherine Keener) moves out, while Terry’s wife Carol (Allison Janney) yells at and around her daughter. The men remain silent for the most part, looking confused and awestruck at where they are in their lives.

This conflict and set-up works well enough at the start, Farino successfully balancing comedy and drama in this very real world of middled-aged angst and settlement. Meester, known mostly from her long stint on the CW tweeny hit show Gossip Girl, gives a surprisingly understated performance as a confused, tired girl pretending to be more of an adult than she really is. We understand how someone like David could fall for Nina, and vice versa. Comparatively, Laurie does solid work here as David, though the ensemble nature of Farino’s script does not allow his character a great amount of pathos. Keener is unfortunately wasted as the spouse who runs away and goes a little crazy, foreshadowing the sitcom pratfalls to come. Sure enough, despite its fresh-enough dilemma within the well-worn world of sad, well-off white people, the second half The Oranges becomes an extended episode of rather poorly-plotted network television. This includes the re-introduction of an ex-boyfriend of Nina’s named Ethan (Sam Rosen), who shows up from the west coast, where he and Nina once lived, to reclaim her as his own after he cheated on her. This poisonous, aggravating plot turn and corresponding character almost single-handedly sinks the entire film.

Sadly, there are plenty other wrong-headed turns Farino takes that help drive this once-promising little relationship study into another variation on the crazy holiday comedy troupe that got old about five minutes after Christmas Vacation came out. Terry, for example, has a ridiculous Christmas ornament set-up in his front yard. Crazy Paige has a car. What do you think will happen?

It’s in these moments characters we once had the capacity to care for become something other than real people. They devolve into caricatures of people like this, becoming no kind of people at all. And even though the film, kept grounded, may have ended no differently, the resolution would have meant so much more had I believed in the beings on screen.

The Oranges arrives in limited release on Friday, October 5th.