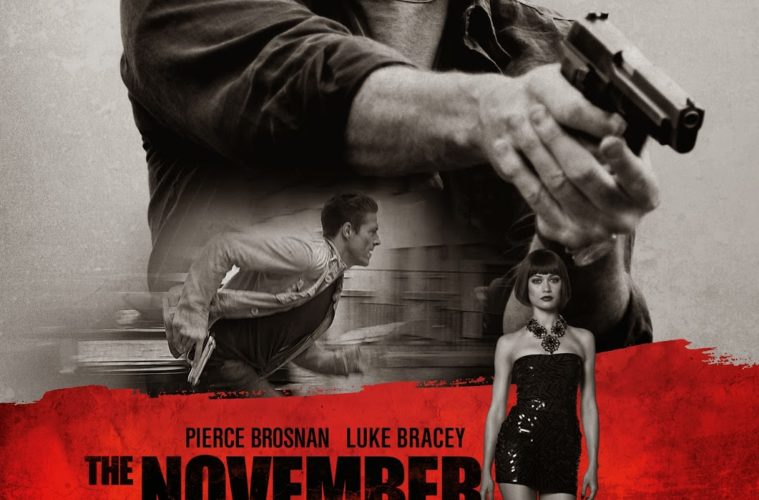 A few brain cells short and a handful of years too late, The November Man arrives in theaters, the longtime passion project of former James Bond player Pierce Brosnan, as directed by veteran filmmaker Roger Donaldson.

Brosnan plays Peter Devereaux, a beaten-up and turned-out spy who just can’t get out of the game. Early on, tragedy strikes at the hand of his most promising protege (Luke Bracey), and the rest falls to retribution and the idea of ‘making it right.’

Competently shot by Romain Lacourbas and scored by Marco Beltrami, The November Man feels like a relic of another time. This is the kind of spy adventure, concerning crossed lines and lapsed political ambitions, that would have starred a 90s Harrison Ford and been released with some fanfare in the peak of summer. Sadly, Donaldson’s film is neither smart nor exciting enough to live up to its pedigree, instead floundering in a sea of plodding sub-plots and strained relationships with characters we don’t care about. In yet another thriller, we have Olga Kurylenko mostly wasted, serving as the victim-with-a-secret that must be protected for lofty reasons we’re never quite clear on. Worse still is the other female character, a lady assassin named Alexa (Amila Terzimehic), who has next-to-no lines of dialogue to go with her brutal demeanor. It feels like the screenwriters Michael Finch and Karl Gajdusek are trying to apologize for Kurylenko’s underwritten female victim with an underwritten female killer. Instead, it’s doubly aggravating, another male-centric film that hammers home this idea that women can’t be very interesting or of much use in most situations.

Brosnan does good work here as the titular spy, though it too often feels like he’s playing in a better film than we are watching. The man has spent a significant portion of his career working in fictional espionage, and it’s constantly impressive all the different layers he’s been able to mine as a man of mystery, from playful as Bond, to dangerously sociopathic in The Tailor of Panama to very funny in The Matador. Here he’s clearly playing Devereaux as tragic anti-hero, capable of both love and murder. And in the moments the film allows, Brosnan shines. Consider a scene in which Devereaux gives his protege a choice, save the woman he cares about or get his man, then slices the woman’s artery. There’s a brutality to this scene that feels true and daring and sadly misplaced.

Towards the end of the film, a villain speaks to the nature of the spy game, telling Devereaux, ‘We don’t collect information. Information is useless. It changes everyday.’ People and relationships are the currency that matters. If only more of the characters here mattered a bit more to those watching.

The November Man is now in wide release.