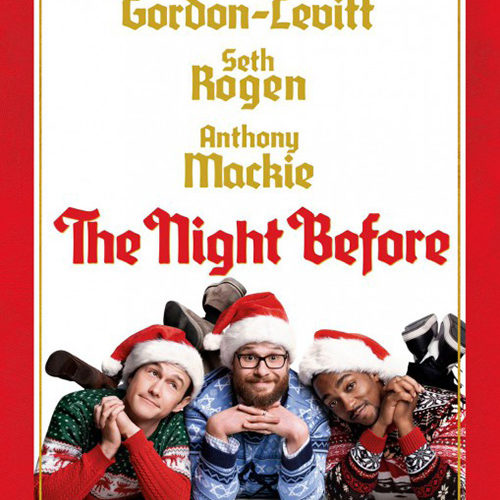 [Review] The Night Before

The past few years have seen nearly everyone within the Judd Apatow orbit look inward, writing stories of begrudging but graceful maturity, building that rely on the metatexutal aspects of their tight-knit clique. 2013’s This Is the End was a thrilling apotheosis with its deconstruction of the cult of celebrity through stars like James Franco, Seth Rogen, and Jonah Hill, playing characters who are real-life celebrities, but hyper-personified through their careers.

Last year’s The Interview was the next step, bringing Franco and Rogen into a context where they faced something larger than even their own star power. But even with the specter of one of the greatest boogeyman toward the western world, South Korea, and the ensuing controversy, it was still swallowed whole by predictability and Franco’s staid shtick. Chris (Anthony Mackie), Ethan (Joseph Gordon-Levitt), and Isaac (Seth Rogen) are three best friends who’ve spent every Christmas together since Ethan lost both of his parents to a car accident decades ago. This year marks their final outing as Chris is adjusting to fame after becoming a football star, Isaac is bracing for a child with his wife, Betsy (Jillian Bell), and Ethan is struggling to cope with losing this shared tradition, and a recent breakup with Diana (Lizzy Caplan, whose scrappy sincerity is totally wasted here for a shirked ex role).

The plot centers around the Nutcracka Ball, the big kahuna of holiday parties, which they  finally have tickets for after years of failing to get in. In the meantime, they’e all about having the most memorable night possible. Isaac is vacuuming up everything he can humanly ingest from a literal Pandora’s Box of drugs, while Ethan and Chris map out a night of old haunts like their regular karaoke spot, their high school, and their favorite restaurants, but those plans quickly derail.

From its opening, the film makes misguided characterization decisions. Ethan is supposed to be our emotional center, but the script demands him to be an anchor. Gordon-Levitt’s pre-natural lightness is consumed by a morbid angst, and that’s before the script piles on irritating commitment-phobic character tropes. Chris is equally polarizing as an egomaniac football star who is finally reaching the top rungs of fame. Investigating that exact moment could be insightful, but his entire personality is mostly just reduced to showboating. There are glimpses of vulnerability and charisma, but it’s buried under mountains of narcissism.

Seth Rogen’s Isaac is the real highlight here through sheer force of will. Rogen is such a known quantity at this point that his face will determine if this movie even piques your interest. Here, he’s cranking his usual manic drugginess to eleven, but it’s accompanied with an unrelenting, infectious joy that every scene he’s not in automatically droops. Rogen isn’t just a token slacker though. He’s a successful lawyer and a committed husband to Bell, who casually holds her own, and expertly avoids dreaded stereotypes of a nagging wife. A scene near the coda involving her is easily one of the most emotionally engaging of the entire movie.

The rest of the supporting cast is far more uneven. Michael Shannon is easily the MVP as a dirtbag soothsaying drug dealer who mispronounces oregano, but other expected scene stealers like Broad City’s Llana Glazer and Nathan Fielder are regrettably flat. Glazer, particularly, is relegated to a sluggish chase subplot, although she does finds room for some of her signature ratatat raunchiness.

The Night Before has a foundational identity crisis. There’s small pockets of convincing dialogue between the friends, but this clashes with random, chaotic set pieces that recall something like Harold & Kumar Go To White Castle. The difference is that Harold & Kumar had this spontaneity built into its very DNA while The Night Before is attempting to deal with more grounded concerns.

Worse, these set pieces rarely feel anything more than perfunctory. Like The Interview, the action often feels like it needs to escalate without ever understanding why. Even a climactic scene at the Nutcrackas Ball is kind of tame compared to the Gatsby-ian bacchanals that have become the norm in our party-obsessed cinematic landscape.

Levine has shown himself to be a solid director in varied dramedies like Warm Bodies and 50/50, but here he has a hard time reining in the cross breeding of drama and comedy. Sometimes the humor is coal black, while other times it’s as broad as a modern Adam Sandler movie.

In the last fifteen minutes, the movie finds a world where these actors don’t feel like they’re boxed-in types. Sitting at Christmas dinner in their various homes, they’re no longer heightened, and they look and feel like real people. It’s hard not to wish that the whole movie was about these people, rather than stars going through the motions of a holiday movie.

The Night Before opens in wide release on Friday, November 20th.