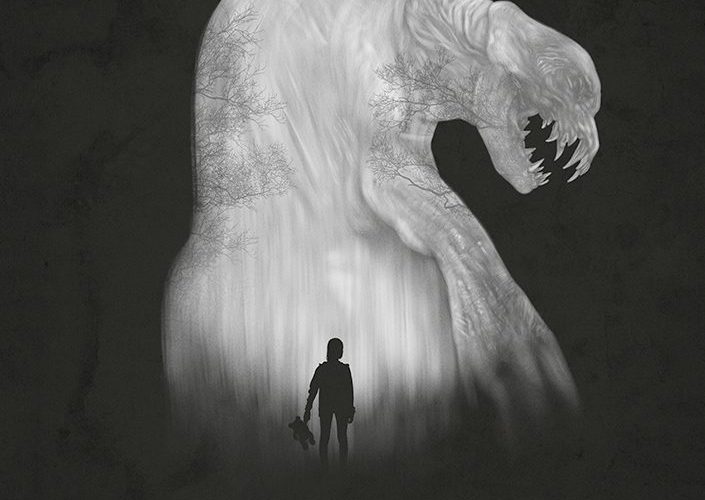 Monster movies are tough because there’s a desire to go full bore into cat and mouse chaos or metaphorical symbolism. Things get muddled when both are attempted at once without the correct balance. I’m not saying picking one or the other always spells success — writer/director Bryan Bertino‘s debut The Strangers ultimately failed at mysterious chaos despite some effective scares — but it does often allow a filmmaker the opportunity to focus and reinforce his/her idea with less chance of getting distracted. Bertino’s third film The Monster, however, suffers the same fate within the other camp. This one utilizes metaphor and flashback to depict a volatile mother/daughter relationship wherein the “monster” proves an embodiment of their worst selves. Unfortunately, this idea is never dug into further than its surface conceit.

I’m not kidding when I say volatile either. At times the hatred Kathy (Zoe Kazan) and Lizzy (Ella Ballentine) hold for one another is seething enough to burn with scowl or shriek. Lizzy resents her mother enough to bar her from coming to an anticipated school event because the woman hadn’t showed interest before the night of the performance. And Kathy grows so frustrated with her daughter’s refusal to blindly listen (despite knowing how she’s let her down as a rule in the past) that she lobs f-bomb after f-bomb before simply leaving the girl alone to fend for herself. You have a headstrong child who’s had to mature well beyond her years without outside assistance opposite an alcoholic, verbally abusive mother who cannot hide her potent indignation. It’s therefore only natural that a malicious creature would manifest to terrorize them in the darkness on what may prove the last time they’ll ever be together (Kathy is dropping Lizzy off at her father’s knowing full well that the animosity between them could shift the custody balance). You have the demons created by alcohol and anger versus the righteousness of an innocence quickly dissipating with each rage-fueled reaction to Mom’s immature outbursts. This monster will either destroy them both literally from limb to limb, or virtually by showing them to be selfish and petty and uncaring about the other’s wellbeing or it will galvanize them for perhaps the first time ever. Survival either becomes a solitary endeavor or a selfless act neither might have believed was possible.

I only wish Bertino delved deeper into it being a nightmare born from within. By rendering the horror as a straightforward monster wreaking havoc type trope, the obvious allusions to the past don’t exactly become meaningless, but are certainly saccharine in the easy thaw from anger to fear to love on display. Watching Kathy and Lizzy react to their escalating situation shows less gradual evolution forward than the simple exposure of something that always existed beneath prickly exteriors guarding themselves from inevitable pain. This colors the volatility of the past as petty and the compassion of the present shallow. Letting the monster interact with others gives it a life of its own and its impact on Kathy and Lizzy becomes as unimportant as those other victims.

Suddenly The Monster becomes a by-the-numbers horror wherein characters figure out ways to acquire the tools needed to kill it. It’s also about setting up periphery players to die so the gruesome factor increases without sacrificing a major role too soon. And being that Kathy and Lizzy are stranded due to a flat-tire after hitting a wolf in the middle of the road, the collateral damage arrives in the form of tow truck driver Jesse (Aaron Douglas) and EMTs Leslie (Christine Ebadi) and John (Marc Hickox). We move from tooth to sounds to blood-covered limbs to full-on face-to-face carnage with the half-Venom from Spider-Man, half-Terror Dog from Ghostbusters beasty (Chris Webb). Kathy and Lizzy try figuring out its weakness and hatch their plan for a chance to live. This is all well and good if you only want to scratch the surface of what classic genre work supplies. Want a little terrorizing, graphic mauling, and screaming as razor-sharp teeth bear down? Wish granted. But I don’t think even Bertino is satisfied with this. There’s no reason to give us so much footage of Kathy and Lizzy’s past if his sole goal was to kill people. You don’t need angry mothers and daughters to portray the intrinsic strength of their familial bond once death seems a forgone conclusion. These two don’t need to despise each other for their future actions to mean something. This is why I must believe Bertino wanted more of a connection between monster and psychology than he’s able to clearly communicate onscreen.

It’s at no detriment to the moody atmosphere shrouded in shadows or visceral performances from Kazan and Ballentine, though. The monster is handled nicely with blurry glimpses before it officially pounces. The darkness and rain add texture and danger, beams of flashlights and Zippo flames shimmering for spotlight focus and interesting aesthetics. Kazan is effective as the beat-down and broken mother with short temper and no chill—something so far against type it’s almost laughable. I hope she’s given more roles like this to move beyond the usual pixie dream girl stereotype filmmakers love to cast her as. She pushes all the right buttons to turn Ballentine into a fierce ball of rage herself. Few child parts go to such extremes, but she was up to the challenge.

The end result isn’t bad; its potential merely creates disappointment. I enjoyed the monster’s involvement as something to fight rather than scare because it’s imperative for Kathy and Lizzy to face it and each other. Tying it into their animosity is even better if only it were handled a bit more intentionally. Bertino does do a great job creating suspense by purposefully limiting tools at his characters’ disposal to the mood’s advantage, though. Making mother and daughter use one door of their car is genius as far as letting Kathy’s controlling nature take over and the rain is a perfect filter for drowning out certain pleas considering Lizzy hates her Mom’s lack of listening skills. But while this is all enjoyable, it ultimately lacks an “it” factor.

The Monster is on DirectTV and available in theaters and on demand on November 11.