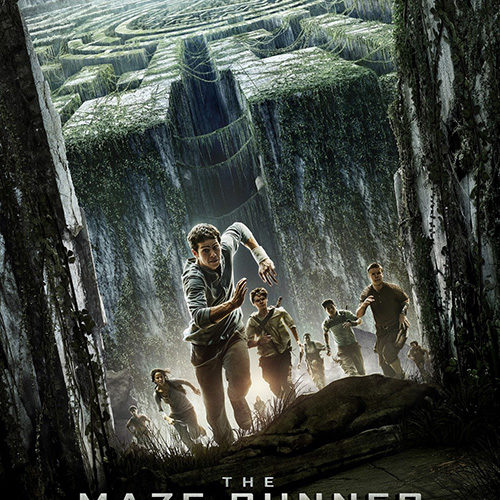 The low, grumbling whine of the elevator creaking to life is the first sound to permeate the darkness that begins The Maze Runner. When Thomas wakes up, he’s in unfamiliar surroundings, trapped within a caged confine and lacking any memories of who he was prior to this moment. When daylight finally breaks in, he’s being hauled out into the light, surrounded by young men of similar age, all of them standing in an idyllic pastorale called The Glade. On all sides are the towering, monolithic walls of the Maze, a labyrinth that cuts them off from any other form of civilization. This is the terse but effective set-up for what ends up being a strong new contender in the young adult dystopia genre, a sturdy and thrilling drama that diminishes early turgid world-building in favor of a ‘boy’s own’ adventure atmosphere.

Based off the novel by James Dashner, that borrowed several pages from Rod Serling and William Golding, the film version of The Maze Runner benefits from a streamlined and low-tech approach to its science fiction. First-timer Wes Ball directs the film with an unforced sense of urgency and uses his background in animation to cleverly establish the harrowing geography of both the Glade and its ominous dangers, as well as the mysterious confines of the Maze, harboring giant monsters that defend its inner corridors. The way Ball uses Dashner’s hit-the-ground-running introduction to dodge the overly familiar monologuing of many YA fantasy endeavors is admirable; there’s a sense of mystery and uncertainty intact, and this allows the audience to relate to Thomas’ own confusion and curiosity.

Both worlds—the Glade and the Maze– will come crashing together, but all in good time. Meanwhile there’s a welcome emphasis on the society that these lost boys becoming men have founded in the absence of guiding forebearers; the script by Noah Oppenheim, Grant Pierce Myers and T.S. Nowlin retains the core of Dashner’s characters, while adding an element of universal simplicity to their actions and motivations. Each of these men, Thomas included, has built for himself an identity out of the social scraps he’s discovered here in The Glade, despite having no memories of a time before. Some of them, like Alby (Alm Ameen), have stepped up as leaders and forced an image of civilization, despite a lack of awareness regarding where that instinctual motivation comes from. Others, like Gally (Will Poulter), the security enforcer, and Newt (Thomas Brodie-Sangster), the second-in-command, are exploring personal strengths within someone else’s adopted structure. Finally, there are the Runners, like Minho (Ki Hong Lee) who use their own physicality and intelligence to protect their own and push the boundaries of the Maze.

It’s the Runners who must navigate the maze, with its shifting walls, dangerous traps, and army of Grievers; the latter are monstrous, mechanical arachnids who wait to deliver a potentially devastating sting to all who venture too far into the labyrinth. Thomas, possessed of the same pluck and self-motivating determination that has blessed many a dystopic protagonist, starts to shake things up in the Glade; he violates Glader law, wins Minho’s respect, and probes at the questions of memory they all have. One day, the elevator deposits a girl—the first the boys have ever seen—into the Glade, and things take a turn for the worse. Refreshingly, this is not because of some hormonal love triangle that develops and tears apart the male camaraderie; rather, Teresa (Kaya Scodelario) has arrived with a message of warning, “Nothing will ever be the same.” Whoever sent that message means it, and soon the Gladers are facing fresh troubles, all the while planning an escape from their cloistered sanctuary. The search for answers is the blood pumping beneath The Maze Runner’s skin, but Ball knows that resolutions to the mystery are not the real meat of the story, and wisely, he’s focused the brunt of his momentum on the characters and their internal revelations; not so much about who they were previously, but who they are becoming, both individually and together.

This aim is bolstered by a surprisingly strong cast, led by Teen Wolf’s Dylan O’Brien, who charges Thomas with a restless, intense charm that drives the movie’s sense of restless wanderlust hiding beneath the survivalist structure. O’Brien has the requisite hunky looks, but he harbors a plausibility that turns out to be the greater gift for this kind of story. He’s matched in this sensible realism by Alm Ameen as Alby, who finds the right tone—of unmoving focus and resolve—and translates it into a turn that is magnetic and fascinating. Poulter, of Son of Rambow and Voyage of the Dawn Treader, makes a tangible leap forward here as a performer; he may be developing into a paranoid, elitist tool, but his progress is organic and believable. Thomas Brodie-Sangster adds the right bit of energy and endearment to Newt, who might otherwise get lost in the shuffle. Unfortunately, Scodelario, so good recently in Wuthering Heights, does get lost; she does what she can, but her character seems to be waiting around for the sequel to completely reveal herself. When someone gets around to adapting a popular franchise, they have several challenges ahead of them, primarily finding a way to replicate the fondness for the characters that the readers discovered on the page. In this particular way, Maze Runner excels, and Ball honors that achievement by keeping the story itself well-paced and moving nimbly forward. Focused on discovery and survival initially, the science fiction elements are allowed to gather at the folds and cracks of the tale, rising to the fore as the more action-oriented structure introduces itself. Ball is a sure-hand at the action, and the skirmishes with the Grievers add a strong sense of horror and desperation to the stakes, as well as a death toll that is often hard to predict. People die in the film, and unlike many similar exercises, those deaths have impact and poignancy.

I was eventually transfixed by Runner’s Old Hollywood matinee antics, and was cheered by the weight of the subtext lingering beneath the thrills. Most young adult stories begin rooted in the idea of forging a sense of self out of the chaos of raw materials and ambition, but Maze Runner never trades up identity crisis for romantic infatuation or narcissistic navel-gazing. It does however, ultimately get trapped in that hoary pitfall of current genre literature; the franchise cliffhanger. It is almost impossible to discern the power and quality of The Maze Runner’s ultimate reveals, because they are only glimpsed, not explained or embellished. The film reaches the end of the events the novel provided for it, and then promptly stops. Until this point, Ball had juggled the tone and intent with canny discretion, so it’s a bit of a shock when we are just routed back out of the theater with the tale not fully told. It’s clear that The Maze Runner was a series going in, but I’m still a believer that each story should be able to stand up on its own. One or two more scenes may have gone a long way to ensuring that not only were audiences sufficiently anticipating the follow-up, but that they left this particular installment satisfied. Nonetheless, the real fun comes in navigating the puzzle, with solving it more the icing on top of a promising, multi-layered franchise cake.