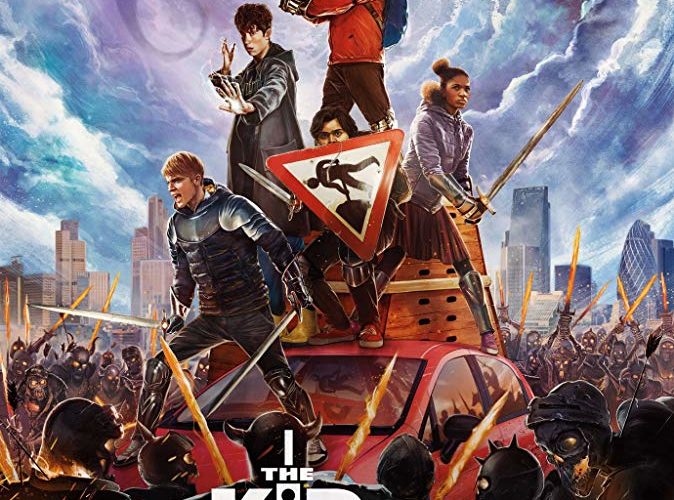 Review: ‘The Kid Who Would Be King’ is a Humdrum Episodic Adventure

Like many directorial debuts, Attack the Block was an ideal venture for writer-director Joe Cornish to exercise his pet obsessions. The cult-film-in-the-making was the product of Cornish’s longstanding cinephilia, inspired by a childhood filled with horror films and Fangoria magazines, and parodic, deconstructive impulses honed on his Channel 4 sketch series co-hosted with his comedy partner Adam Buxton. Attack the Block was generally acclaimed for its genre-bending/mixing and sharp humor, but retrospectively, its sociopolitical filter sets it apart from its contemporaries. Cornish’s not-so-subtle political subtext lends his debut some much-needed weight, especially its final scene: a whole neighborhood cheering for a black teen who’s unlawfully arrested for saving mankind. Strip away the monster-movie elements and Attack the Block falls squarely into the social realism playbook; “marginalized teens living in a council estate forced to defend a neighborhood that rejects them as hoodlums” could conceivably be the premise for a film by Mike Leigh or Ken Loach.

After spending much of the past decade either co-writing scripts for Spielberg and Marvel or being considered by the powers-that-be to helm many Hollywood franchise films, Cornish returns to feature filmmaking with another politically-tinged follow-up: The Kid Who Would Be King, a family-friendly adventure film inspired by the legend of King Arthur. After normal boy Alex Elliot (Louis Ashbourne Serkis) discovers he’s the true heir to Arthur’s legacy when he pulls Excalibur from a stone, he assembles a round table—shy best friend Bedders (Dean Chaumoo) and two bullies-turned-allies (Tom Taylor and Rhianna Doris)—to defeat Morgana (Rebecca Ferguson), Arthur’s half-sister, from summoning evil forces into the world. A spritely, all-knowing Merlin, assuming teen (Angus Imrie) and elder (Patrick Stewart) selves, acts as a guide in their journey, but it’s Alex who must rise to the occasion and save England from ruin.

Though The Kid Who Would Be King follows the standard kid’s movie template—average boy learns he’s special, father issues dominate the emotional framework, lessons about teamwork and respect are foregrounded—Cornish saturates the film with post-Brexit malaise. An animated prologue summarizes a simplified version of Arthurian myth and primes a hero’s return during a time of chaos. An early shot of a suburban newspaper stand (a cheekily antiquated image) sports publications with all-caps headlines with apocalyptic predictions, e.g. “DOOM.” Merlin’s rhetoric emphasizes that Alex must save a “leaderless world” from falling into further disarray. A key confrontation between Morgana and Merlin details the perils of an elder generation arrogantly believing they’re better suited to be the “rightful heirs” to the modern world. Much of The Kid Who Would Be King scans as an earnest plea to Generation Z to clean up the mess that their forebears have created.

Cornish’s tactics can be clumsy, but at least he provides an otherwise humdrum family film with some compelling subtext. (For some reason, the British are consistently better at addressing our modern political hellscape than their American counterparts.) Still, Brexit remains a timid elephant in the room: it contextualizes the action but barely informs it, and, obviously, it’s never openly addressed. It’s disappointing that Cornish tips his hand and doesn’t quite follow through with the metaphor, even taking into account the limits of political speech in a four-quadrant film. At the same time, any more development on this front might make some of the film’s obvious pitfalls more glaring, like how centering a post-Brexit story around an average white kid’s zero-to-hero journey implicitly sanitizes the xenophobic foundation of Britain’s withdrawal from the EU. (Though it’s a safe bet that funding at least partially dictated casting in this case, and, to be fair, family films are inherently sanitary.)

The Kid Who Would Be King primarily falters not because of political trepidation, but because of a shoddy script and inelegant direction. As soon as Alex and his knights set off to save their kingdom, the film becomes a plodding episodic journey that never strays from its predetermined path. Along the way, Cornish checks off a list of broad Arthurian references while hitting the standard beats of warmed-over character arcs. The Kid Who Would Be King’s arrhythmic pacing proves to be a liability, particularly in the homestretch when Cornish establishes three separate endings and decides to power through all of them. Most of the action sequences are either awkwardly staged or visually muddled, and the seams begin to show whenever Cornish relies on the effects team for spectacle. The child actors all hit their marks, but only Imrie makes any impression with his pure wide-eyed whimsy. Stewart’s involvement feels like a complete afterthought and, with regards to providing the film with a wholesome authoritative voice, his warm, wizened visage does most of the heavy lifting.

In a media landscape dominated by IP-driven projects, it’s possible that something like The Kid Who Would Be King, a not-quite-so-original film inspired by Hollywood’s take on the medieval myth with a title that oddly references a 1975 John Huston adaptation of a Rudyard Kipling novella, is the safest bet for someone who doesn’t want to play in the franchise sandbox. But while Amblin-esque adventures are a good fit for Cornish, he’s much better when he’s sitting at the adult’s table, so to speak, or at least the teenager’s table. After all, the proof is in the pudding.

The Kid Who Would Be King opens on Friday, January 25.