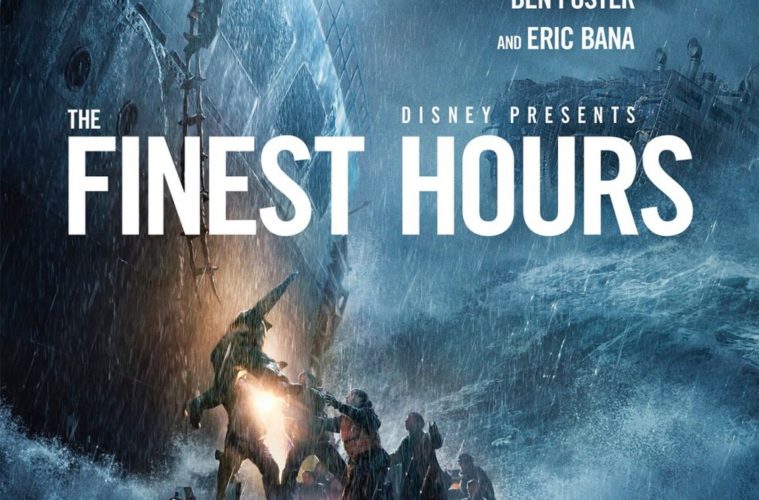 When at the end of Casablanca, Rick puts his unexpected sense of duty before love and tells Ilsa that their problems “don’t amount to a hill of beans in this crazy world,” he might as well have been describing the biggest issue in Craig Gillespie’s The Finest Hours, a lush disaster film that assumes audiences will undoubtedly root for love at all costs, even if it’s just a device used to avoid constructing a solid dramatic structure. Gillespie allegedly set out to tell the story of the greatest small boat rescue mission in Coast Guard history, but in the process ended up making a film about the dullest marriage proposal of all time.

When the film begins it’s 1951 and shy Coast Guard officer Bernard Webber (Chris Pine) is en route to a blind date where he will meet Miriam Webber (Holliday Grainger). Miriam is introduced with all the glamour of a classic movie star, her back to us, as she stands inside a phone booth wearing a dazzling fur coat that takes Bernard’s breath away. As she turns to meet him, her million dollar smile captivates him, and judging by the loving way in which cinematographer Javier Aguirresarobe showers her with light, we know she’s the one for Bernard. After a relatively short courtship Miriam decides to pop the question, and a hesitant Bernard declines telling her she will most likely lose him to the sea. Not one to take no for an answer she finally convinces him, only to find out he needs to get permission from Chief Officer Daniel Cluff (Eric Bana).

Bernard’s plans are sidetracked by a gargantuan nor’easter that manages to split two oil tankers in half. While most of the forces are sent to rescue the people on board the SS Fort Mercer, it takes them longer to realize the SS Pendleton is also about to sink. Sensing that this is his opportunity to prove his manliness and make up for a failed rescue that has made him the most respectable pariah in what seems to be the most polite town this side of Walnut Grove, Bernard sets out to rescue the sailors in distress, along with three crew members (played by Ben Foster, Kyle Gallner and John Magaro).

The film then follows three separate storylines as we see Bernard and his crew’s attempt to survive the monstrous waves on their small boat, the sailors on board the SS Pendleton (led by engineer Ray Sybert played by Casey Affleck), and Miriam’s refusal to sit around and wait for Bernard to come home. Clearly Gillespie intended to deliver the kind of epic that Disney used to specialize in during the 1950s, the corny but lovable kind of films populated with more archetypes than characters who provided spectacle and a reassurance of all-American goodness. The Finest Hours however lacks the self awareness of something like Richard Fleischer’s 20,000 Leagues Under the Sea, which was in love with its own hokeyness. Instead it takes a more realistic approach which clashes with the actors’ techniques. While the rescue scenes are exceptionally shot, and the visual effects are quite remarkable, the predictable plot, and its tonal inconsistencies, make The Finest Hours feel like an endless cruise.