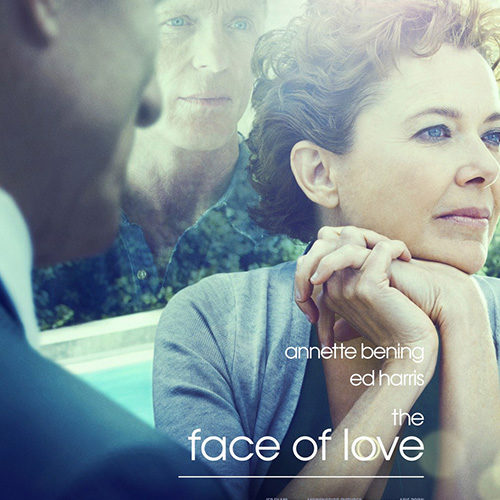 [Review] The Face of Love

Melodramatic confrontations and unrelenting wistfulness fills Arie Posin’s inept film, The Face of Love. Annette Bening stars as a widow named Nikki who, several years after the death of her husband Garrett, meets and woos a college art professor by the name of Tom. The caveat to their budding relationship is that Tom (Ed Harris in dual roles) looks identical to Nikki’s dead husband.

Posin, who also co-wrote the script, has assembled a talented cast to explore the melancholy terrain of love after loss. Bening, who has had great performances dealing with the latent fears of suburban domesticity in films like American Beauty and The Kids Are All Right, is an actress capable of showcasing the turmoil of widowhood. Unfortunately, there isn’t a hint of the actresses’ spontaneity or authenticity here. The film is so forceful and unimaginative in unveiling its mysteries – the art exhibit Nikki discovers her husband’s doppelgänger is named “In Pursuit of the Past” – that Bening and the rest of the ensemble prove uninteresting. The ramifications of falling in love with someone identical to your previous lover is a dynamic core idea for a film, but The Face of Love quickly accumulates emotional subplots that distract from this central idea. Robin Williams, in a completely unremarkable role, plays the affable neighbor Roger; he is also widowed and frequents Nikki’s art-deco indoor pool. Their shared scenes are uninteresting, despite Nikki and Roger’s candid grieving. These characters only offer shallow observations about death and repeat the number of years since their spouse died.

Clearly indebted to Hitchcock’s Vertigo, both films share a character obsessed with recreating the past, museum stalking sessions, and an omnipresent and moody musical score. It’s completely unnecessary to have Nikki cross a poster for Hitchcock’s film to highlight the parallels, but the fact that she does is a perfect example of the film’s vapidity. Key scenes, such as the one where Nikki takes Tom to a restaurant she use to go to with her husband, unfold in lifeless bits of Californian architecture that never reflect Nikki’s inner sorrow.

The suspense is built upon Nikki’s circle of family and friends uncovering Tom’s resemblance to the deceased. What would happen to Tom if he found out? The proposed resolutions to these questions aren’t nearly cinematic or interesting enough to give The Face of Love a watch.

Movies have every right to explore the questions and themes of earlier notable works of cinema. The Face of Love, however, is stifled by its core obsession and ends up a lifeless attempt to recreate the past.

The Face of Love hits limited release on March 7th.