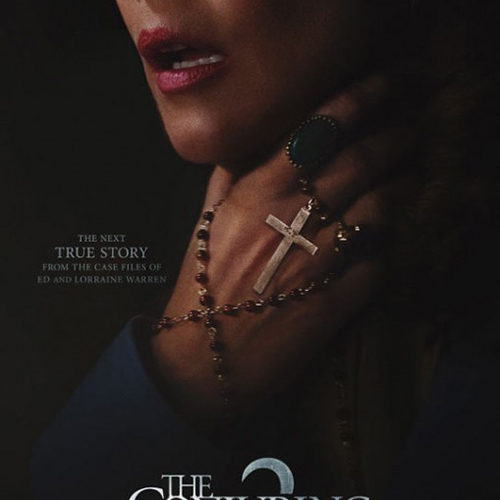 The Conjuring series has developed into probably the apex of contemporary popular horror cinema, about as skillfully made as one can expect a thematically unchallenging series of jump scare setups and payoffs to be. There are times when The Conjuring 2 is an absolute blast, the paranormal chaos hitting Evil Dead levels of physicality. But while I’d like to think there’s knowing humor in, say, a smash cut from a family beholding a dresser prowling across a room of its own accord to them hastily fleeing their house, the story is for the most part strained toward a dampening seriousness.

Part of this lies in the film’s ridiculous 134-minute runtime. After a certain point, surely even necking teens would tire of this, right? A prologue involving the Amityville Horror is utterly superfluous. There’s around a solid hour of the Hodgson family being terrorized by some kind of supernatural presence in their London council house, while back in America Ed and Lorraine Warren (Patrick Wilson and Vera Farmiga) fart around doing little of import. As with the first movie, the plot here is “drawn from” the files of the real-life Warrens, a pair of experienced paranormal investigators. In the proud tradition of Hollywood giving Americans credit for everything, though the Warrens played only a minor role in the historical case of the Enfield poltergeist, here they get to swoop to the rescue of the poor family, since the native paranormal experts are useless.

Except for some reason, the movie spends a really long time with the Enfield entity playing coy with the Warrens, making sure to mess around with the Hodgsons only in ways that could be dismissed by skeptics. This aim of getting the Warrens to leave becomes doubly baffling when it’s revealed (spoilers or whatever) that the demon’s whole goal is to kill Ed (why it doesn’t want to kill Lorraine too, I couldn’t tell you; maybe demons are misandrists). It becomes triply baffling given that one of the few refreshing parts of the film is that it doesn’t bother to draw out the obligatory first-act period in which it’s ambiguous to the denizens of the haunted house as to what’s going on, with the Hodgsons all clued in rather plainly and quickly.

The reason, of course, is padding for the story. So, so much of it. There are discussions about faith and belief which would hold more sway if it weren’t extraordinarily clear that ghosts and such are real, and which do little but pull the parking brake on the film’s momentum. If you squint like you’re looking at a secret image picture, you could sort of justify a reading about a young girl who’s suffered trauma needing someone to listen to her — young Janet Hodgson (Madison Wolfe) is shown to have been affected by her father leaving the family. But that falls apart in light of how, again, this family is in fact just a tool to get at the Warrens. Also, constructing a child trauma fable in which the Catholic Church (the Warrens’ backer) is a positive force is ruinously messed up. The movie’s villainous force most often takes the form of a demented nun ripped straight from the advertising for American Horror Story: Asylum, which Lorraine identifies as a “blasphemous” strategy. But is an evil nun really a subversion of an icon of institutional comfort anymore? Or is it just sensible to distrust nuns as a rule?

Constructing cinematic haunted house rides is old hat by now for director James Wan, but while The Conjuring 2 smoothly goes through the motions of setup, building anticipation, and payoff in myriad ways, the slickness of the production interferes with any proper sense of dread. The audience is made all but omniscient and omnipresent, as the camera glides through walls and windows to show us what’s happening all over the Hodgson house. The point of view switches freely between the hapless protagonists and the demon, slasher-style. And it’s less a vehicle for dramatic irony or tension than it is the movie simply doing whatever it feels like at any given time. For me, this is anathema to immersive horror atmosphere. I won’t say, “Well this movie DIDN’T SCARE ME, NUH-UH,” because any critic who does so is being a dullard who misses the real point of horror, but I was terrifically bored through most of The Conjuring 2.