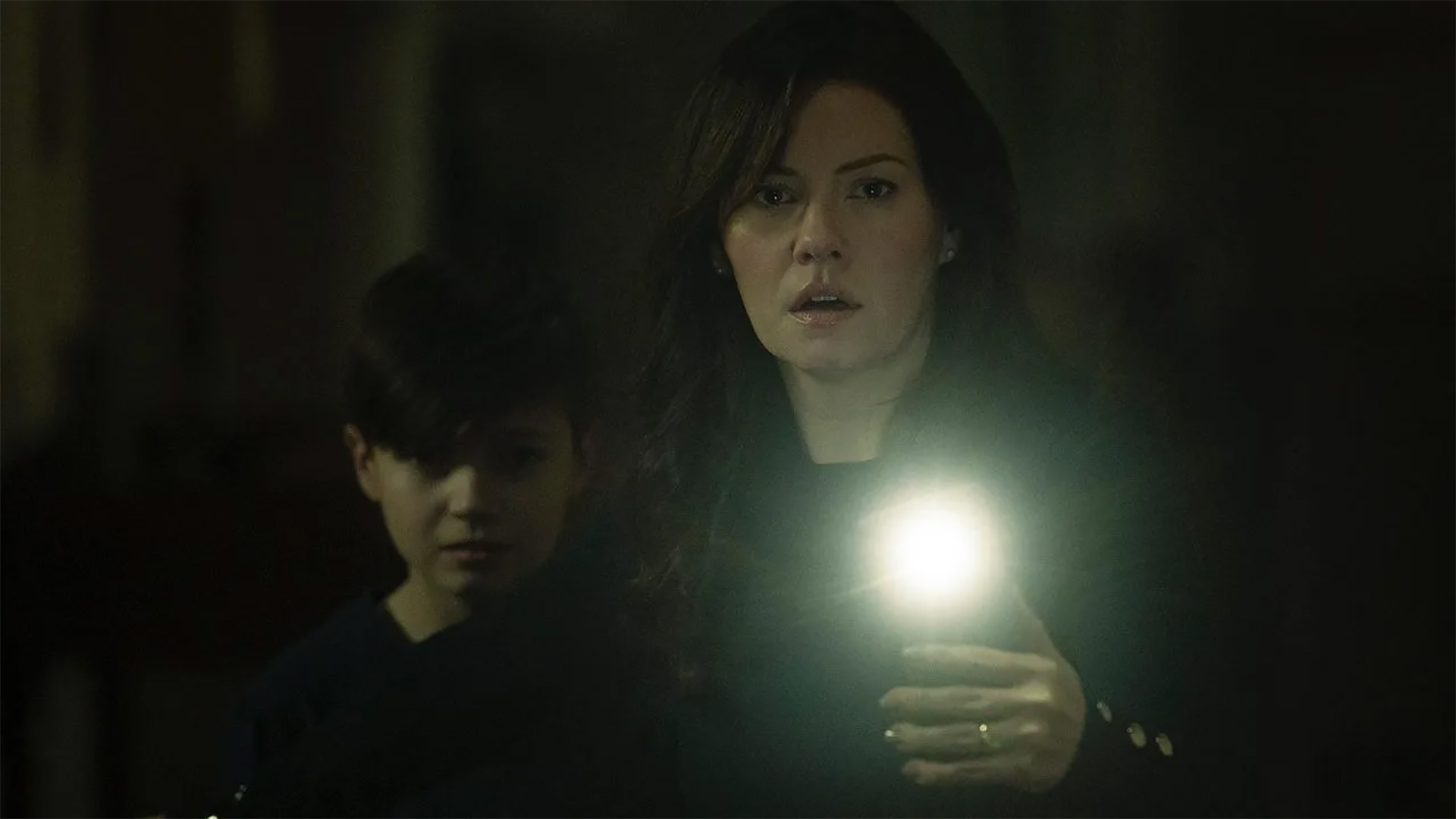 Keira (Elisha Cuthbert) and Brian Woods (Eoin Macken) are masters at their craft. Their marketing firm has gone viral with campaigns that infiltrate the psychology of their audiences in ways few can—at least that’s what we’re supposed to glean from a crucial pitch (depicted with hollowly superficial ad-speak tropes) that will apparently “make or break” the company despite the couple having just moved their family to a giant Irish mansion on a whim. That last part doesn’t really scream “we’re one client away from bankruptcy,” does it? Writer-director Brendan Muldowney hopes we won’t look that closely, though. Their job and this sudden move are only meant to set up the horror to come courtesy an alchemy hotspot that serves as a mysterious gateway to Hell.

Welcome to The Cellar, a film full of thought-provoking ideas that never quite gel into anything more than another example of missed potential. Maybe it was the triangle carved into the molding atop one of the Woods’ new home’s rooms, but it often seems like Muldowney is preparing for a descent into the sort of hellish dreamscape that made The Void such a memorable throwback a few years ago. The concept of a mathematical equation that opens alternate dimensions is great—only augmented by some nice moments of atmospheric dread via their ten-step staircase suddenly descending into an abyss much deeper than the concrete floor Keira et al. know should be there. I waited for the darkness to let chaos reign.

Don’t make my mistake. Don’t anticipate more beyond the rather familiar haunted-house clichés of a family falling apart. The math, Hebrew, and occult allusions are mere window-dressing for a fracturing mother-daughter relationship that has become exacerbated beyond repair, thanks to a high-pressure career devouring any time that might have allowed them to heal. Ellie (Abby Fitz) feels betrayed by this uprooting. She sees it as selfish on behalf of her parents and further evidence of why she’s embraced a life of anarchy as a means to fight back against the capitalistic machine to which they have willingly become cogs. That’s the conclusion an ankle tattoo has me jumping towards; this film seems deathly allergic to any character development that isn’t skin-deep.

Their pitch is so important is because it just so happens to take place the morning after the move. Perhaps their schedule got shifted last minute, but choosing to bring your two kids (Ellie and Dylan Fitzmaurice Brady’s younger Steven) to an unfamiliar place, in the middle of nowhere, only to knowingly abandon them at night seems more like a convenient plot device than the actions of artistic geniuses doing everything they can “for family.” So while mom and dad do their thing at the office to ensure the next day’s meeting goes off without a hitch, Ellie is lamenting her fate as Steven uncovers creepy accoutrement. A skull leads to a victrola. The mathematical incantations on its record triggers a power outage. And Ellie disappears.

It’s an effective scene, Ellie’s fear and Keira’s frustrations epitomizing their dynamic right when their bond is severed. Creepy factor is high in much of The Cellar, making this experience worthwhile—if only to show the promise Muldowney has as a filmmaker if writing and pacing issues get sorted. Because once Ellie is gone and Keira devotes herself to finding her, the story starts moving along a stuttering conveyor belt of checkpoints devoid of breathing room. Engravings lead to research on previous owners. Identities lead to semiotics. Work becomes a resource for translation, experts add clues (Aaron Monaghan’s Dr. Fournet is laughably written as a genius who can “see” equations’ “shapes” after a car accident), and Keira tirelessly deciphers all.

Is she losing her mind? If Ellie ran away before, jumping to wild conclusions about portals and monsters is hardly the sanest place to go upon hearing from the police that there’s no evidence to transform the case into a crime. Maybe the stress has her cracking. Maybe Brian will have to step in before things get even worse. Or maybe Steven will disappear, too, and theories about ancient demons will suddenly make more sense. Unfortunately we’ve suffered too much whiplash courtesy convenient characters and bow-tied explanations to really care anymore—least of all about Ellie’s wellbeing. She becomes a pawn to the bigger mystery of what might be hiding in that basement and why chanting numbers gives it strength. The Woods family becomes collateral damage itself.

That’s okay if the bigger picture takes over—again, like The Void. To ask us to care about these characters and their communal bond, however, conflicts with that ability; it places them above the whole rather than its internal propulsion. Investment is rendered moot when focus constantly shifts from them to the mythology to them and back again. It destroys all momentum, causing a captivating finale to lose its impact as a showstopping sequence by becoming yet another instance of this family proving they’ve been written less like a cohesive unit built on love than a nondescript catalyst going through pre-planned motions for our benefit. Muldowney tragically treats them more like integers in an equation than people. It all adds up, but I sadly felt nothing.

The Cellar opens in limited release and streams on Shudder starting April 15.