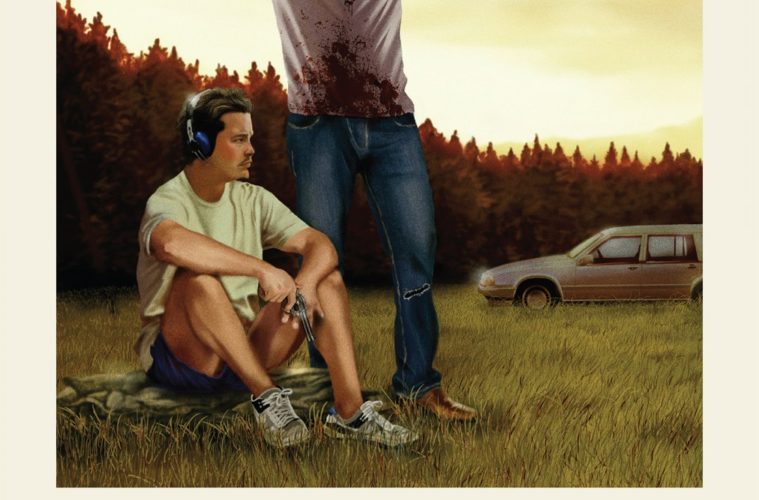 It’s hard to give any new film about zombies the benefit of the doubt. What started as a politically charged venue to comment on society has pretty much been warped into an entertainment franchise providing viewers copious amounts of guilt-free blood and gore in the name of survival. Every once in a while something fresh arrives—a comedic romp like Shaun of the Dead, the small screen writing clinic of The Walking Dead, enhanced mythology for more authentic thrills a la 28 Days Later, or even romance courtesy of Warm Bodies—but for the most part it’s simply more of the same. Suffice it to say, hopes weren’t too high that a new dramatic look filmed for a minuscule six grand would add anything new. This is why we watch before passing judgment.

Following the journey of two minor league ballplayers from Pittsford, writer/director Jeremy Gardner‘s The Battery is a slice of life inside a dead world. With no time wasted explaining what transpired to allow the undead free reign or how Ben (Gardner) and Mickey (Adam Cronheim) stayed alive, it isn’t long before we realize these guys don’t actually like each other too much. The former revels in his new hunter/gatherer role roaming the country’s desolate landscape while the latter would give anything to spend one night in a bed. Ben wields his wooden bat and revolver to maim and shoot every zombie he comes across; Mickey remains quietly seated with headphones and his Discman, looking anywhere else but at the carnage. Months since they’ve seen another living human, however, they’re all each other has.

For the first three quarters of the film, Gardner makes sure we realize the predatory hoard isn’t his prime directive. While they may be the reason Ben and Mickey are thrust together, The Battery is more concerned with how humanity endures despite the creatures’ destructive might. Life isn’t as idyllically simple as many would have us believe either—mankind is and always will be selfish to a fault. It’s nice to assume we’d band together into some ragtag army taking back what’s ours, but it isn’t so easy when push comes to shove and a kill or be killed mentality is adopted. We take care of our own and to hell with the rest. Charity quickly gets thrown out the window and how we adapt to this realization will determine how long we last.

Our leads’ dynamic may somewhat be generic, but it’s one we know and understand. Ben’s realism has kept them alive while Mickey’s hopeful idealism gradually becomes a liability they cannot afford. So, when the two find a couple walkie-talkies in a garage they raid, what follows proves an intriguing philosophical exercise asking whether what makes humanity special can also be its greatest shortcoming. We care—implicitly—about our species to the point of willfully sacrificing ourselves for a complete stranger as a reflex. Cold-heartedness is taught to be a blemish, a trait for the amorally cruel criminals we jail far away from society so as not to pollute the compassionate. People forget, though, that even though this country is a pillar of strength and a self-proclaimed protector, we’ve used savagery every step of the way.

It’s unsurprising then that Annie (Alana O’Brien) and Frank (Larry Fessenden) refuse to help once talk of their sanctuary is overheard on the walkies. Never before now is the difference between Ben and Mickey more apparent, the former calmly smoking his cigarette as the latter pleads to static. Ben has accepted the fact they are alone in this fight—relying on anyone else would only introduce too many unknowns. But no matter how hard he tries to explain, Mickey cannot give up hope. Uninterested in becoming an analytical robot devoid of emotion besides giddy laughter at the absurdity of their situation like Ben, Mickey tirelessly calls out to Annie each night. He drowns in the emotional melodies of his music and yearns to hold onto the last remnants of his soul slipping away.

Gardner leads us towards a very dark and depressing resolution, one nobody can argue isn’t authentic. As Ben and Mickey warm to one another and understand where the other comes from, you almost believe things will get better. Maybe their team will gel together and perform like the well-oiled machine they were a part of on the field—Ben’s catcher constantly helping to prop his pitcher up as Mickey strives to live and breathe and assist in their partnership so they may brave the abject isolation facing them every morning in New England’s great abyss. But like every story built around mankind prevailing over their trials and tribulations, one more conflict must be introduced to fully comprehend the direction our heroes have taken. One more test to show whether they’re ready for the next step.

Enter a scared family man with nothing left to lose in Jerry (Niels Bolle) and our boys’ fate is sealed as the final act puts Gardner’s message into focus while Ben and Mickey are trapped in their car surrounded by the enemy. With Ben equal parts comical, determined, and utterly compassionate despite the hard choices he’s willing to make and Cronheim’s Mickey forever unsure about how strong he’ll allow himself to become, the pair is constantly butting heads like anyone would in such an impossible situation. Add fantastic sound design that plays with headphones creating isolating worlds, humorous gags like Mickey’s first kill and Ben singing along to Rock Plaza Central, and chilling actions on behalf of self-preservation and The Battery will surprise you with its poise, efficacy, and bravery to do what must be done.