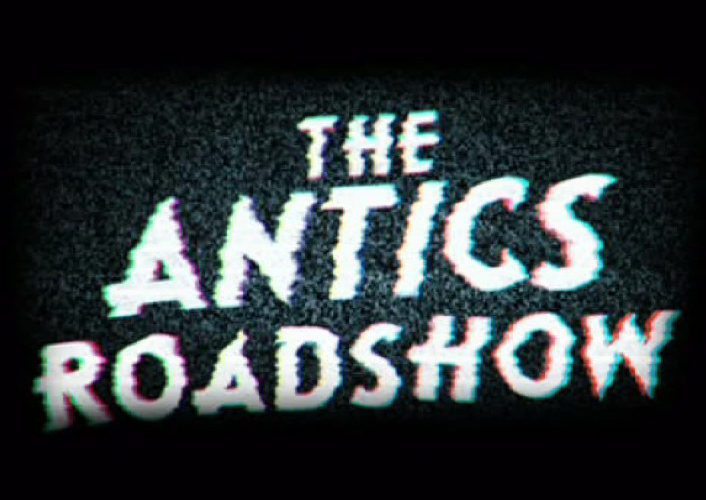 Too often we dismiss good art because of expectations, those trifling bits of anticipation we drag around and throw in front of a film’s opening credits that will assuredly color any opinions we have of the film itself. The Antics Roadshow is a perfect example of this phenomenon. It is the second directorial effort from Banksy, the renegade anarchist street artist who turns advertisements into on their heads, make barren walls into political satire, and takes the opportunity of doing a couch gag on The Simpsons and using it to show the arduous work dispatched by an uncaring multinational conglomerate to line their pockets with money from selling more Bart swag.

Banksy’s first foray into film direction, the excellent, perplexing, and fun Exit Through the Gift Shop, was less a personal voyage through the eyes of Banksy and more of his retelling of another person’s story. Taking footage filmed by Thierry Guetta, AKA “Mister Brainwash” and using it to tell the story of how an art insider became one of its biggest names, Banksy was mostly relegated to filming talking heads and tidy editing. So, when I heard of The Antics Roadshow, co-directed with Gift Shop producer Jaimie D’Cruz, I hoped it would be the singular vision of this acclaimed artist finally translated to digital celluloid. What I got instead was a television program, a sort of travelogue through some of the most interesting, complex, silly, nonsensical, brave, and foolhardy stunts in modernity. It’s a curious mix of actions and causes, set side-by-side with no specific overall point to be made. At least, not one that is wrapped in a bow and given to critics to easily pass judgment. Instead Roadshow is a bit of a happy mess, one that approves of any sort of prank regardless of its overall message (if it, in fact, even has one).

The opening makes light of this fairly well. We are shown footage of the London MP Riots in 2011, where youth  took to the streets set to destroy anything in their paths in an Id-driven burst of ferocity. The voice over relays, “in the good old days, a week or two ago, people didn’t take to the streets to take stuff, they took to the streets to give something back.” What follows is the construction of a machine that makes perfectly-realized spray paint rainbows on walls. Illegality for a cause, folks!

There is ample amount of fun to be had in this collection. Amidst the hodge-podge are foreigners like the French satirist/pain in the ass Remi Gaillard, who shows off YouTube hits like his real life Mario Kart-ing and invasion of a grocery store dressed as Pac-Man (with hungry ghosts just in toe, natch). The silliness is amped up with Gaillard’s translation read in English avec un heavy FRENCH ACCÈNT! Noel Godin, the Belgian “eccentric” who threw the inaugural custard pie into the face of one of the world’s rich, powerful, and rich and powerful, gets a similar silly treatment as he discusses the multi-pie attack coordinated against Bill Gates.

While those pranks are long on merriment and short on actual statements, there are other “pranks” featured that gained actual political capital. The most impressive of them involve a quartet of English women in 1996. Upset that their country was doing out arms and helicopters to Indonesia in order to attack the people of East Timor, they took to their local air hanger with some hammers and beat holes into a chopper that would soon be exported for the war effort. This story is couched comfortably between a group of Russians who ingeniously use some paint to turn a draw bridge into a giant penis pointed at former KGB headquarters and a guy who once posed as a member of Manchester United for the team photo before a Champions League match. Make heads or tails of that one. Other notable adventures include a man somehow making his way into Queen Elizabeth’s bedroom, shown in wonderful Monty Python-esque animation; Improv Everywhere’s annual no-pants subway ride and Grand Central freeze gag; and an American ex-pat who decided to stick a shark’s fin on his roof, upsetting the uptight zoning tsars in stuffy Oxford. But there are also more subtle works afoot, such as a group that arbitrarily re-organizes parking cones and tape and watches from afar as people blindly follow the lines, or someone taking umbrage at France’s anti-burqa law by spray painting burqa-like covers on advertisements in the subways.

The Antics Roadshow can be summed up with one particular bit of branding and viral marketing that took place before the terms were even coined. George Davis, a man convicted of armed robbery, was said to have been incarcerated unjustly, and his friend took to the streets to get word of the injustice out. “George Davis is innocent ok” popped up all over England, gathering a huge following that eventually landed the term in the Oxford dictionary. After reaching critical mass, George Davis was let out of prison, serving only 18 months of his 20 year sentence before being released to throngs of jubilant people.

Then, the film notes almost in a throwaway, George went on to “commit a string of armed robberies.” Lesson learned: don’t let a story get in the way of a good prank.

The Antics Roadshow is now available on VOD.