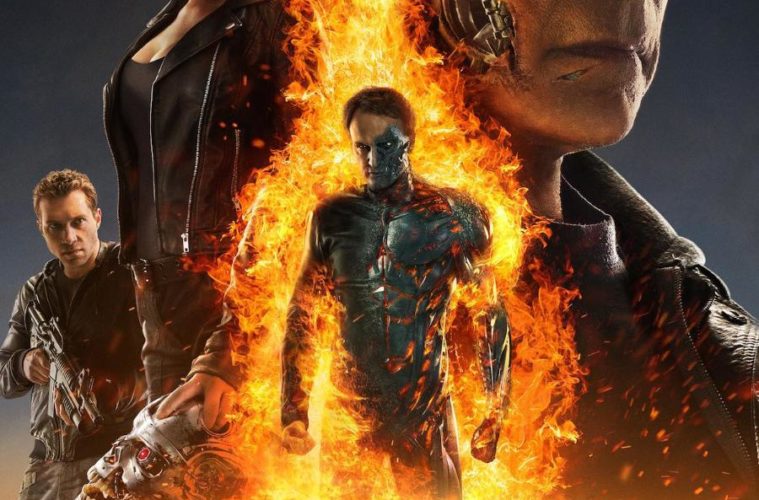 Much of the success attributed to Terminator: The Sarah Connor Chronicles stems from it using its time travel-centric mythology to erase the franchise’s failures—mainly Terminator 3: Rise of the Machines. You’d think Terminator Salvation would have followed suit, but for whatever reason it held onto that sub-par entry if only through the character of Kate Brewster, otherwise known as Mr. Savior of Humanity John Connor’s wife. The real issue, however, was that it also retained a desire for big theatrics at the detriment of story. T3 had its unnecessarily complex T-X (an impractical chainsaw to T-1000’s sleek blade) and Salvation its human/machine hybrid propelling a plot intrinsically bound to its planned but never realized sequels. Well the property’s latest owners said, “No more.” They’ve embraced Chronicles‘ creator Josh Friedman’s lead to rejuvenate this cinematic icon once more. It’s crazy how many times the franchise changed hands with bankruptcy auctions and a myriad other issues along the way. You may remember Joss Whedon famously offering to buy the rights for ten grand when The Halcyon Company sought upwards of seventy million. Eventually Megan Ellison’s indie darling Annapurna Pictures won the rights before she too relinquished financial obligation, leaving production costs to a partnership between her brother’s company Skydance Productions and Paramount Pictures. That’s a lot of creative minds and visions. And let’s be honest, very rarely is success found when a huge property seeks writers and directors before having a concrete direction. Luckily for them and us, James Cameron collaborator Laeta Kalogridis (Avatar and Battle Angel) and her writing partner Patrick Lussier were entrusted to find the spark. Now we never have to watch T3 or Salvation again.

I’ll admit that I joined the rest of the chorus screaming “bad fan-fiction” upon hearing Terminator Genisys‘ plot synopsis. The titular machine (Arnold Schwarzenegger) once sent to the past by sentient machines to assassinate a waitress with no inclination of the role she’d play in mankind’s annihilation and later to protect her son was now visibly aged and Sarah Connor’s (Emilia Clarke) “Pops”? Seriously? Who thought that was a sound idea? Without context it comes across as a device to allow the ex-governor to cash-in on a foolproof project unbeholden to actual critical acclaim. It looked like an easy out to change things up a bit by utilizing the umbrella concept of “multiple timelines.” The funny thing in hindsight is that my preconceptions of laziness became a key proponent of my enjoyment. Unintentional bait and switch at its finest.

Genisys is self-contained with an expository introduction re-acclimating us to Terminator lore, multiple reenactments of scenes from The Terminator to gather our bearings, and the type of ending we’ve wondered about being possible for thirty years. It also leaves many questions unanswered to give us something to look forward to in subsequent films while forcing us to accept how some things don’t need explanation. Hypothesizing about who sent this version of Schwarzenegger’s T-800 keeps us alert, but at the end of the day his being there is what matters. It isn’t a plot hole—it’s a yet unsolved mystery. All we must concern ourselves with at present is how he’ll protect Sarah from a future no one knows anything about. This MacGuffin therefore hinges on what came before it while also erasing it in one fell swoop.

Kalogridis and Lussier expand upon the as yet only alluded to potential of parallel dimensions and diverging consciousness. We see it early too as Kyle Reese’s (Jai Courtney) destined journey to 1984 is interrupted by a nexus point event pushing memories of a childhood he didn’t experience into his head. Every action brings with it an infinite amount of consequences so if John Connor (Jason Clarke) is attacked after Reese is already sent—theoretically ensuring Connor’s conception—does it matter? In simplistic terms no. For all we know John got killed in the first film’s future. Just as one potential outcome leaves everything fate declared as gospel, however, another sets into motion a series of events that turns “truth” upside down. Certain integral moments stay intact (Skynet finding a way), but the details surrounding them don’t.

I’m going to leave it at that because I do think my enjoyment level directly correlated to my being in the dark to what the public “fan-fic” sensibilities of the plot deflect. Sarah, Kyle, and “Pops” band together, use Cyberdyne tech against the company, and face-off opposite familiar foes (Byung-hun Lee‘s T-1000 is slick) and new (a Terminator similar to the 1000 series but made from a magnetic alloy for unparalleled strength and consciousness). Alan Taylor shines by bringing his experience from orchestrating massive set pieces on Thor 2 to a more grounded realm of earthly familiarity. We’ve got a truck chase, bus chase, and helicopter chase sprinkled in with physically punishing battles between Terminators and humans alike. And just as volatile as on the outside, the filmmakers portray the inner struggle of destiny with equal pain.

There’s also an obvious appreciation for Cameron’s vision in aesthetic, science fiction ideals, and action. Some sequences go overboard, but none turn cartoonish like the previous two installments (despite Salvation hoping for Saving Private Ryan grit). Kalogridis and Lussier also infuse a healthy dose of humor—mostly via Schwarzenegger’s robotic delivery—that fits tonally as stress relief rather than distraction. I wish they wouldn’t have shoved in every iconic line again, but fan service is a prerequisite. Bringing in the Dyson family (Courtney B. Vance‘s Miles and Dayo Okeniyi‘s Danny) is a nice touch and J.K. Simmons‘ O’Brien is a delightful anti-Dr. Silberman. As for the rest, Genisys stays true to Skynet’s cause through a lens of our 21st century’s voluntary connectivity. We now welcome Judgment Day with open arms and the series has adjusted to reflect that irony.