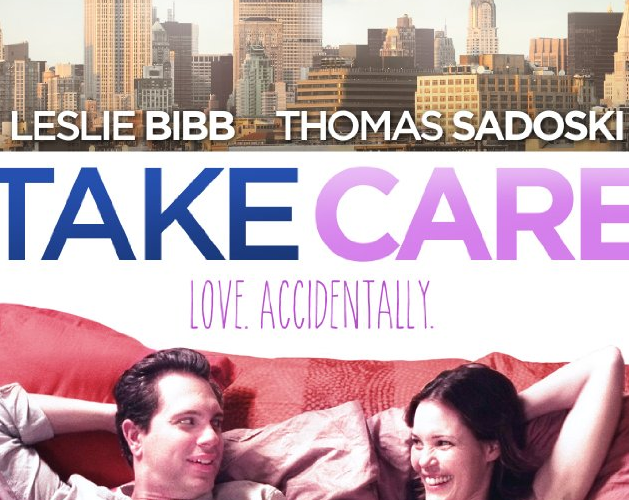 Needy and broad, Take Care is an exhausting experience for all the wrong reasons. Expanding what might make for an effective 20-minute short with carefully observed characters into a feature-length screenplay, Liz Tuccillo’s directorial debut is simply all over the map; mixing broad comedy and drama, it never quite finds its footing.

Staring Leslie Bibb as Franny, a women who is never quite sure what she wants thrown into an unfortunate situation, she’s bed-ridden with a broken leg and arm. She has to rely upon the kindness of her sisters to survive, confined to her fourth-floor New York City walkup. Guilt tripping her ex-boyfriend Devon (Thomas Sadowski) in the film’s most effective scene, her New Jersey-based sister Fallon (Nadia Dajani) is off the hook, as is her jerk neighbor Kyle (Michael Stahl-David). This leads to the embrace of a sitcom-inspired approach where folks continue to drop by (including a gay best friend that appears for a scene and vanishes). The film never finds the right note, immediately doomed from the opening sequence in which Kyle reluctantly transports Franny on his back up to her apartment. Left alone to her own devices, Franny regretfully is rather dull, preferring to watch TV versus doing something meaningful while held up. Out of an extraordinary sense of guilt, Devon — a cancer survivor who was taken care of by Franny for two years — reluctantly agrees to take care of her. Withholding his agreement with Franny from current girlfriend Jodi (Betty Gilpin), his encampment at Franny’s grows entirely predictable, leading to an disturbingly odd, over-the-top moment with no basis in reality.

Initially the story structure suggested perhaps the material may be better suited for a web series rather than a feature-length story, while Franny’s self-deprecating antics may be digestible in small chunks, act one thankfully reaches an effective and heartbreaking peak with the revelation of Devon and Franny’s relationship. He, after all, beat the odds to found a successful internet start-up, and is portrayed with a glimmer of complexity by Sadowski, against the odds of otherwise lackluster direction. Franny’s ask within that context does not seem unreasonable.

The right note here is critical: a compelling comedy with drama escaping sitcom tropes could be made of this material in the same contained setting. If a movie character ever needed a pet as a side kick, Franny is surely it. Dull and self-centered (sometimes rightfully so) the entire film hinges upon our feelings towards her and, truth be told, she could use a few interesting hobbies. An events coordinator for a public relations firm, despite her present condition, she has coordinated an awfully uneventful life often defined by others — perhaps she has never been truly independent. If anything, she should be using this time (and ours) to grow as a person, to understand herself. While she makes a full physical recovery as you might predict, her character does anything but.

Take Care is now playing at the Quad Cinema in New York and on VOD.