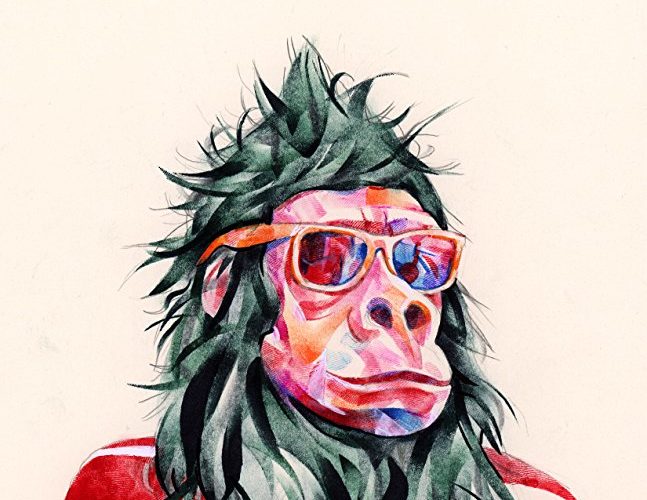 Vine fad “Simply Sylvio” and its film adaptation — more plainly titled Sylvio — by directors Albert Birney and Kentucker Audley offer a tense amalgamation of lowbrow sensibilities and highbrow execution, which the anthropomorphic gorilla then beats into submission. In a film about dualities, it makes sense for Sylvio to tread lightly despite its loud premise, concerning the budding relationship between aspiring talk-show host Al Reynolds and the eponymous gorilla, as well as their fame, derived from the success of a recurring segment on the show in which Sylvio goes bananas by breaking stuff on-screen.

It is difficult to speak on the film without considering its possible influencers, most evident in something like Comedy Central’s The Eric Andre Show, or Adult Swim’s Tim and Eric’s Awesome Show, Good Job! which the film replicates aesthetically with The Al Reynolds Show, and thematically with its deadpan parody treatment of public access and late night talk shows with similar absurdist comedy sensibilities.

Audley and Birney are no strangers to digital age entrepreneurship: the former, who also stars as Al, has claimed a stake of fame in the independent scene through his creation of the “movies” clothing brand, which prints the word “movies” cleanly and uniformly on basic articles of clothing and has relied on viral marketing and tongue-in cheek humor for its lowkey success, and the latter ran the original Vine account to a half-million followers. Here, they implore us to simultaneously look deeper — past the superficiality of clicks and brand management to the sense of imprisonment that can arise due to demands of content from audiences.

Sylvio is deeply conflicted, forced to choose between his artistic interests — a wholesome, and altogether unsensationalized puppet show titled The Quiet Times with Herbert Herples that lives up to its name — and the characteristically violent ape stereotype he embodies on Al’s show. It makes sense that he is what he is; a gorilla is just human enough representative of a sort of regress that strikes fear, both physically and ideologically. That he strives to create actual art and escape his categorization is a beautiful sentiment that almost parallels the characters’ metatextual movement from six-second looped clips to the big screen.

Much is done to blur the lines between fiction and reality. A score alternates between ambient noise and playful syncopations, emphasizing a calm, dream-like quality to the images, which always slow down when they portray scenes of conventional action. Sylvio is evidently a man in a monkey suit, but meshes well into the quaintly designed dollhouse sets, which are equally as cartoonish. Mostly, the humans embedded into this constructed environment bring out Sylvio’s humanity. The supporting performances all maintain a sort of actorly quality that contrasts Sylvio’s performative limitations. Audley, most of all, nobly commits to the gambit with the only casual human performance, developing an uncanny chemistry with the mute monkey. The two gain an unspoken understanding and both work selflessly to actualize the other’s dreams. Their bromance, against all odds, manages to be touching, and provides a wholesome emotional core to a modest delicacy of a film.

Sylvio is now in limited release.