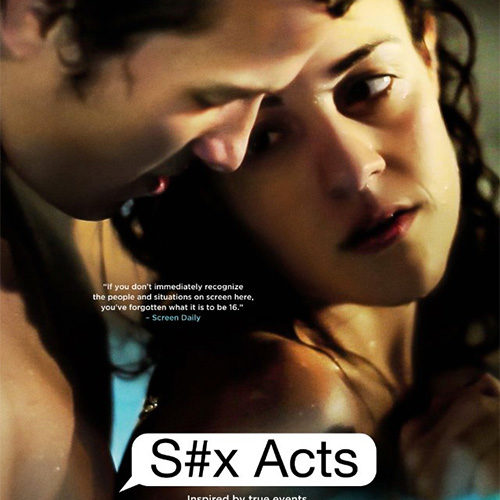 Director Jonathan Gurfinkel‘s debut feature Shesh peamim [S#x Acts] deals with the important topic of teenage sexual abuse in a way that better make you uncomfortable by its end. Told in six acts with escalating encounters between transfer student Gili (Sivan Levy) and the popular group of boys she hopes to infiltrate in order to not be labeled “the weird girl” at yet another school, we watch as infatuation evolves into sexual favors until the moral gray area at play can no longer pretend what’s happening isn’t rape. Writer Rona Segal pulls no punches to keep everything in an authentic light of emotionally delusional ambiguity—the predators never growing “violent” while the victim’s complacency keeps her from being wholly innocent. It’s a nightmarish series of hook-ups between kids lacking the maturity to acknowledge the horror of their actions.

The film becomes a depravity barometer of sorts to see how ignorant you are to the reality depicted. Which act finally makes you realize something is wrong? Do you grow disgusted at the first when best friends Tomer (Roy Nik) and Omri (Eviatar Mor) call Gili to alleviate their boredom while their dates watch a movie, hoping to prey on her desperation in the mall parking lot until the girls exit the theater? Do you wait until the boys blatantly pass her amongst each other with sexualized compliments gradually tearing down her defenses? I sincerely hope you your revulsion doesn’t hold off until the threat of a bathroom orgy filmed on a cell phone arrives because I’d have to question whether or not you engaged in similarly heinous ways yourself, somehow oblivious to its destructiveness.

Because here’s the thing—you don’t have to read the press notes to realize Gurfinkel and Segal’s script is based on researched fact. No one should be naïve enough to believe events identical to those onscreen aren’t happening at your child’s school or God forbid with your own son or daughter. The sad truth is that these boys honestly believe they have a right to coerce flirtatious girls into doing things they aren’t committed to solely because they’re “teases.” And the girls doing the teasing don’t understand the prospect of potential sexual rendezvouses isn’t the only way to make friends with the “cool” kids let alone acknowledge that any guy saying it is isn’t cool anyway. The result becomes a gruesome game between low self-esteem and entitled confidence culminating in tears or worse for one or all.

It’s discomforting to watch Gili’s desire to fit in devolve into an emotional prison she cannot bring herself to escape. We know she likes Tomer and yet watch as she gravitates towards Omri’s advances as a ploy to will his friend into liking her back through jealousy. When Tomer’s indifference proves concrete, we see her longing to be Omri’s girlfriend despite the way he acts because she “knows” it’s all a front. His kind words and affection have her thinking he cares when he’s simply helping her feel wanted and in control. So when rumors fly and videos distribute, Gili has no choice but to backtrack her feelings to trick everyone—including herself—into believing she’s the one using him. While both can play dumb all they want, deep down they know exactly what’s happening.

Where S#x Acts travels is tough to swallow after a third friend (Niv Zilberberg‘s Shabat) is introduced as the first of many outsiders looking to get in on the action Gili’s new reputation provides. And it only gets worse when Omri’s little brother’s (Tal Grushka‘s Barel) lust enters the fray, precipitated by their father’s (Eran Ivanir) pride in his older son’s libido and their mother’s (Ronit Yudkevich) troubled silence by his side. It’s enough to see how blind parents are whether they’re involved in their kids’ lives by throwing parties or checked out like Gili’s absentee role models. She as a result is desperate for any love available while Omri feels entitled to enjoy whomever’s love comes his way, each possessed by a skewed enough idea of love’s meaning that they’re combination can be nothing but toxic.

While the film has very little nudity, each of the six acts does possess a graphically sexual exploit made more troubling by the age of those involved and their conflicted feelings while engaged in whatever deed they see as unavoidable. Nik plays Tomer’s indifference with a tinge of disgust at what Omri’s doing; Zilberberg’s Shabat tries to be sympathetic as though he only cares about Gili’s well-being when things couldn’t be further from the truth; and even Mor’s Omri has moments exposing the possibility for remorse until his aloof demeanor and cavalier attitude towards this girl can’t prevent you from despising him as the subtle monster he is. And the girls in chapter four aren’t much better, jealous of Gili’s conquests and connections but readily willing to turn away when they know what’s happening isn’t consensual.

Gili is the person at the center of everything, however—a girl helpless from accepting the attention of boys her peers would die to receive that does everything asked of her without realizing her complicity makes her more of a pariah than if she said no. Levy is heartbreaking in the role, turning a beautiful smile of inclusion at the start into a lifeless grin of someone too defeated and depressed to acknowledge what’s happening is wrong. She believes it’s her fault, taking the boys’ taunts of her being a tease to heart so that she’s forced to make good on her “promises” to prevent creating enemies. Her life is a vicious cycle out of control—a startling real look into the teenage world that will keep parents up at night unsure of how close to home it hits.