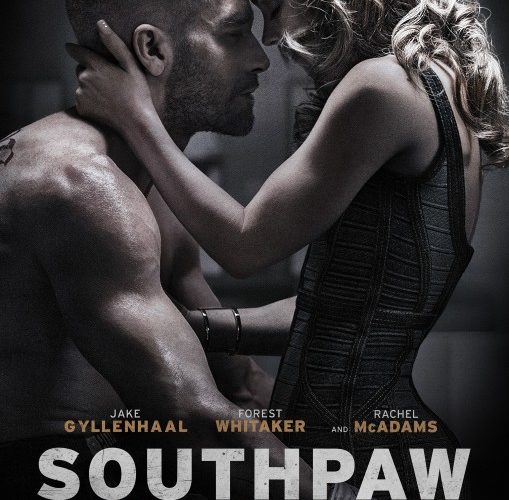 The origins of Southpaw are interesting because it was born from screenwriter Kurt Sutter‘s want to collaborate with Eminem. Now try to picture Marshall Mathers after peering upon any of the bloodied and crazed publicity stills of his replacement Jake Gyllenhaal without laughing. Sutter has said the boxing aspect of the script was meant as a metaphor for the rapper’s personal struggles and the fight for his daughter is exactly that. He hoped the project would prove a thematic continuation of 8 Mile and for almost seven years it seemed possible. The result would have surely turned out differently from what director Antoine Fuqua has delivered with Gyllenhaal, but I could see Eminem exceling in the role. After all, while the pugilism is integral to the plot, the movie is ultimately more about love and family outside it. That sensibility will be familiar for fans of Sutter’s recently completed Sons of Anarchy. The show had a lot more sentimentality than was to be expected and it worked when spread out over ten-plus episodes a season. It doesn’t, however, succeed quite as well when compressed into two-hours like this debut feature script. Boxing films already possess a stigma thanks to the Rocky franchise (save the first ending against expectations in a way that made it near impossible to be a copycat by shunning the “happily ever after”). They all feel familiar and this one’s no different. You can guess what’s going to happen the instant you sit down. And since the plot hinges on only one legitimate surprise (revealed early on in the marketing, no less), the whole lives and dies by its emotionality.

To this end I’m in its corner. Fuqua, late composer James Horner, and actors have doubled down on the melodrama so that the audience must choke back a sob at least once. Whether the documentary-style handheld depiction of Mo in Billy’s shaking arms as blood and tears mix or the tough moments of his broken father desperate for daughter Leila’s (Oona Laurence) embrace only to receive silent frustration instead, the mounting tragedy ensures their surname “Hope” makes good on its inclusion as an unsubtle promise for what’s forthcoming. Hope becomes all Billy has left and even it is quickly fading with each step away from the life he fought so hard to build. And if it wasn’t enough to lose his wife, his identity gets stripped via a suspended boxing license and his daughter taken by Child Protective Services. No matter how effective the performances are at pulling off this avalanche of pain, it risks being too much. I’ve yet to decide if that’s definitely the case or if the runtime is simply too short for everything to gel. The familial drama’s great and the boxing works too. There are only two extended fight sequences—one at the start with a ferocious Hope reveling in the blood dripping down his face and the battle foreshadowed seconds later that finally occurs at the end—but they are brutally authentic. We even get a training montage in between to parallel Billy’s numerous attempts at curbing his anger to win back custody of Leila from the court. Sadly, both halves are stuck competing for our attention.

What unfolded gradually at the beginning soon turns into a rapid-fire progression of plot necessities. Fuqua thrives at setting the stage for Billy and Mo: two foster kids who grew-up in the system and vowed to never let their daughter do the same. She’s the brain and he’s the brawn with an entourage of friends from way back and an agent who’d sell anyone’s soul to the devil for a big payday (Curtis ’50 Cent’ Jackson). The couple’s shorthand is detailed in its subtlety and you believe their characters beyond any A-list celebrity package. Billy’s spiral after her death is painfully sad and Laurence holds her own opposite Gyllenhaal’s powerhouse turn. While he’s mumbling and smirking in response to orders from authority he disagrees with, she’s embittered with rage to smack him awake from his pride. After that wake-up call, though, everything feels rushed and incomplete. Naomie Harris‘ social worker enters and evolves into someone who might have been a love interest in a former draft of the script and still retains a sympathetic disposition to introduce a spark that never comes. Forest Whitaker‘s memorable supporting role as trainer Tick Wills enters with his own hang-ups that aren’t fully elaborated upon despite eventually being ignored so a fight that comes together overnight between Hope and Miguel Escobar (Miguel Gomez) can happen. Another character dies, discipline is learned at the flip of a switch, and growth is produced without truly being earned. We forgive a lot of it initially because we’re so used to the trajectory, but if you look closer you’ll begin to see the stress fractures of jumping the story ahead too early.

While this might be enough to negate the positives for some, nothing’s necessarily unique about Sutter’s tale, even if the action does jump off the screen. I often found myself invigorated by the training and the fighting and grabbed by its emotional core. Gyllenhaal and Whitaker nearly transcend cliché even when forced to eat it and directly spit it back out without warning. We see Billy lamenting his fall in a tiny apartment alone and suddenly he’s spun off a few uppercuts for a chance at redemption. I’m not saying Southpaw needed to be three hours long, but it does make one wonder if a lot of footage found itself on the cutting room floor for a tighter runtime at the detriment of a realistic journey from points A to B.