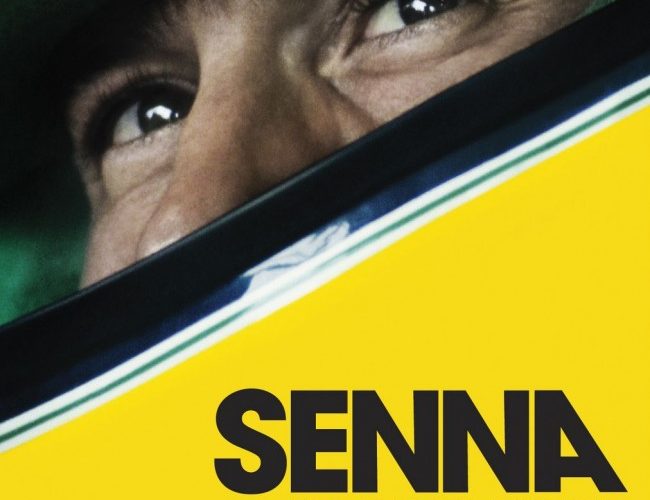 Senna, the riveting new documentary chronicling the career of Formula One phenom Ayrton Senna, is at once daring and obvious. It does not rely on the recountances of talking heads to explain to you what Senna meant, taking you by the hand like a child in a museum as capable adults point at the pretty pictures and explain why they’re important. No, the film allows us to understand and appreciate its subject by recreating what makes sport so enjoyable in the first place: first-hand experience. We watch sports with the promise that, at any moment, we can bare witness to the profound, the extraordinary, the impossible. Watching Ayrton Senna become a legend is no less compelling, even if you’re a Formula 1 novice (note: “Schumacher” is not German for “a cobbler”).

We meet Senna in this film the same way the international driving community did. He leaves his native Brazil and enters an international Kart event, a young man’s precursor to a professional life on the race track. This allows for people who have never heard of him (such as myself) to follow his career step-by-step in the same way that Formula One fans experienced it during his reign from the mid-1980s through the early 1990s in an exciting, truncated fashion. For the veterans, they’ll be delighted to relive some of the greatest hits: his introduction at the ’84 Monaco GP, dominating the ’85 Portugese Grand Prix (seemingly unaware that rain is supposed to slow cars down), and the multiple showdowns at the Japan Grand Prix that would decide the eventual World Champion.

The entire film utilizes nothing but archival footage, keeping the viewer constantly invested in the story as it unfolds without any outside interference. Director Asif Kapadia, a self-described “visual director” lets the video that he’s culled from gold mines like the official Formula 1 vault to the lowly 240p depths of YouTube show the story as occasional current-day interviews with important players in his life give details and context in voice over. It uses a mix of family videos, off-track interviews, and captivating pre-race matches to fully realize the man in the car. But those always feel like footnotes, a bit of background. His life was on the racetrack. What else would a biographical documentary focus on? Going hand-in-hand with the unconventional narrative style, this film has a number of conflicts to keep things both interesting and realistic. It feels like the real-life sports movie that King Of Kong is based on, featuring bitter a rivalry marred by organizational corruption.  Senna was a pure driver, instinctual, bordering on reckless, who was too narrowly focused on winning each match to care about the overall standings. Standing in direct opposition was his foil, Alain Prost, a slick, measured, cerebral Frenchman imminently able to finish a race in 5th if that would help him in overall points. They were small-time adversaries–Senna the upstart, Prost the established king–until they became teammates at McLaren, one of the preeminent racing teams in the world. Once on the same side, they morphed into bitter enemies, letting all of their talking happen on the track.

But their battles were not always decided by the racing stripe. Formula 1 is a nebulous organization; apparently to learn the points system designed to declare its world champion at the end is best studied with a mathematics degree under your arm. This allows for shady dealings, something that its president,  Jean-Maire Balestre, knew all too well. Balestre, the epitome of the smug, self-satisfied Frenchman stereotype, lived by a simple code: everything he decides (regardless of fairness or sanity) is the decision that should be made. One particularly egregious finish shows Senna winning a race but losing on a technicality. It is of no coincidence that Prost and Balestre were seen conferring in a press box above the track for minutes before the committee came down with the ruling. The racing media studied Senna’s apparent error like it was the Zapruder film and found nothing to it, but the mark stayed the same. His issues with Balestre don’t revolve solely around racing but the conditions that they were racing under. This is the first time that computer technology enters into the pure racing world of Formula 1 (these guys aren’t just racing in one big oval; note the “swimming pool)” radically altering the playing field. Pure racers like Senna couldn’t keep up with the technological advances in super cars that allow for better traction and grip automatically, taking out a lot of the skill in the sport.  Formula 1 reacted by taking out all electronics. It evened out the playing field but made many of the drivers at risk, as safety devices were thrown out with the rest of the technological bath water. This, coupled with tracks that were built for cars not built to safely confine cars of these speeds, left Senna to use his power to stand up to the establishment in something more important than victory: safety. But if his words fall on deaf ears, then what will it take to enact change?

Although Senna was a proud son (and revered hero) of Brazil, he is a perfect American hero. Mixed with the winning demeanor of Michael Jordan, the philanthropy of Magic Johnson, and the faith of Kurt Warner, he is a figure that should be revered by audiences. That shouldn’t be too hard, as this film paints its protagonist as an unfailing saint. For a picture whose pace keeps up with the race cars that zoom through its frames there seemingly isn’t enough time to give him a “warts and all” look, which hurts the film a bit. The only darkness comes from a sinking feeling of dread that hangs over the film throughout which has more to do with circumstance than character. No matter. Senna is an exciting, vibrant, and accessible film that you’d love to take more laps with when the credits begin to roll.