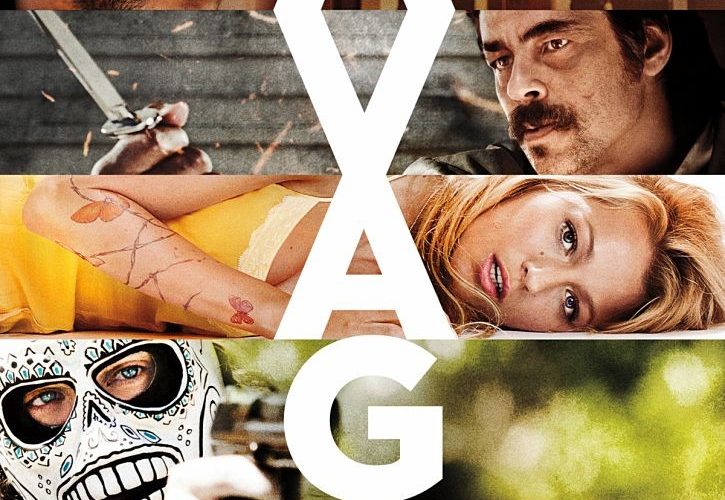 Who’s crueler: a vicious Mexican cartel who decapitate men to send a message, or a couple of Laguna boys trying — and willing to do whatever it takes — to protect the emotionally-damaged girlfriend they share? Being a trick question, the answer is yes. Humanity has, plain and simple, been plagued by the capacity for evil since the dawn of time, whether its exemplified by a monkey discovering the blunt force trauma capability of a stick or Eve biting that gosh darned apple in Paradise. We yearn for a rush of adrenaline, the sense of pride inherent in besting an adversary, and the ability to truly possess power in a world overrun by a lazy, good-for-nothing hoard of moochers and opportunists. And if Oliver Stone‘s aptly named Savages has anything to say about it, we all have our breaking point — no matter how much of a pacifist, eco-friendly idealist you are. With Don Winslow has adapted his own novel alongside Shane Salerno and Stone, the film marks a return to the darkly comic/brutally violent fare that litters the lattermost’s critically-acclaimed career. But, unlike the over-the-top insanity of Natural Born Killers or U-Turn, Savages wants to affix itself firmly into a media blitz reality of drug-runners and young entrepreneurs misjudging an ability to coexist alongside them. With murder, kidnapping, and trafficking occurring at a rapid pace, it is the yin-and-yang partnership of Navy Seal Chon (Taylor Kitsch) and third world savior/botanist Ben (Aaron Johnson) that unwittingly lodges itself into the action. Assumed to be a couple of hot-shot growers providing the Californian public with a quality of marijuana the cartel can only hope to achieve, the lengths they’ll go to survive turns a hostile takeover into a firefight.

Our introduction to the tale becomes its worst misstep. In opening on the love of Chon and Ben’s lives, Ophelia (Blake Lively), we hear her overwrought dialogue juxtaposed over a history lesson of background details. If there’s one person you don’t want narrating your film, it’s Lively; though unquestionably gorgeous, only her trainwreck Southie from The Town has possessed a semblance of talent to go with her looks. And, as a pawn of a character, O shouldn’t be more than the impetus for our antiheroes’ turn to the dark side. Willing to live out her life in Laguna with her credit cards as she hangs off a bad boy and good guy simultaneously, she is merely bait. Why, then, must we hear her monotone thoughts throughout the film? Why do we need a conduit at all, let alone one feigning mystery with a clumsy note of, “Just because I’m telling the story doesn’t mean I’m alive at the end”?

It’s the weakest role of the bunch, and we waste too much of a bloated 127-minute runtime watching her in captivity when nothing she does — or, nothing she has done to her — has any bearing on the plot, besides the fact she’s not underneath one of her men. In fact, her relationship with Chon and Ben is inconsequential after we discover the deep-seeded love they share. A simple revenge flick at the end of the day, Savages would be better off not showing O until the opportunity for saving her arrives. Leave the audience in the dark and let us get wrapped up in the search. Let us feel the helpless desire etched on Johnson and Kitsch’s faces not knowing whether she’s alive, tortured, dead, or basking in an impromptu vacation at a five-star resort. This is a guerilla war between American cowboys and Mexican heathens. Show us the carnage. Thankfully, Stone doesn’t have a problem with violence, and lets the blood flow. Led by the ruthless Elena (Salma Hayek), the cartel seeking out Chon and Ben’s lucrative strain does not fool around. They send the more business-like Alex (Demián Bichir) and Jaime (Antonio Jaramillo) as the face of the “corporation,” but it isn’t long before muscle arrives in the form a mustache-stroking psychopath named Lado (Benicio Del Toro). Being the man unleashed to menace, maim, and send his boss’ messy messages, this role provides Del Toro with a showcase return to the big screen after having only The Wolfman under his belt in light of 2008’s epic Che. Sarcastically vile in his interactions, Lado is a force as he burns a trail through California, clearing the way to remove rival El Azul. Devoid of allegiances as long as he gets paid, it’s over-the-top villainy at its finest.

Such a cartoonish portrayal sets the tone for how depraved these characters become. A sequence pitting Del Toro and John Travolta‘s DEA Agent Dennis against each other is glorious scenery chewing, with the latter actor adding some nice humorous banter despite limited screentime. But as Lado strips away all semblance of humanity to uncover the monster within, we experience Chon and Ben’s own need to fall from their idyllic world of optimism to match his intensity. Kitsch gives his best work in a welcome-to-Hollywood-stardom year, playing the bulldog Ben’s sensitive intellectual lets loose once yielding a compassionate response from their associates fails. When the stakes amplify and O is taken, Chon must take control. Needing Ben to forgo his sunny disposition towards mankind, we watch as the nothing-left-to-lose mentality in Kitsch’s eyes quickly rubs off.

Along with dispensing entertainment in a blood-soaked aesthetic, Stone also does his best to overcome the script’s limitations. Trying to let the violence counteract heavy-handed dialogue by seeing hardened criminals beg for their lives and families is still laughable; I understand a want for authenticity in showing horrible savages with human feelings, but it’s a cliché already underlying the whole. Johnson’s Ben earns the right to play both ways because he’s introduced as someone who naively thinks mankind can be saved—his transformation at the hand of evil therefore proving Winslow’s point by itself. The rest becomes unnecessary fluff clouding the darkly comic romp of fantastically amoral cretins surrounding it. Throw in the terribly contrived ending that turns an ill-fated attempt at being smart and cool into the biggest cop-out imaginable, and the film’s full potential is sadly never reached.

Savages is now in wide release.