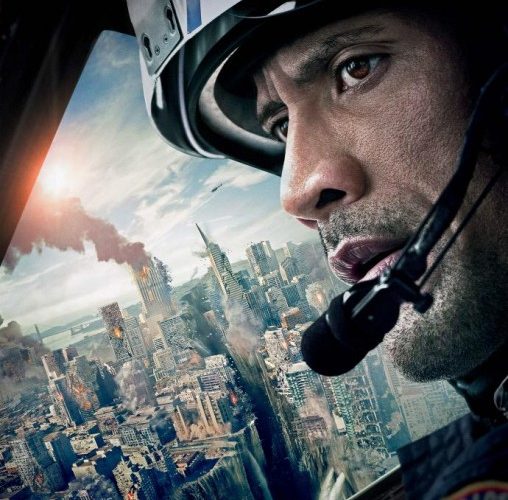 Can you call a movie a disaster flick without the President of the United States declaring a state of emergency? While I ask in jest, we do expect such a sobering announcement to arrive with music soaring and heroic platitudes raining down. It never comes here, though, and its absence might be the best thing about San Andreas, since it means the chaos inflicted on poor unsuspecting pixels pretending to be Californian cities doesn’t spread internationally. The shockwaves of this cataclysmic event surely go farther than the West Coast, but director Brad Peyton and writer Carlton Cuse never waste our time finding out. They remain centered on the titular fault, place all emotional and physical heavy lifting onto the shoulders of one family, and hope we don’t realize what ten minutes without oxygen does to the human brain. I can forgive a lot of things, but prolonging someone’s potential death for that long when a Hollywood ending and manipulative score pretty much guarantee the Grim Reaper is nowhere in sight isn’t one of them. Luckily for Warner Brothers, I’m not this movie’s target audience. No, that would be the crowd of hundreds I sat down with who couldn’t stop laughing and gasping throughout. A group of people so willing to embrace the escapism of watching millions of faceless extras die that they audibly cheered when the selfish prick pushing strangers in front of a barreling cars — all to claw an inch further away from an oncoming tsunami — dies. Yes, San Andreas is that kind of blockbuster: one culling together every cliché the genre has ever utilized before to show how the American flag never falters.

This means we get the dismissed scientist trying to warn everyone that they’re going to die (Paul Giamatti‘s Lawrence); the foreign tourists who picked the absolute worst time to come stateside (Hugo Johnstone-Burt as Ben and Art Parkinson as his brother Ollie); and the in-shambles nuclear family of soon-to-be-divorced parents (Dwayne Johnson‘s Ray and Carla Gugino‘s Emma) and daughter Blake (Alexandra Daddario). Whoever came up with the idea that the apocalypse is just what a struggling marriage needs to stick together must have more money than Scrooge McDuck thanks to these films, and couples therapists could take notes for success. It won’t be easy, obviously, but it’s doable when you’re a 6’4″ mountain of muscle who’s already a superhero firefighter-rescue pilot. So there’s definitely hope for the rest of us.

While I said earlier that staying at ground zero was a welcome maneuver, refusing to move away from Ray’s clan isn’t. Let’s just say he would have needed to sell his soul to the Devil to earn the luck necessary for the opportunity to find his loved ones and also potentially do so while they’re still breathing. Because I won’t pull punches — people are dying in every corner of every frame except for Ray’s loved ones. They get hurt, but after twenty minutes they seemingly forget due to spikes in adrenaline and contrivances of plot. Or maybe they stay alive simply because engineers can think on their feet to lift heavy objects off humans and all daughters of firemen know how to use rotary phones in a blackout. (Was there more to this than plugging it in?)

Or maybe it’s the cathartic power of forgiving one’s self as the world crumbles that gives them the strength to hold on, give God the middle finger, and dive into elaborate set-pieces that make New York City’s devastation in The Avengers pale in comparison. Kudos to the effects teams, because their depiction of these quakes is a memorable feat. And I say that without snark since, besides the rolling cities earning a chuckle, everything else is believably rendered with awe. Peyton and cinematographer Steve Yedlin join the fun, too, with an awesome faux single-take as the building Gugino is inside with new boyfriend Daniel’s (Ioan Gruffudd) ex-wife (Kylie Minogue‘s waspy Susan) falls apart. Not only does she seamlessly move through a mass of screaming casualties; every door she opens also shows nothing but skyline behind it.

Sadly, this scene — and a harrowing one at the Hoover Dam — occur at the start to ultimately ensure what follows can never match their exhilaration. Watching The Rock make constipated face while attempting to power a speedboat over a massive wave before cresting is hardly suspenseful. The least these filmmakers could have done was add cannon fodder to both Ray’s and Blake’s groups as they try to converge in San Francisco. At one point, the camera shifts from Ray and Emma to Blake, Ben, and Ollie to Giamatti at Cal Tech to the weasel we rejoice in watching die. That’s five leads Hollywood would be hard-pressed to abandon, a scientist too far from the fault to be badly hurt, and a man we love to hate. Once the latter is gone there are literally no stakes left.

And that’s San Andreas‘ downfall: there’s no mystery to how it plays out. While focusing on one family keeps it from sprawling so far that every plot thread becomes paper thin, it also removes any sense of suspense. Either they all live or die — neither option possesses the nuance for us to care. The computer graphics are fantastic, Johnson gets more than a few cheeky one-liners, and there’s enough sentiment and lovey-dovey eyes shared between the saved and savior to force someone with an ironclad constitution to puke. After all, watching the most qualified first-responder in America completely ignore directives to personally rescue his ex-wife and daughter four hundred miles away from each other isn’t a heartwarming display of love. It’s an unintentionally comedic look at mankind’s selfish disinterest toward anyone in danger — except for family.

San Andreas opens on Friday, May 29.