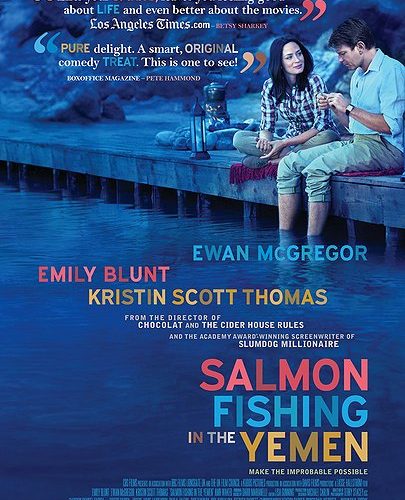 [Review] Salmon Fishing in the Yemen

I’d be remiss if I didn’t explain the two most pressing points about Salmon Fishing in the Yemen right up front. Yes, they do get salmon in the Yemen, and of course our charming leads Ewan McGregor and Emily Blunt get together. I don’t think that’s a spoiler as much as a romantic comedy stable. Romcoms are always about the journey, not the destination and this is one journey that is absolutely worth taking.

The foundation of the plot comes at the whims of two very important and extremely powerful people. One is a rich Yemeni Sheikh (Amr Waked) who wants to bring his favorite Scottish past time, salmon fishing, to his homeland in order to foster good will and cooperation amongst its fractured populace. Never mind the fact that his homeland is relatively baron of all things that scream out “this is a good place to fish.” The other is Patricia Maxwell (Kristen Scott Thomas), the press secretary for the Prime Minister of Britain during the early aughts, seemingly plucked from In The Loop and placed amongst slightly fishier waters. In one of those fun bits of confluence, Ms. Maxwell would like to distract the public from the latest accidental bombing of an Afghani mosque and this quirky tale seems to be just the thing (we don’t learn what they do to cover the next accidental mosque bombing; I’d guess Kuwait gets snowboarding).

Fred Jones (Ewan McGregor) works for the Ministry of Fisheries, which is about as exciting as it sounds. Hamstrung in a marriage of convenience, he diligently attends his job, looking forward to that day’s usual sandwich and, if he’s really lucky, a session of intercourse-by-the-numbers with his equally as staid partner Mary (Rachael Stirling). He confuses choosing an insect-based cover for a fishing report to crack that hip “YouTube” demographic as a highlight of his day rather than a cry for help. Poor Fred.

One day, he receives an email from Harriet Chetwode-Talbot (Emily Blunt), the young, effervescent financial adviser to the Sheikh who attempts to make the rich man’s audacious dreams a reality. Her pleasant and easygoing nature clashes with his nature, which is so buttoned up he must have trouble breathing; the fact that the plan is damn near impossible doesn’t exactly endear Fred to the project either. Fred finds the entire idea preposterous, perplexing, and damn near unfeasible…until an executive order urges him to make it a reality (or sign his resignation).

Harriet carries a small bit of baggage. She became involved in a whirlwind three week romance with a British Army captain who is dispatched to Afghanistan just as they start clicking. This weighs on Harriet, in a mixture of guilt and worry, multiplied by the fact that this is the first man this woman who looks like Emily Blunt has been with in quite some time (movie magic!).

One of the connecting threads in this film is the importance of faith. Not from the audience, as we’re in good hands, but from the characters. Fred is a man of science, whose insistence on “If, Then” thinking slowly gives way to the Sheikh’s almost willful belief that will all come together, plausibility be damned. Will Fred give in to this thinking and overcome the project’s myriad problems, his soul-sucking marriage, and allow him to prove that sometimes the fishing rod is mightier than the sword? And what of Harriet and her army man, let alone her possible growing feelings for Fred?

This write-up, much like the film’s underwhelming trailer, might not give the impression of the world’s most entertaining  evening out. What I will certainly give a disservice to is just how bright, quick-witted, and fun this film is. Simon Beaufoy (Slumdog Millionaire, 127 Hours) does a wonderful job turning Paul Torday’s well-regarded novel of the same name into a film that makes you care not just about the characters but the project itself. It’s the same kind of Hollywood magic that touched Slumdog — can these people pull off the impossible, and can we care as it goes along? It is pulled together through the guiding hands of Lasse Hallström (My Life as a Dog, Chocolat) obviously well versed in romance and underdog stories. He doesn’t get in the way of the fantastic chemistry on display from Blunt and McGregor, letting them be as charming as humanly possible as they slowly affect one another until we’re practically screaming for them to get together already (though the conflict that delays the inevitable is rather formidable, indeed).

What separates this film from many others of its ilk is the care that is given to every character. Kirsten Scott Thomas’ character chews up every small scene she is in, acting like a Greek God who sets the plot in motion and tends to drop in at all the wrong times just to muck it up, to our delight. Special attention should be paid to McGregor’s boss, Tom Mison as Robert, who is given the material and time to take a somewhat thankless middle-management role and make it a pivotal part of the film’s overall charm. He is truly the only good part of entering that drab, grey slab of a building the ministry works at, even if it comes to the chagrin of our man Fred.

This is a smart, adult romantic comedy that puts the emphasis on characters who act like real, rational people would in strained relationships set against a quixotic mission to bring fishing to the desert. While blunt, hit-you-over-the-head fair like Project X dominates the theaters, it’s nice to know that some wit and class will be tucked away in the back of your local mega-plex.

Salmon Fishing in the Yemen is now in limited release.