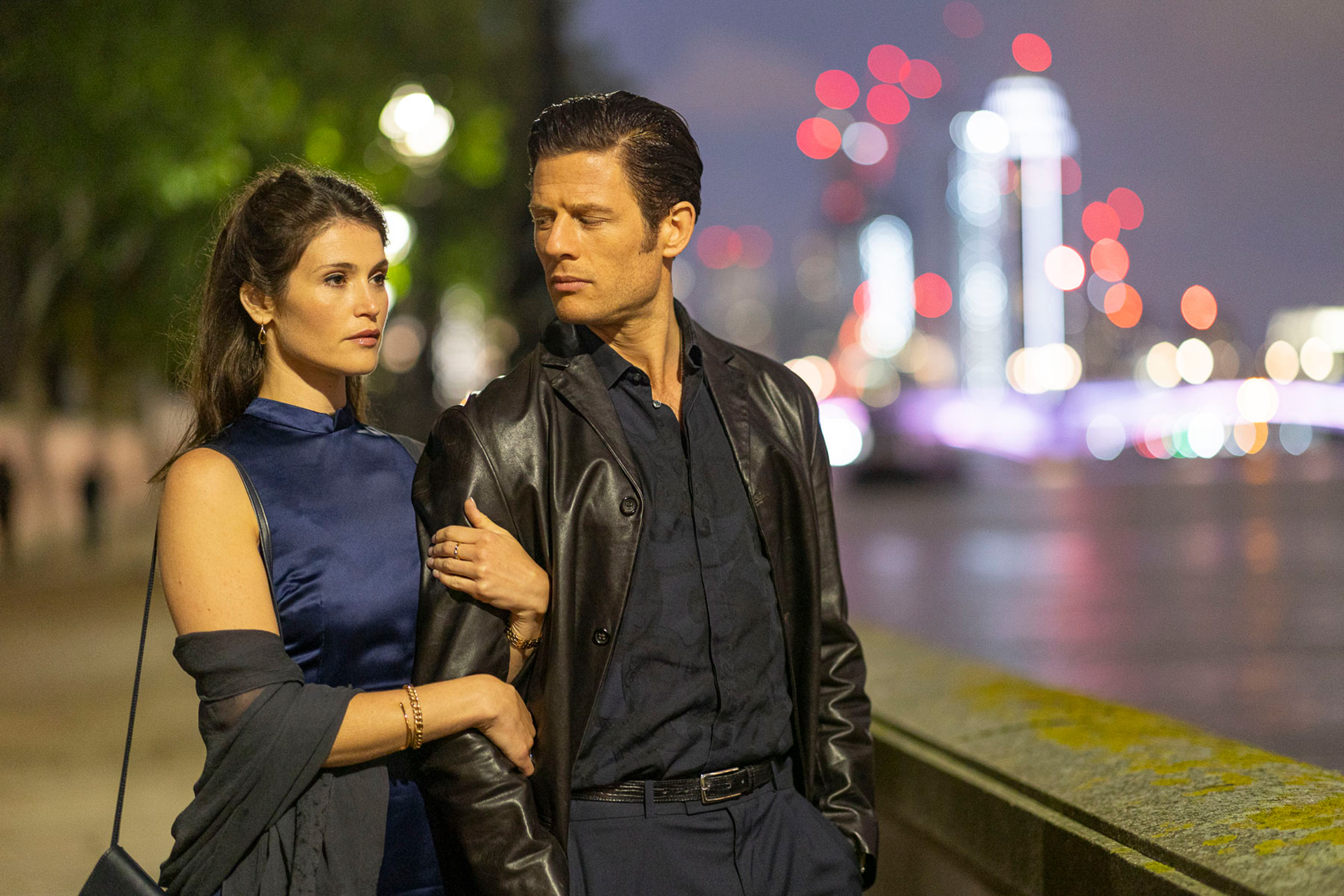 I’m surprised the studio gives up the game in its marketing materials; Declan Lawn and Adam Patterson’s Rogue Agent is built in such a way that allows the ruse to stand as truth until a midway-point revelation. It’s a case where not watching a trailer probably augmented my enjoyment of the piece—I genuinely didn’t know where things were going or who to believe. Was Robert Freegard (James Norton) really an MI5 agent who fell in love and thus must suffer the agency’s cruel vetting process of throwing dirt to see if his lover will remain loyal? Or was he a conman shrewdly covering his tracks to keep Alice Archer (Gemma Arterton) on her heels before stealing her money? It really could’ve gone either way.

Watch the trailer, though, and it’s a con from the start. Thus I wonder if the film’s first half feels as invigorating to someone who already knows as it did for me. It might, conversely, get frustrating: despite wanting to get to the meat of the story, you’re forced to endure an hour of deception instead. By going in blind I became seduced by Freegard just as effectively as his victims—falling for his charm and lies as he weaved a web of deception to stay one or two steps ahead. If Alice begins to seem withdrawn, he concocts a story to explain away her fears. It’s not like he hasn’t done this before. How can he turn always being found out into an advantage?

That’s a real hook here. Right from the beginning, when he recruits three college students to help infiltrate an IRA cell (Marisa Abela’s Sophie, Freya Mavor’s Mae, and Philip Wright’s Jeremy), he’s playing a long con that both alienates them from their rural-based families and seduces them into believing they’re on a path towards espionage and adventure. Freegard operated for twelve years, duping women into giving him their money while holding some as assets long-term to help him commit subsequent crimes. The damage he wrought is impressive. It’s what got journalist Michael Bronner to pursue the case and write the unpublished article that would ultimately become this script. But he, Lawn, and Patterson still needed a hero to humanize what was a nightmare for Freegard’s victims.

Enter Alice. While based on one of Freegard’s real marks, looking up details on the true story seems to reveal that’s all she was. The idea to make her more—to make her an adversary and let her suffering ignite a tense cat-and-mouse chase—is pure cinematic embellishment. And it works, flipping what would have been a glorification of the antagonist’s actions (due to him getting away with it for so long) into a journey of self-empowerment. Alice becomes the only person willing to stake everything on bringing this man to justice. Others stay under his spell, the authorities are handcuffed to the reality that Freegard is smart enough to twist his coercions into complicity, and Alice refuses to let him keep going. Who blinks first?

By separating this film into two parts we really get to understand how alluring Freegard was. He always says the right things. He’s an expert manipulator who pushes prey into scenarios they willingly embrace, doing it (with Lawn and Patterson shooting) in a way that tells us he’s someone we can trust. I was absolutely riveted for that first hour, constantly trying to decipher the lies. And without knowing it’s all lies going in, it’s easy to buy what he’s selling. Add the fact that Alice is “too capable” to let someone trick her in this way and the simple explanation somehow becomes absurd. Freegard being a spy becomes more believable than him being a sociopath—we forget nobody’s immune from being betrayed.

So after an hour of watching Alice be systematically pushed into a corner under the pretense of freedom, we experience her do the same to Freeland. If the second half may not be as tight as the first, it’s no less intriguing with evidence that was initially ignored reaching her hands to be filtered through someone’s mind that can’t just laugh it away as a “learning experience” when it comes to youthful naïveté. Alice isn’t a teenager. She wasn’t sold a bill of goods for adventure. She had her autonomy stolen and is positioned to ensure no one else goes through the psychological trauma of reconciling that fact again. Because there are still girls missing. Mae and Sophie still believe Freegard’s lies. And there are more to come.

It’s the latter bit where Rogue Agent hits a snag. It might be a product of my knowing the truth at that point—those who’ve watched the trailer to know the truth before sitting down might not feel the same—but Freegard’s seduction of Jenny (Sarah Goldberg) initially plays like she sees through his façade. There’s a line where he pitches her on joining the agency only for her to say she’s on anti-depressants, knowing it would disqualify her. When he seems unperturbed, there’s a look on her face that says, “Red alert. He doesn’t actually know what he’s talking about.” Instead of pursuing that angle, however, things remain status quo. She falls under his spell like the others, continuing to leave his apprehension in Alice’s hands.

I found very little to fault beyond that single instance, though. The tonal shift once the curtain’s lifted is perfect, the suspense taut, and the acting great across the board. I liked Norton a lot, changing a consistent demeanor from charming to menacing after the context of who we think he is shifts to who he actually is. You want to give his Freegard the benefit of the doubt for so long that it’s easy to hate him upon realizing the truth. And that’s why Arterton’s turn is so compelling: her Alice feels the same. She pokes holes in his story only to have him patch them up; it’s nothing short of devastating to finally discover she was right all along. It’s a mistake she won’t make again.