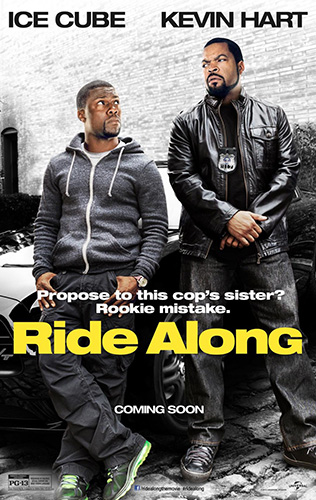 If you’re a fan of Kevin Hart, you’ll probably be satisfied with Ride Along, if only to enjoy the antics he’s saturated Hollywood with these past couple years. It’s a run-of-the-mill buddy cop comedy that hits every note in the formula book thanks to two sets of rewrites over a four-year gestation — but none of it truly matters when Hart is there to amp up the funny each time he opens his mouth and ceases to shut it. The Heat did exactly what this tries to accomplish better and smarter, but at the end of the day its success merely amounts to whether people will laugh at the dynamic between gamer Ben (Hart) and James (Ice Cube), the vice squad brother of his soon-to-be fiancé. The plot simply comes along for the ride—pun intended. You’d think when the theater lights go down that you’re about to witness the scene from the trailer when Ben and Angela (Tika Sumpter) come crashing into their dark apartment ready to strip each other’s clothes off only to find James waiting in the shadows with a flashlight, but you’d be wrong. Before this became a vehicle for Hart in 2012 (after his Think Like a Man director Tim Story came on board alongside action screenwriting duo Phil Hay and Matt Manfredi), the original 2009 treatment from Greg Coolidge had already been locked up at Ice Cube’s shingle Cube Vision. It’s no surprise then that the adventure begins with his badass undercover cop leading a sting operation with team members Santiago (John Leguizamo) and Miggs (Bryan Callen) to capture the elusive kingpin known as Omar.

It’s a welcome story thread, helping to give more weight than what pitting tough guy versus wannabe can provide for 100 minutes. Honestly, how long would it take before you get bored watching Ice Cube take a series of 126s (really annoying calls no officer wants) with the sole intention of mocking Hart until he quits his dream of being a cop and hopefully a member of their family too? That back and forth remains as the reason James lets Ben ride with him in the first place, but giving the former a real case so the latter can serendipitously stumble upon clues keeps us entertained in the process. Don’t get me wrong, though, watching Hart helplessly flail opposite a “bearded” biker chick and an eight-year old baller does earn its laughs. Knowing actor Jason Mantzoukas also came in for rewrites between Coolidge and Hay/Manfredi, however, can’t help conjure thoughts of too many cooks in the kitchen. A perfect example is an early scene where Ben’s high school security guard unorthodoxly talks a student out of skipping his English exam to run off and get drunk with friends. The exchange shows how his manic insanity can do good, setting the stage for what you assume will be similar instances on the streets with actual criminals. But we’re never told who this kid is or why Ben would help him while simply ignoring the handful of others obviously getting in their car to leave school early. It’s obviously a plot device meant for recurrence and yet it’s rendered into nothing more than a quick laugh forgotten ten seconds later.

While stuff like this shows Ride Along had potential to become an actual well-written film, it doesn’t detract from its mission to make audiences laugh. On this mark it resoundingly succeeds because the preview screening I attended was loud enough that you couldn’t hear the follow up lines to every big joke. That’s higher praise than anything a critic could say because in proves the goal was achieved. Universal knows it too, by already green-lighting a sequel before its release, confident in a box office victory and longevity courtesy of Hart’s enthusiastic one-liners and shrill shrieks when hitting the floor at the first sign of danger. He and Ice Cube are great polar opposites and pros at mocking each other whether about the former’s height or the latter’s stiff upper-lip delivery. A bunch of supporting players help, too, whether it’s Benjamin Flores Jr. jawing at Hart, Gary Owen lathering himself up with honey at a farmer’s market, or Laurence Fishburne arriving with an over-the-top air for villainy that chews the scenery to the bone. Watching Fishburne fight Hart is hilarious because you know the big man has to pick Kevin up and slam him down at some point. Sumpter unfortunately receives little to do besides being eye-candy or the damsel in distress, but, sadly, I’m not sure anyone would have expected differently. She’s the reason Ben and James refuse to quit because they will not let her be alone in this world. That’s the common denominator between them, but don’t go thinking James will ever admit it until Ben proves he has the mettle to protect her.

To say more would give away secrets I may already have by comparing it to The Heat, so I’ll just state that Ride Along will at the very least entertain despite any inherent contrivances. Whether Hart’s getting punked by Ice Cube, acting super tough when he isn’t, or actually finding the courage to enter a situation that should earn a bullet in the head as soon as he opens his mouth, the guy excels. I thought I’d be over his shtick by now—especially after Grudge Match—but he keeps surprising me by showing most obnoxiousness lies in the project rather than his ability to do what he does best. He has the talent to turn a mediocre genre re-hash into a prospective hit and he’s not squandering the opportunity.

Ride Along opens in wide release on Friday, January 17th.