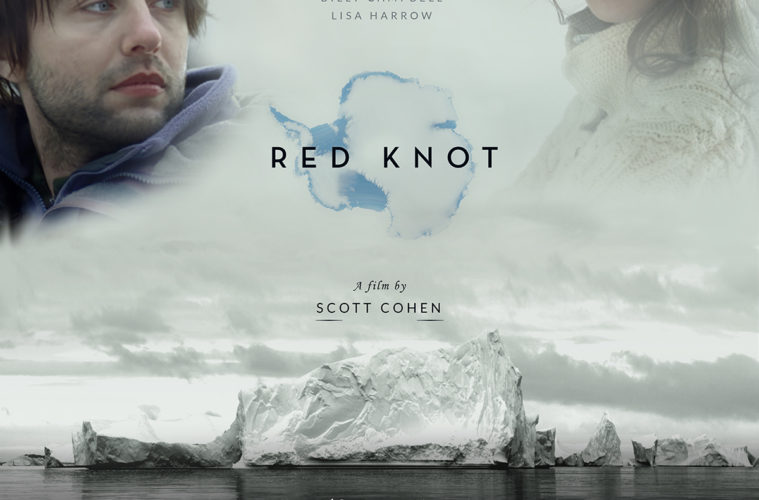 The claustrophobic nature of a boat threatens to tear a young couple’s marriage apart before it has even set sail in Scott Cohen’s quietly powerful Red Knot. Peter (Mad Men‘s Vincent Kartheiser) is a writer with an inclination towards Antarctic explorers who jumps at the chance to join the crew of an Antarctic research vessel and brings along his young wife Chloe (Olivia Thirlby) for the journey. In a way it serves as a honeymoon but it’s made clear that little romance can survive on such a trip in such tight, forced confines. Set against the gorgeous backdrop of the Antarctic Ocean and a real ship with actual researchers on board, the film explores love and connection with a natural drama due to the settings.

Indeed, it doesn’t take much to sell the concept of a rocky patch for the newlyweds and their inability to separate from each other once on board. Peter becomes so engrossed in his work, essentially rubbing shoulders with people he has grown to idolize, that he pays little attention to his wife who quickly realizes that she doesn’t hold the same draw for his attention while on the vessel. This isolation, despite their close proximity, is emphasized by the way the film is shot (courtesy of cinematographer Michael Simmons) with tight hallways, portholes, and the constant sight of ocean surrounding them. While Thirlby’s character, Chloe, doesn’t give much away, she draws one in. Her affection is earned, and for half of the film it seems that despite being married Peter has no clue how to connect with her and indeed, at times, doesn’t seem to even bother. He rolls out of bed early to catch up with the explorers on board and rarely finds time to spend with Chloe alone. His ideal time would be to have her bask in the same company, but Chloe doesn’t much care for that. Her whims are drawn elsewhere and as their relationship becomes more strained she is drawn to others on the ship, and specifically the rather reticent Captain Emerson (Billy Campbell).

While the arguments made are specific towards Chloe and Peter, the music intentionally blurs the words at the height of their shouts to give enough ambiguity that one can see their fights as something more general and relatable. There is a careful balance between the dramatic journey itself with the unending sway of the ship, captured remarkably by photographer and cinematographer turned first-time writer/director Scott Cohen. Red Knot is a spare film just over 80 minutes and yet it manages to quietly engage its topics with depth often lacking in films with much more room to expand.

Another draw is the way the scenery reflects nature in a way that few films capture. It is just a background and doesn’t care if you’re feeling claustrophobic or happy–it simply exists the way it is. There is utter beauty to be found, and the film never shies away from capturing the way the boat slices through the ice in the frozen ocean, the various treks onto land with seals and penguins, and the ever-present isolation, but it’s the performances that shine.

Thirlby has a tendency to shine in small roles and here she gets a chance to be the focus and doesn’t falter with a quiet presence played effectively. While Peter’s ideals seem to be misshapen and out of touch, Kartheiser still manages to imbue the role with enough of a human touch that one feels their relationship is something to root for. Red Knot isn’t satisfied with simply adding unnecessary drama, rather there’s a natural feel to Peter and Chloe’s issues that reach beyond the wondrous background of their journey. Cohen plays this to all of its strengths, and Red Knot manages to quickly pull one in without overstaying its welcome.