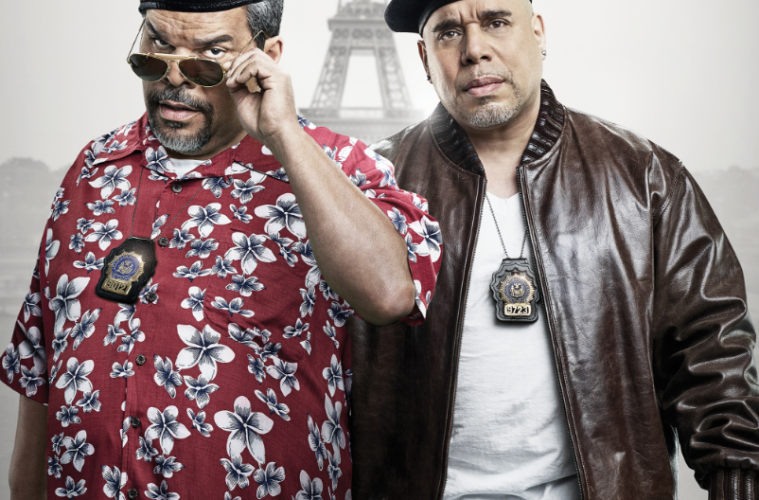 Somewhat likable if too silly for its own good, Puerto Ricans in Paris is the kind of film that might one day find itself adapted into a sitcom. Directed by Ian Edelman from a script co-written by Edelman and Neel Shah, the flick finds two NYPD detectives Luis (Luis Guzmán) and Eddie (Edgar Garcia) in Paris on the hunt for a stolen designer handbag. Experts at detecting Canal Street knock-offs, they’re retained by a sexy Paris designer Colette (Alice Tagloni) and her business partner Vincent (Frederic Anscombre) to chase down leads including a young apprentice, a publicist, and a broke model who recently and mysteriously just purchased a vineyard.

Both men come equipped with drama; Luis is a playboy whose been casually seeing Vanessa (Rosario Dawson) until she wants more while Eddie, a family man, is so financially stretched he’s unable to give Rosie Perez‘s Gloria, his wife and also Luis’ sister, a decent anniversary night out. There’s the set up and the film doesn’t quite deliver a great punch-line, although it has many a beat you’d expect with a few laughs along the way. Students of the buddy comedy will surely find the picture to be comfort food.

The most delightful thing about feature is Guzmán in his first leading role. He’s as funny as ever, even if the material doesn’t give him much to work with. Puerto Ricans in Paris is such a sitcom that it plays like one of those special episodes where the characters are taken out of the studio and let loose in the wild. A film seen in theaters probably shouldn’t recall the special two-part episode of Perfect Strangers that found Larry and Balki running for their life after accidentally taping a mob murder in LA, but this one is pretty much that.

Puerto Ricans in Paris finds Luis and Eddie in a string of improbable situations, right down to a fitting montage that doesn’t quite work to drinking gags as they insert themselves into Persian life after hours — it’s all quite trite. One early bartering scene which finds our guys dressed as Sheiks is downright culturally embarrassing for all (mostly the film’s audience) without much of a pay-off. I’m sure not even Jeff Franklin, creator of Full House, Bosom Buddies and Hanging With Mr. Cooper, would have signed off on a gag that dumb in the 1990s. Other gags and pay-offs inspire that “ah ha” moment, and one nice thing to be said for its script is it leaves no loose ends, an ideal exercise in narrative economy.

The grand takeaway from Puerto Ricans in Paris, which delivers what you’d expect and not much else, is that someone ought to finally give Luis Guzmán the leading role of a lifetime. The film, however, is tolerable on cable or free TV. It certainly isn’t the worst film you can check into for a few minutes, although that depends on which point you check in.

Puerto Ricans in Paris is now playing in select theaters and is available on VOD.