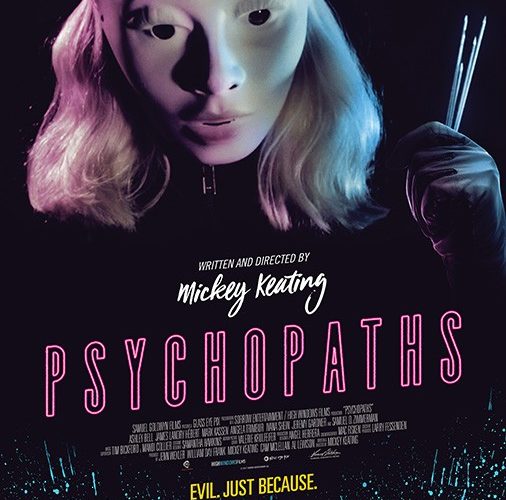 It’s hard to reject a film as having no substance when its narrator apologizes for that very fact. Was its hollowness therefore an intentional commentary on the empty nihilistic void that we call life or was the filmmaker throwing us for a “meta” loop with a tongue-in-cheek laugh that knowingly commends our having sat through it in its entirety nonetheless? In this vein Mickey Keating’s Psychopaths could be profound or worthless. It could be a full-fledged movie that seeks to entertain in its gratuity or a feature length experiment with kill shots and psychedelic filters to be used in subsequent projects containing a bit more meat on their bones. You can like it or hate it or — like me — appreciate the ride despite its lack of reward. I’m the latter because I must applaud Keating for making me believe something was coming, some purposeful “a-ha” moment transcending the foreboding premonitions of a mass murderer (Larry Fessenden’s Starkweather) awaiting the electric chair. I’d like to say I needed one to exist and yet here I am on the other side having watched it anyway without. That alone is a victory for the filmmaker and a testament to his handling of the horror genre’s imagery as demanding our attention. It shows how naïve we are as viewers and citizens of a world turned upside down since we still maintain that evil is wrought with an objective in mind rather than for the pure unadulterated fun it provides its facilitator. Why can’t homicidal maniacs simply enjoy their work?

For lack of a better plot description, I’d say Keating answers this question with an “are they or aren’t they” scenario that itself has no bearing on what we see as much as what we may like to suppose. Are the bringers of chaos wreaking havoc onscreen some form of successor to Starkweather either as children or disciples? Or are their actions a coincidental byproduct of his death being announced on the radio that activates their need to satiate their bloodlust simultaneously? (A third possibility is an Azazel type phenomena a la Fallen wherein the evil that was inside Starkweather now floats freely to possess others to do its bidding — a reading that the press notes give credence too despite my thinking it too lamely generic to accept.) So we listen to Starkweather cackle and spit his last words and try to wrap our heads around the prose of a disembodied storyteller (Jeff Daniel Phillips) spinning a yarn of carnage. The quartet of monsters then arrives in quick succession: The Strangler (James Landry Hébert) with his hands around a pretty woman’s neck, Alice’s (Ashley Bell) escaped mental patient with multiple personalities spanning 50s-era lounge singer to malevolent beast of impulse, Blondie’s (Angela Trimbur) emotionless torturer with a love of needles, and a mute contract killer known only as “Mask” (Sam Zimmerman). It’s Halloween homage with Jack the Ripper, Cuckoo for Cocoa Puffs, Torture Porn Maven, and the Lumbering Maniac who cannot die. Some battle unsuspecting victims. Some take on each other. All earn blood and screams.

Bell is over-the-top in the best way while Trimbur does affected calm and artificial flirtation like only a psychopath can. Hébert is hyperbolically fun if mostly an afterthought while Zimmerman embodies multiple immortal brute tropes with slow mechanical movements — effective yet boring since this type of character is supposed to be the antagonist rather than “lead.” They fight, maim, and kill while passing each other coincidentally with or without mutual engagement before fighting, maiming, and killing yet again. Sometimes a potentially worthy foil enters (Mark Kassen’s George or Jeremy Gardner’s memorable “Cop”), but they rarely get to be more than pawns in Keating’s sadistic game. Outsiders exist as prey rather than opposition and thus any hope for nuance or drama evaporates with another bullet or stab. Yet we watch, attempting to decipher the storyteller’s repetitious dialogue and the perpetual aural and visual loop of Starkweather. I didn’t get excited when one of these killers gets tripped up or when they sink a knife into the flesh of an unsuspecting victim (save one bona fide surprise). I just kept watching and waiting, waiting and watching until that aforementioned apology arrived. How you react is up to you because any reaction is probably okay in Keating’s book. He’s looking to provoke you into giving up because the violence proves too gratuitous or staying exactly where you in the hopes it’ll get even bloodier. Hating it assumes you like horror for more than its torture alone. Loving it means you may need psychological assistance.

While the whole thing meanders with no destination, I’m going to hold my position in the middle because it looks fantastic. If nothing else this exercise in nihilism has given Keating an excuse to throw everything at the wall and see what sticks. He plays with sideways angles and disorienting cuts from one unexpected vantage to another. He uses music as propulsion, nightmarish narcotics-induced abstraction for flair, and the ever-creepy (if over-used) masked anonymity and ambivalence of predators to gaze at shadowy black holes instead of human eyes. If Darling distilled the genre to its essence, Psychopaths collects everything he removed. The former was therefore a captivating journey in suspense while the latter loudly (intentionally?) provides horror detractors exactly what they’ve reductively dismissed all horror to be.