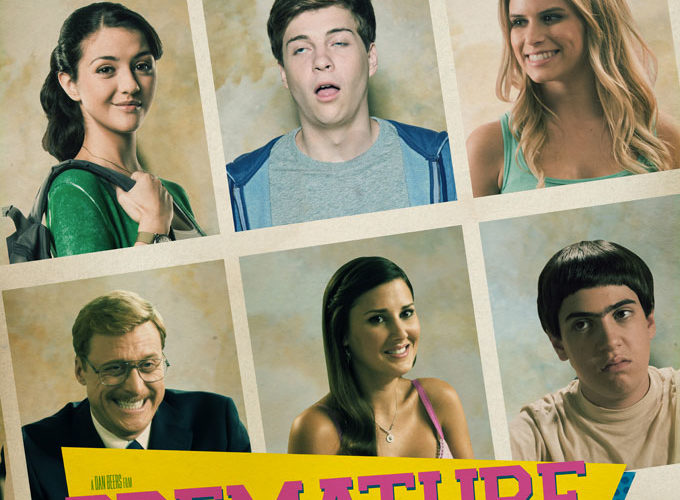 Enduring and funny, Premature, much like last year’s The To Do List, is a useful entry into that time test genre of the summer teen sex comedy. It’s a shame nowadays most of them find their audience not in the theater with a crowd, but on VOD. This is a perfect movie for a group of 15-year-old boys, but perhaps they will experience it alone, much like the sexual history of our hero Rob (John Karna). Treading ground we’ve seen before, Premature begins with somewhat low expectations. Young Rob wakes up covered in (his own) sperm and his mom tells him, “just put the sheets in the wash.” It’s a particularly stressful day as he meets up with his sidekick Stanley (Craig Roberts) and his pal Gabrielle (Katie Findlay), is hit with a Super Soaker full of urine by a volleyball team, heads to his entrance interview of Georgetown, and is seduced by Angela (Carlson Young), the sexy “school slut” whom he’s been tutoring. After blowing his load, it starts all over again, just like the comedy classic Groundhog Day. Sure, first-time writer/director Dan Beers steps wrong a few times; a sexual assault on a large-breasted teacher is one place where the film slid from enduring to creepy. Still, Premature has many redeeming qualities, including an important lesson that Rob learns: you should do what you want, not what other people want for you. This was perhaps the main lesson learned in She’s All That and John Hughes pictures before it, but Premature is not without refreshing nods to new paradigms in masculinity. Consider a strange bond between Alan Tudyk’s Georgetown Admissions Officer and Rob’s father Jim (Steve Coulter). At first the admissions officer seems like a joke, but the script is full of smart payoffs.

Comedy is highly subjective yet, like The To Do List, Premature worked for me. It’s funny with breaking only so much new ground, but it’s rooted in the here and now. The small-scale feature is smarter than its Hollywood counterparts, making fun of those that demonize the teen libido. Imperfect, yet energetic and complete with big laughs and heart, if you’re nostalgic for the American Pie flicks, Premature will do the trick.

Premature is now in limited release and on VOD.