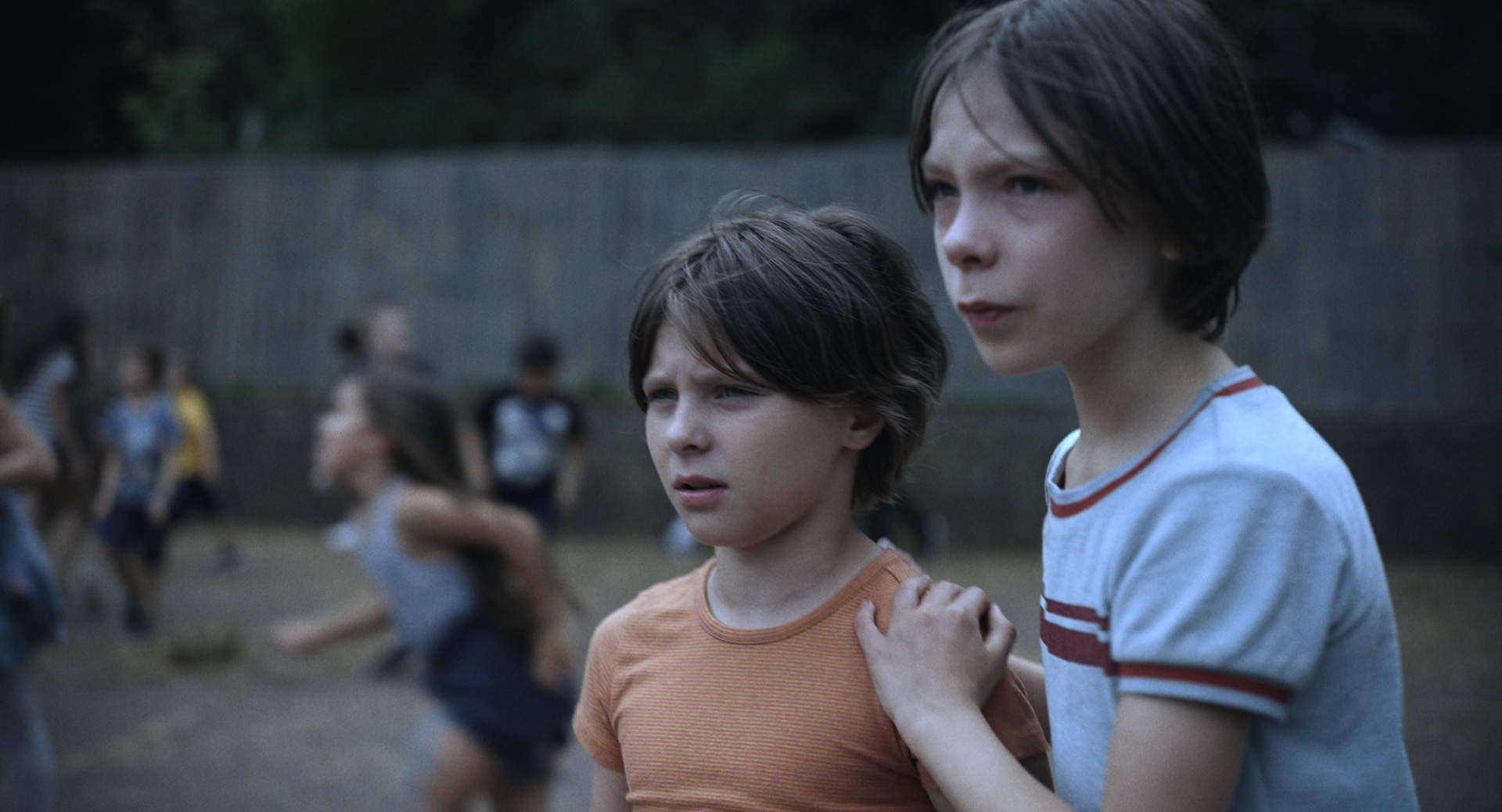 The camera never leaves young Nora (Maya Vanderbeque) throughout the entirety of Playground. Writer-director Laura Wandel needs us to follow her closely and understand the ups and downs of adolescence through eyes yet unversed in the unfortunate drama life has to offer. All this girl knows at the start is that she’s being left alone. Dad (Karim Leklou) isn’t allowed past the school gate, so his “goodbye” occurs well before the classroom door closes behind her. Older brother Abel (Günter Duret) has his own friends and teachers to deal with, the familiar hierarchy we’ve all experienced in our youth already known to him. So what’s Nora to do but wait for reunion? She bides time, says as little as possible, and rejoices at the recess bell.

Except things don’t get better. They will once she gets more acclimated, but right now life is only going to get worse. Why? Because her fear has nowhere to go, and neither Abel nor their father prepared her with the coping mechanisms necessary to fight it off and move forward. She’ll learn on the fly (like the majority of us did) and make friends at lunch and gym class with easy laughter and increased comfortability, but today Nora only sees alienation. She sees her brother as her solitary beacon of safety—the hero that will make everything better. Except he has his own role to play inside his own life too. He can’t simultaneously shield her from emotional duress and prove his toughness with the bullies his age.

If Abel isn’t in the dark corner of the playground beating up on the new kids, he risks being the one beat up. If you’re not the predator you become the prey. It doesn’t matter that he currently has the bullies’ ears, either—he’s only as good as his actions. Weakness is a liability, defiance an act of war. That’s what he ignites when the other boys push Nora into the fence. Abel tells them to let go and fights back when they don’t. By choosing to be her world’s hero he becomes his own’s pariah. And while the consequences might seem like his to bear alone, that’s not how the world works. Not inside a school. Everything that happens to Abel impacts Nora by association.

Thus it isn’t a coincidence that the handheld cinematography keeping Nora in frame evokes a gritty prison drama. Wandel has turned the playground into “the yard” with all its tense dynamics, ineffective guards (teachers), and constant escalation. You must do what you’re told and not divert from the path, but that path has numerous blind spots in which to wreak havoc anyway. That’s where the bullies exist. They’re emboldened by bystanders all too happy to cheer them on if it means they aren’t the ones being abused. They’re well-versed in the brevity of torture to ensure they’re far from the scene of the crime by the time an adult finally arrives to see what’s happening. And snitching only guarantees your suffering will intensify.

Wandel pulls no punches in her depiction, and both Leklou and Vanderbeque deliver performances well beyond their years. (A child’s ability to embark on roles this psychologically draining will never cease to amaze.) With only 70 minutes at its disposal, Playground pushes forward with powerful intent. Not a second can be wasted. Not a single glance can be unmoored from the bigger picture. That sacrifice above is thus the catalyst for Abel’s rapid descent into abuse from those who know him and those who don’t. And as he becomes persona non grata in the process, Nora is left with her own choice: be his hero and defend him, or save herself. Either remember his pain is because he chose her or fear it and betray him by choosing differently.

This decision dictates everything that follows. And it’s a lot. Nora is put through the wringer between disciplinary hearings, Dad being over-protective, Ms. Agnès (Laura Verlinden) being the one person Nora trusts (and the one person who won’t be there to help forever), and new challenges that would make anyone’s head explode—let alone a grade-schooler. What’s more important? Standing by Abel as her friends mock him or abandoning him to maintain the status their popularity grants her? How is Abel supposed to rehabilitate himself? Find new friends by championing those he terrorized as a means of self-preservation or become the biggest bully the school has ever seen en route to ruling with fear? Once you’re made to feel worthless, it’s not long before you believe it’s true.

So you cope via overcompensation. You find the greener pastures even if the price for entry is a little piece of your soul. Nora goes from a scared kid on the first day of school to an angry one acting out of that same fear because of that same abandonment. Can she process this truth? No. She takes the lesson learned (that trying to help only makes things worse) and does the opposite instead. The result? She becomes the abandoner. Where it leads is as harrowing an experience as you can imagine from this subject matter. The aftermath may not prove so dire that there’s no turning back, but the journey certainly allows for the authenticity necessary to believe it could easily get there if nothing changes fast.

There’s a ton of insight and hard realities, from Nora truly thinking “helping” is “meddling” to Ms. Agnès’ admission that adults make mistakes and miss opportunities to fix things because they simply don’t know what to do. The latter is of course what separates this playground from being a prison (arguing that prisons should actually be more like a playground is for another time). These aren’t guards maliciously looking the other way or cracking skulls for fun. The teachers and parents are just as fallible as the kids, wading through uncertain waters without knowing what’s best. More rage enflames. Too much forgiveness invites more pain. As the poster shows, sometimes the simplest answer is a hug. Only love and belonging can heal our collective hurt.

Playground opens in limited release and via virtual cinemas on February 11.