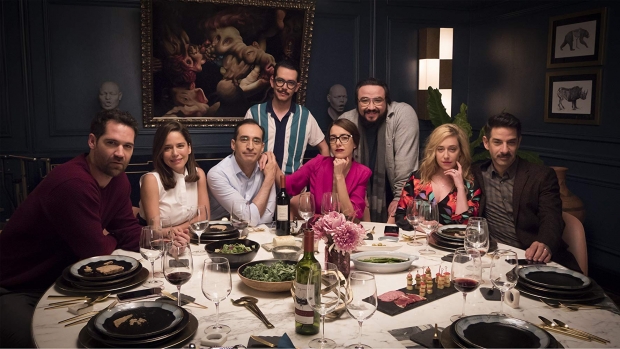 If the movies have taught us something is that nothing good ever comes from dinner parties. So when the seven friends in Manolo Caro’s Perfect Strangers get together for an evening of food and drinks, one can’t help but squirm a bit in preparation of what’s to come. That feeling of “something’s coming and it won’t be good” is validated when the hostess Eva (a flawless Cecilia Suárez), who also happens to be a psychologist, proposes they play a game: in order to avoid being rude to each other during dinner while checking their phones, they will all just lay their phones on the table and make the texts, social media notifications, and calls they receive, a part of the conversation.

Except for Eva’s husband Alonso (Bruno Bichir), most of them decide to play and the night goes from the stuff of romantic comedies to what psychological horror films are made of. With each beep, ring and vibration, a new layer is uncovered, revealing that these seven people who thought they knew each other so well, are practically strangers. Intermarital affairs come to the surface, tensions between parents and children are revealed, and one of the friends is forced out of the closet after a thankless text.

Perfect Strangers is an adaptation of the eponymous 2016 Italian film by Paolo Genovese, which has a concept so original that there have been movie versions of it made in France, Turkey, Spain, South Korea, India, Hungary, and now Mexico. In Israel the script was turned into a play, and one has to wonder if it was conceived as an escape room theatrical experience, because the premise instantly inspires claustrophobia.

Yet it’s in this feeling of entrapment precisely where the screenplay’s brilliance lies. None of the friends are bound physically or legally to be a part of this game they know will destroy their relationships, and yet they take part in it without hesitation, as if the drama that ensues from the revelations is the only interesting thing they have going on in their lives, and the only thing they might have in common with each other.

Caro, who has proved to be an expert at capturing the inner lives of the Mexican upper middle class (his Netflix soap opera House of Flowers is an Almodóvar-esque delight), delivers a potent essay of the way in which the more connected we think we are, the less open we tend to be. “It used to be ‘how are you’ when someone called you,” remembers Pepe (Franky Martín), “but now it’s ‘where are you’” he continues, pointing out the sense of entitlement and faux urgency that smartphones and social media have brought on.

The film by no means is against technology or modern communications though. It’s not exclusively about the cons of uninterrupted connectivity, or about demonizing modern times. In fact, Caro relishes in the dramatic possibilities that smartphones bring to the table. They become show and tell devices that resemble magic lanterns, conversations on speakerphone become radioplays, some of the texts are as witty and saucy as anything Flaubert could’ve imagined. If nothing else, Perfect Strangers is a film about how limited we are in the way in which we use technology. Rather than using it as a tool to advance our ways of storytelling and means of unique self-expression, we’re allowing its pettiest aspects to tell us who we are, becoming strangers to ourselves.

Perfect Strangers is now in theaters.