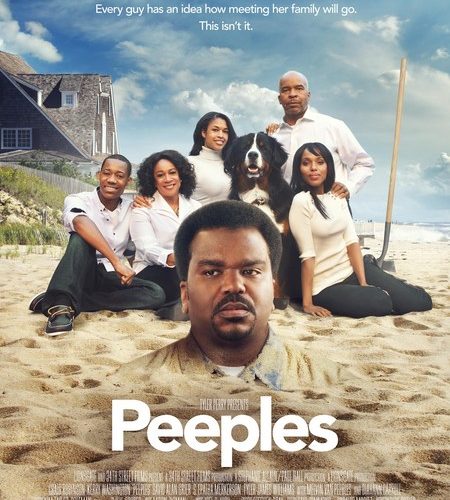 Here, finally, is a movie that would actually benefit from dropping the ‘Tyler Perry Presents’ tag that inevitably accompanies it.

Nothing against Perry, who has established a viable niche with his sometimes broad and obvious comedy adventures, but his name represents a specific brand and as long as the money keeps coming there’s no real incentive to change things up. Meet Peeples, destined to charm the built-in base, but also the first of the stable to break out into something that might be considered mainstream appeal. The movie knows it’s aiming at the date-night crowd and at an audience who Hollywood has traditionally ignored, and it’s not ashamed of either fact. Screenwriter Tina Gordon Chism takes directing duties on Peeples, and although she’s working a predictable riff on the Meet the Parents formula, she manages the actors and the big gags with a confidence that occasionally invigorates the material. Chism’s biggest ally in this endeavor is the cuddly-yet-caustic Craig Robinson, who carved out a presence in The Office ensemble as warehouse worker Daryl and has been haunting the edges of Apatow fare for the better part of a decade. Eventually Robinson was going to get a showcase role, and as Wade, a children’s songwriter who must win-over the stern federal judge father (David Alan Grier) of his girlfriend Grace (Kerry Washington) he’s an unlikely but winning fit. Good-natured, likable, and looking almost perpetually stoned, Robinson spices up Peeples by playing surrogate for all the reluctant males in the audience. Wade is the kind of guy that would inwardly wince while shelling out 20-plus bucks for this kind of thing, but smile warmly to his girl because he knows it’s all part of the job description. Like his Office co-star Steve Carell, Robinson is adept at droll silliness, but also has an affable down-to-earth quality that attempts to steady Peeples in the same way Carrell brought real human feeling to Dan in Real Life.

Unfortunately, Peeples isn’t remotely in the same category as that film, and if Chism manages to turn most of the Perry-isms on their head—Washington’s Grace is the strong black woman that Wade’s man needs for support instead of the other way around—she’s still stuck with the basic structure which requires some dopey, low-brow humor and an unnecessarily long-winded build-up of family secrets, culminating in the usual resolutions and big family catharsis. The problem is this family deserves better. Grier, sometimes an underrated comedian and sometimes a hammy blow-hard, chooses the right tone and commits to it; Papa Peeple is not a contrived grump, but an expectedly discerning and disapproving dad whose hold on his family has grown into something suffocating without his awareness. S. Epatha Merkerson as Grier’s wife, and Tyler James Williams and Kali Hawk as his children are all carrying their own secrets and insecurities—so, too is Grier—and this gives Robinson’s Wade something to work with, even when it’s backfiring. For instance, Hawk’s journalist takes a shine to Robinson and stands in his corner, but she’s also too timid to acknowledge the thing everyone else in the town already knows; the friend who accompanies her to every public function is obviously her lesbian lover. Williams looks up to Wade, himself something of a ballad-crafter, although his signature ditty is called “Drawers on the Floor” and might be referencing his father’s infidelity. These sorts of secrets feel contrived, mostly because Chism isn’t as interested in tying them dramatically to the way this family operates and exchanges love. When Melvin Van Peebles shows up as Grier’s own father, sizing up Wade with an award-winning scowl, Chism does find a way to make us believe this demanding family unit as a real scenario. If only the actors could play off of these generational shifts more; the movie would be more consistently funny and it might have discovered the heart that now eludes it.

Peeples may have a reliable cast, but it’s mostly the Craig Robinson show, and that’s really quite a good thing. After running through nude beaches and demented mushroom dream trips, Chism arrives at the problematic ‘Moby Dick Day’ set piece that requires Wade to suffer just a little more humiliation. Robinson takes it like a champ and the director takes his gentle, accommodating spirit to heart. Upon arriving at the eventual lessons and reconciliations it’s easy to care about whether Robinson, Grier and Washington will come to an understanding, and more importantly, value one another as family. By the last frame, that title makes more sense too; the titular characters in Peeples avoid overheated stereotypes and have become distinctive individuals who we wouldn’t mind spending more time with, provided they chuck the routine plot next time.

Peeples is now in wide release.