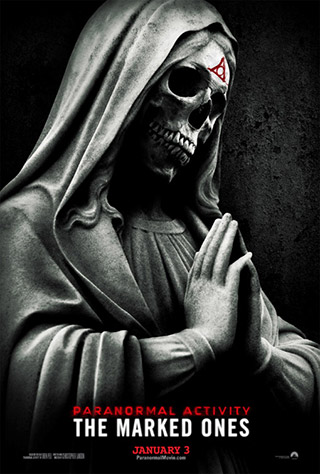 [Review] Paranormal Activity: The Marked Ones

There may indeed be something strange and out-of the-ordinary going on with Paranormal Activity: The Marked Ones, but that oddness isn’t confined to onscreen events. This is the fifth installment of a series that ran out of steam one whole film ago, it’s released three days into the new year at the very peak of the January movie dump, the primary advertising technique is that it’s the “Latino” take on the franchise, and against all odds…it’s good. Good enough, anyway.

When the first Paranormal Activity landed, it was assumed that the found footage technique of a gimmicky faux reality was what brought audiences in. As the series continued, the appeal was revealed to be something else altogether. The typical horror audience, one far broader in racial demographic than the casts of these movies would suggest, had a new set of marks to observe; clueless, spiritually devoid, yuppie WASPS were menaced by dark forces they neither understood nor could control, reduced to cowering victims in the sanctity of their well established, cushy homes.

That dynamic had interesting explorations in the first film—until the whining of Micah and Katie became unbearable—and even more so in the third picture, where the ethnic diversity expanded ever so slightly to adopt the larger spiritual implications of the attacks. Eventually, though, the series revealed itself to be a slightly cannier version of the Saw films, playing out fish in-a-barrel antics while touting continuity with an anemic, brittle backbone running through each outing. By the end of the fourth film, that enigmatic force known as Tobey had been ousted as an apathetic, Hittite slacker—a demon that would rather lounge on the couch playing Xbox Connect, letting a bunch of frail old ladies do his dirty work, than muster much of anything that could be called ‘activity’, paranormal or otherwise. Mercifully, the calculated decision to dislodge the saga momentarily from its posh setting—the official PA 5 is still on its way—and dump it into the middle of gang-occupied Oxnard, LA pays off nicely, giving audiences the best entry in the series thus far. At first, I was simply relieved that we wouldn’t have to see long, extended takes of the in-ground pool filter chugging away for hours, but in truth, the adjusted setting has a wealth of positive changes to tout.

Christopher Landon takes over as director, and restores the visual styling to something more traditionally hand-held and ultimately more freeing and geographically illuminating; one of the guys is holding a camera and documenting the trouble first-hand without the aid of oscillating fan cams or state-of-the-art security paraphernalia. Not obvious initially, this technique actually restores the concept of character viewpoint and dislodges the feeling that we, the audience, are simply outside observers to supernatural carnage.

Structure, isolation, and disconnect were the calling cards of the first four movies, suggesting that blind spiritual oblivion was the price to pay for living comfy in the white suburbs. Here we rove along with newcomer Andrew Jacobsen as Jesse, a fresh high school grad who’s part of a loving if superstitious family. There’s an interesting spiritual cross-pollination in Jesse’s community that is, for one of the first times in a horror film, presented with genuine curiosity. Traditional Catholicism and mysticism walk hand in hand and when an elderly woman in their apartment complex turns up dead, Jesse and his friend Hector learn she was suspected of being a witch. When Jesse ends up with a bite mark on his arm, he’s thrust into an escalating series of events that move away from the domestic haunting angle and resemble good old fashioned possession, complete with a few super-hero antics along the way. The strength of the film is in its straight-forward structure and well-drawn characters that we actually feel for and worry about when the crazy starts hitting the fan. The film doesn’t exist in a vacuum either, but intersects in nutty ways with the other Paranormal Activity movies.

The scares are effective and unsettling, and work better because they depend less on the Where’s Waldo? compositions of the other sequels and more on character dynamics. The Marked Ones is still mostly an excuse for carnival funhouse antics, but it’s a solid addition to a floundering series and infuses horror routine with a rather fresh perspective. The film’s positioning in the winter wasteland of January may even carve a new niche for low-budget horror shenanigans in much the way Peli’s original camped out in October’s Halloween timeslot. Until then, here’s a fun, spooky detour for audiences looking for their first theater experience of the year.

Paranormal Activity: The Marked Ones is now playing in wide release.