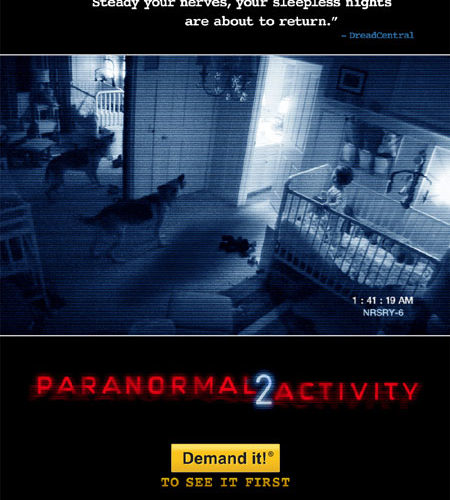 Following up last year’s hugely successful underdog film Paranormal Activity was surely no easy task.  As soon as I heard they were pumping out a sequel to the original I instantly cringed.  Given how PA was an underground cult hit that quickly blew up to amazing box office numbers, that similar track would be hard to replicate.

It happens many MANY times in the horror genre.  You happen upon a new interesting idea that unexpectedly gives you a hit, bringing in the cash and earning the film a classic status among horror fans, but is quickly ruined by a fast tracked, poorly put together sequel.  Paranormal Activity 2 does for the original what Halloween 2 did for the original Halloween. With Paranormal Activity 2, we’re given a smartly thought out story that intertwines with the original and surpasses it.  If the first gave you goosebumps, the second will definitely bring them back.

The film starts before the first film takes place, introducing us to a family (husband, wife, young daughter, and infant) who are moving into a new home.  Shortly after moving in, we realize that the wife is none other than the sister from the original (Katie) who pops in sporadically throughout the film.  After a series of strange occurrences and an ominous feeling from the nanny, the family installs security cameras throughout the interior and exterior of the house.  The rest of the film is what the cameras capture and how the family reacts after watching it.  The footage takes through the original events and then proceeds further.

The director Tod Williams did a superb job setting framing the shots and playing to the viewer’s instincts.  Just as you look one direction, something unexpected comes at you from another.  While I did enjoy this film for what it did in contrast to the original, the ending was a bit expected and uneventful.  I wish they had given us more towards the end and really pushed the boundaries.  With a film where anything could possibly happen, they fell a little short of stretching our imaginations towards the end.

In an era where box office milkers such as the Saw franchise and horror remakes dominate yet fail to impress, it’s hard to imagine that a big studio who stumbled upon an unknown hit could replicate that feeling for it’s bigger budget sequel.  With Paranormal Activity 2 they’ve managed to do just that.

What did you think of Paranormal Activity 2? Would you like to see another installment in the franchise?