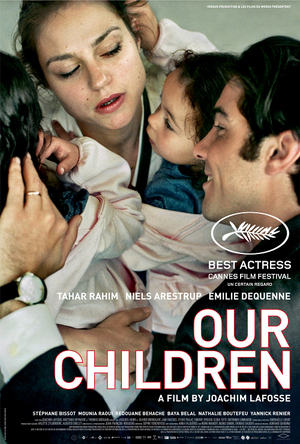 Belgian writer-director Joachim Lafosse, in dramatizing the horrific real-life story of Genevieve Lhermitte, makes a profoundly important decision by beginning his film Our Children with a glimpse at the narrative’s harrowing conclusion. The movie opens in a hospital room, where a teary-eyed Murielle (Émilie Dequenne) is strewn across a bed; she keeps repeating the phrase, “You’ll bury them in Morocco.” We then see two gloomy-looking men embrace in the nearby hallway, their demeanors further suggesting tragedy. And then, in the opening sequence’s pivotal image, we get the full picture: a long shot of four coffins being carted onto a plane. Add in some of the other subtleties (like, for instance, the title), and the specific circumstances of these introductory minutes become punishingly clear.

In a brave (though hardly novel) gesture, Lafosse immediately flashbacks to a close-up of a younger, happier Murielle, caught up in a passionate bit of lovemaking. Her partner: Mounir (Tahar Rahim), one of the men we got a short look at in the prologue. Lafosse doesn’t waste any time establishing their love, but it’s not a problem: a scene that consists of nothing but the two of them smiling at each other in a car is surely one of the most delightfully economical ways imaginable to push a pair of characters into marriage. Before taking that step, however, they must receive the blessing of Mounir’s longtime father figure, André Pinget (Niels Arestrup), a doctor. A revealing scene, seemingly a throwaway moment, has Mounir asking Murielle to help him clean out his car before picking up André; this nicely implies his ever-active subservience to the intimidating guardian.

Though basic exposition is rarely a characteristic worth praising in the movies, Our Children is often at its most fascinating when it’s simply charting the backstory of the central family. Mounir, a Moroccan immigrant, is not André’s biological son, but he’s been living under his roof for twenty years. Additionally, André has aided other members of Mounir’s family: the doctor is, in fact, married to Mounir’s sister, though the relationship was sanctioned solely to give the woman the right to procure residency papers. Another intriguing piece of information involves a scene in which Mounir’s brother, unmarried and wary of deportation, chastises Mounir for always having been André’s favorite surrogate son. These scenes complicate André’s charitable behavior: when he offers to let Mounir and Murielle move in with him after they get married, Lafosse and Arestrup allow the doctor’s motivations to remain unsettlingly muddled.

If Our Children is initially democratic in its balancing of character development—at first dividing the weight equally among André, Mounir, and Murielle—it’s when the couple begins having children that Lafosse’s focus zeroes in on Murielle. The first baby, a girl, is greeted like a blessing, and she seems a welcome, warm addition to the apartment. But as the infants continue to grow in number—another girl, then a third girl, and then the son that Mounir so craves—it begins to feel like the air is being sucked out of the home. The number of cribs, along with the escalating bundles of toys, destroys any sense of free space the apartment once had. Murielle’s only potential for cathartic isolation is communicated, hauntingly, in a shot that has her standing alone in the laundry room, the whirl of the washer protecting her from the domestic responsibilities lurking in the next room.

Dequenne, over a decade removed from her appearance in the Dardenne brothers’ Rosetta, seamlessly integrates this claustrophobia into her performance. The movie is overflowing with rigorous interiors—even the scenes that aren’t set inside the apartment are mostly restricted to the confined space of a car—and Dequenne expertly embodies this collapsing of breathing room, as if each passing scene has her receding further into the corners of an empty room. To the credit of both the actress and the director, Our Children rarely resorts to conventional hysterics when expressing the character’s emotional destruction: save for one obvious scene in which Murielle explodes at one of her students, Dequenne channels an eerie stillness to project the dissolution of Murielle’s psychology.

Lafosse’s work with the film’s other actors is just as sharp. Rahim and Arestrup, reprising and riffing on their father-son dynamic in Jacques Audiard’s A Prophet, effectively develop a relationship that’s damaging in its mutual reliance: Mounir can’t fully love Murielle because of his inability to escape from André’s financial and paternal shadow, and André can’t always be the nice-guy godfather because of his need to resort to aggression to make sure Mounir will never leave him. This tangled, intricate web of familial relations, made only richer and more complex by the presence of Mounir’s Moroccan relatives, is some of the strongest stuff in Our Children.

However, this doesn’t negate the fact that Our Children’s narrative structure is problematic. In choosing to foreshadow the ending, Lafosse and co-writers Thomas Bidegain (Rust and Bone) and Matthieu Reynaert make an implicit promise that the subsequent film will explain what could possibly lead to such a cruel conclusion. But the execution comes up short: Lafosse’s direction flirts with the sublime in a show-stopping, single-take sequence of Dequenne breaking down to a song on the radio, but it’s too pedestrian elsewhere, relying on the actress to convince us of a trajectory that just isn’t warranted in the screenplay. And the decision end the film neatly, keeping the climactic events off-screen, only creates more deficiencies, signaling as it does a movie that wants to shock without ever doing the dirty work of confronting the action head-on. Our Children begins with implying an event, and then ends without showing it; in between, it fails to connect the dots with the necessary assurance or conviction. But a flawed showcase for a very fine trio of actors is certainly not time wasted.

Our Children is currently playing in limited release in New York City, and will begin screening in Los Angeles on August 9th. Click here for more information.