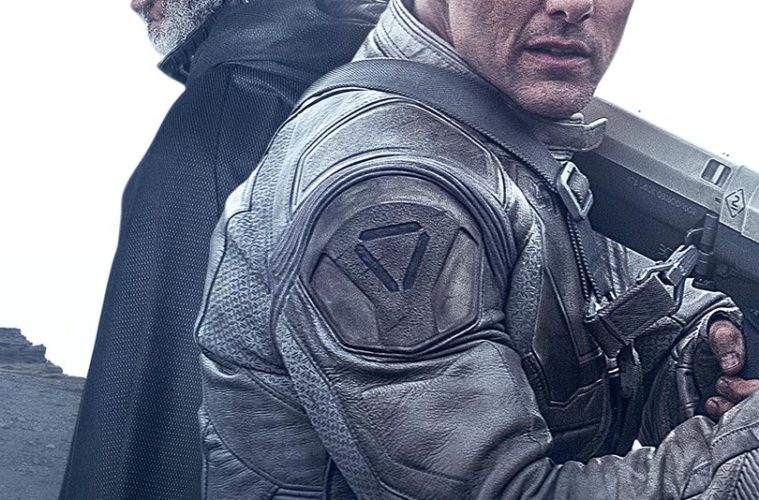 Joseph Kosinski‘s Oblivion opens with images of Jack Harper’s (Tom Cruise) memory: black-and-white glimpses of a meeting atop the Empire State Building, the handful of observing tourists doing little to distract us from the longing romantic heat between Jack and Julia (Olga Kurylenko). When Jack wakes up, he’s back in 2077, and the ensuing shots, coupled with a voice-over from Cruise, introduce us to an Earth torched to minimalist desolation by long-ago wars, nuclear explosions, and devastating tsunamis. Indeed, the futuristic playground crafted here is so bare you’d be forgiven for momentarily thinking that Oblivion is still working in a black-and-white pictorial format: the overriding tones are silvers and grays, deglamorizing the sleek polish of Kosinski’s sky-high sets with a sense of eerie lifelessness.

Though visually unique, these opening sequences are nervously heavy-handed in their presentation of Jack’s daily routine: the voice-over is an especially unwarranted intrusion, distracting from the potential mystery and obliqueness of the atmosphere. Unfortunately, this is perhaps a requisite requirement of any big-budget, semi-original-concept (the story’s adapted from Kosinski’s unpublished graphic novel) sci-fi flick these days: if the audience doesn’t know the world going in, the filmmakers can feel pressured into overcompensating with uninteresting exposition. But something like Andrew Stanton‘s WALL·E, an obvious point of comparison here, establishes its milieu with much more patience and restraint, and is a far more effective film for it.

Oblivion, meanwhile, runs into even more script-related hiccups when the dramatic dynamics are introduced: the working-relationship-with-benefits situation between Jack and Victoria (Andrea Riseborough) is quite unconvincing, so much so that one could argue that Jack has a deeper sexual rapport with his Elvis Presley bobble-head than he does with the strict, rule-abiding Victoria. That Jack, by contrast, is rather not rule-abiding provides a crutch in their relationship: when Victoria, from the home base, relays a message of advice to Jack out in the field, he usually does the complete opposite, making for some uncomfortable conversations when he comes home after escaping a near-capture situation. Further conflict is encroached when Jack discovers Julia, the very woman from his powerful visions, in the residue of an aircraft wreckage. The love-triangle tension that results, for the most part, is uninspired, and even awkward from a screenwriting standpoint: the language Jack uses to brief Julia when she wakes up is almost identical to that heard in the opening voice-over, raising the question as to why Cruise was elected to say this stuff at the beginning of the film in the first place. If he was always going to repeat the backstory to Julia, why unleash the information at the outset and strip the inaugural act of its riddles?

Thinking that its thematic ideas and narrative concepts are worthy of delay (which I’m not sure they are), Oblivion reveals little in its opening hour, using Jack’s troubled treks and flash-image memory as a means to build intrigue without giving away any concrete answers. The effect of this decision, honestly, is that the film is often just plain dull, with Cruise seeming neither exciting nor rebellious enough to excel above the material and lend the proceedings some personality. This is unlike last year’s Jack Reacher, which, despite its by-the-numbers plot mechanics, had a winning sense of humor, and an appealingly jokey performance from Cruise. Here, however, Cruise, as well as the rest of the cast, is so stunted under Kosinski’s stern direction that they rarely come off as anything more than robotic line-readers. Though possibly intentional, these rigid, straight-faced demeanors do little to make hidden the film’s storytelling holes: on the contrary, their blank-slate emoting usually has the opposite impact, negating our ability to engage with the characters’ motivations in a meaningful sense. Even the feisty Melissa Leo can’t escape these constraints: though she gives her assignment as Jack and Victoria’s commander a tart Southern accent, she’s relegated to a one-note role, a little icon on a screen.

Additionally, the narrative guardedness of the film’s first-hour chunks appears to hamper Kosinski in his staging of some of the early action sequences. In theory, the vagueness with which Oblivion operates here would be a mouth-watering opportunity for Kosinski, allowing him to focus on visceral concerns without feeling handcuffed by the story. But it’s precisely this latter feeling that comes through in the film: many of the scenes in which Cruise’s Jack explores this blown-to-dust Earth, interacting with floating drones and potential threats, almost play like half-scenes, building up the viewer’s involvement for a few minutes before cutting away, thereby saving the true reveals for later. This is exemplified in a recurring image of a masked creature, covered in an all-black cloak, tracking Jack’s movement. Each time Kosinski cuts to this figure, the shot only lasts for three or four seconds, giving us enough time to register the frightening spectacle, but not enough to do much more. Similarly, there are a handful of arresting moments where Jack experiences faulty communications with the drones that are supposed to be on his side: these tensions invite interpretations regarding the compelling mistrust-of-machinery theme, but Kosinski lets them conclude too easily, ending the scene just as the real tension is about to begin.

This would be less problematic if Oblivion‘s second hour proved to be a stronger capitalization of the introductory ideas, or even, at a more basic level, just more suspenseful and intense. As it stands, not only are the emotions undercooked — the history between Cruise and Kurylenko is as choreographed as it is flat, and Morgan Freeman, as a man with a plan named Malcolm Beech, is simply sleepwalking through the movie — but the onslaught of flashbacks inhibits the film’s forward momentum, keeping the pacing uneven and unsatisfying even when it’s designed to be at its peak level of activity. This inability to find the right balance between narrative control and visceral excitement is the most detrimental aspect of Oblivion, confining the film to a monotonous middle-ground in which neither the ideas nor the realization are confident enough to be considered successful.

As with 2010’s TRON: Legacy, Kosinski’s directorial debut, Oblivion presents Kosinski as an invested visual stylist: though I don’t think Oblivion is a very good film, it’s a much better one to look at than a lot of recent box-office kings (Evil Dead, Olympus Has Fallen, Oz the Great and Powerful). At the same time, though, there is something other than the writing that’s holding Kosinski’s work back: it’s that his images are more solitarily slick than they are cinematically engaged. In other words, the palette of Oblivion resembles a fashion-show highlight-reel, or an impressive home-decoration magazine, more than it does a cinematic text: there’s not enough of a concrete relationship between what we’re looking at and what is supposed to be communicated on the page. The film’s swimming-pool love scene is a good example: the combination of the pool’s glassy, eye-popping design and M83‘s (disappointing) score suggests a wow-factor moment, but it’s more unintentionally funny, too pretty and picture-perfect for the internal crisis it’s meant to be depicting. Much of Oblivion mimics this register: surface beauty with a relationship to narrative and theme that is tangential at best.