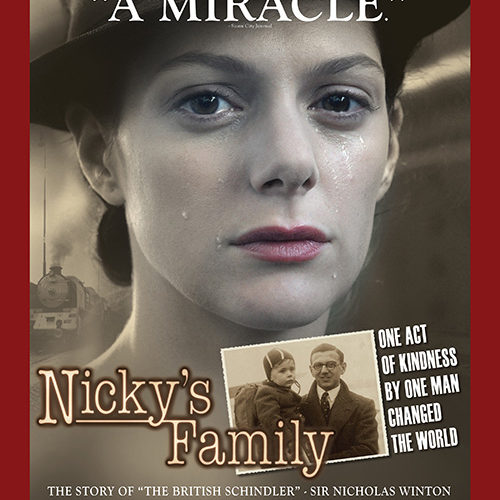 The title of Emmy Award winning team Matej Minac and Patrik Pass’ new documentary is probably its most telling attribute. Where many would have jumped at the chance to package this incredible tale as The Nicholas Winton Story, these two filmmakers made the very conscious decision to name it Nicky’s Family. While Nicholas Winton is the man who organized eight Kindertransports that saved a total of 669 Czech and Slovak children at the cusp of World War II, his actions were bigger than just himself. There’s no denying he is a hero, but one must also understand his position as a patriarch to a community presently spanning close to six thousand new branches of family tree that would have been wiped out by the Nazis if not for his intervention. Whether his assistants, institutional collaborators, those he saved, the parents who were courageous enough to let their children go, or the countless strangers inspired by his story, Winton’s reach is infinite. These children grew up in the care of English foster homes with some joining the fight to liberate their country and most returning there in earnest to discover what happened to those left behind. But for fifty years none knew who was responsible for putting them on that train from Prague to Holland and the subsequent boat to Liverpool before being dispersed to their respective new homes. Winton’s wife Grete wasn’t even aware her husband had played such an integral part in preventing so many from dying during the Holocaust until unearthing a scrapbook in their attic holding the unbelievable truth.

Narrated by Canadian TV journalist—and survivor—Joe Schlesinger, Nicky’s Family tells us the whole story through firsthand accounts from Winton, his surrogate children, and the offspring made possible by his actions. We receive a history lesson about the tensions in Czechoslovakia in 1939, the loss of the Sudetenland to Hitler, and the 29-year old British stockbroker who cancelled his ski trip to join friend Martin Blake help the refugees left adrift as a result. It was there he saw a map of Hitler’s plans to takeover Europe, met the thousands of families seeking his assistance to help remove their children from the powder keg about to erupt into war, and where this young man stood tall to tirelessly write requests all over the world until his own nation joined his cause by opening its borders. Known now as the “British Schindler”, Winton had the foresight to treat this exodus as a business. He cataloged each child and played salesman to families in England willing to serve as foster caretakers in order for the government to issue travel papers and passports. There will always be regret for those left behind—a ninth transport of 250 children had to be cancelled once the fighting began on September 1, 1939—but not even a man as modest as Nicky can deny the warmth and gratitude of those who made it through. He dealt with a Nazi spy, faked his involvement with the British government to create professional looking letterhead and be taken seriously, and ultimately stayed true to his word by continuing the work from England despite mounting hostilities in response to his correspondence with Prague.

But that’s only part of the tale when you consider the memory of the brave parents who let their flesh and blood go. One tale of a mother reaching back into one of the trains to retrieve her crying daughter—only to place her back in as it started moving with the gravity of the situation sinking in—will crush your soul. We hear tales of the happy times in Czechoslovakia, the fear of a journey without parental supervision that took them directly into the belly of the beast so as to escape, and the kind hearts of those who met them on the other side with open arms. It’s simply an amazing account spanning the entire emotional spectrum all told by those who lived it and not random historians pretending to know the facts. A mix of interviews, old photographs, archival footage, and reenactments of crucial moments with dodgy production value and a manipulative score, Minac and Pass’ film unfortunately can’t help project a PBS documentary vibe. In all honesty, I’m not sure this film would have received its limited theatrical run if not for the strength of its content and overall altruistic message. The information is all included with smooth transitions from old scrapbook photos to present-day counterparts complete with occupations and current home countries, classroom conversations around the world by many survivors, and video of a 2009 commemorative reunion train ride for Winton’s 100th birthday, but the end result simply isn’t all that cinematic. But while I’m obligated to make mention of this truth, I also can’t deny the story’s impact easily overcoming any aesthetic shortcomings.

Historical facts are shared through the permanent memories of children seventy years later with great intrigue, but the film’s real coup is providing a look at the moment where Winton and the survivors meet for the first time since their immigration. Watching the reaction shared on a 1988 episode of BBC’s That’s Life! can’t help but conjure tears as this elderly man who never in his dreams imagined the reach his actions would span understands whom it is sitting in the audience with him. This coupled with an update of the amazing things these kids—and theirs—grew to accomplish is so powerful and inspiring that you must look past the cheesy theatrical reenactments into the heart of human perseverance and unparalleled compassion on display. Nicky’s story is now accessible and for that the film is a grand success.

Nicky’s Family opens in limited release in NYC and LA on July 19th.