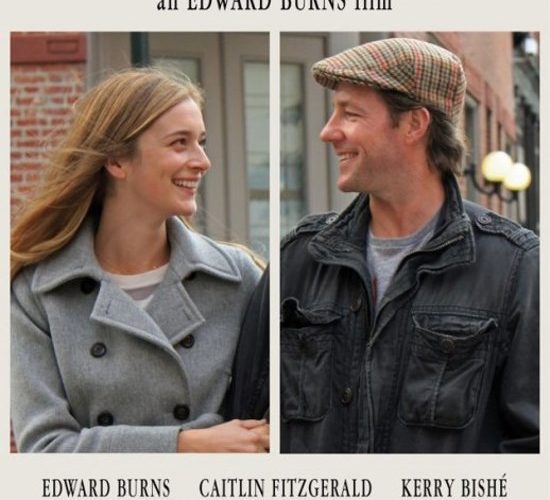 After having to watch Edward Burns‘ Newlyweds on my 14-inch MacBook, I immediately added all of the actor/writer/director’s previous films to the very top of my rental queue. Burns is a well-known actor, but, as a director, his films have small, niche audience; he’s a filmmaker not quite on my radar. Until now, thanks to his thoroughly enjoyable, smart and fun $9,000 indie dramedy.

This is about as small a film can get, and I don’t mean that in a condescending or dismissive way. Burns’ story is both well-contained and intimate. That’s not much of a surprise, since the character-driven film features only six main characters, with only two other side character to think of.

The main ensemble – the straight-laced Buzzy (Edward Burns), Buzzy’s erratic and obtrusive step-sister Linda (Kerry Bishé), Buzzy’s sweet and frustrated wife Katie (Caitlin Fitzgerald), and Max (memorable character actor Max Baker) and Marsha (Marsha Dietlein), the miserable 18-plus years married couple – could not be more different from one another. And yet they are all dealing with similar problems.

Buzzy and Katie are the lead couple who avoid serious intimacy and drama, believing that’s the “correct” way to go when it comes to marriage. Linda is not married, her only apparent priority – at first glance anyway –  to ruin another pair of newlywed’s marriage. As for the unhappy Max and Marsha, again, their 18-year long marriage Buzzy calls a success, proposing that if the two got divorced tomorrow, they could call it a win.

Burns shows how, no matter how long a relationship’s been in progress, you are always going to face new problems. In a way, one’s always a newlywed, having to face new obstacles. All the characters have probably dealt with the same issues, except for Linda’s, which is the storyline that’s the most problematic.

The issues Buzzy, Katie, Max and Marsha are dealing with are more understandable and the type one sees often, either to them or their friends. Plus, in all their scenes together, even minor elements are relatable: awkward dinners, passive aggressive conversation, etc.. That doesn’t work in Linda’s story, which causes slight pacing issues and ultimately holds the film back.

Newlyweds is now on VOD and hits limited theaters on January 13th, 2012.