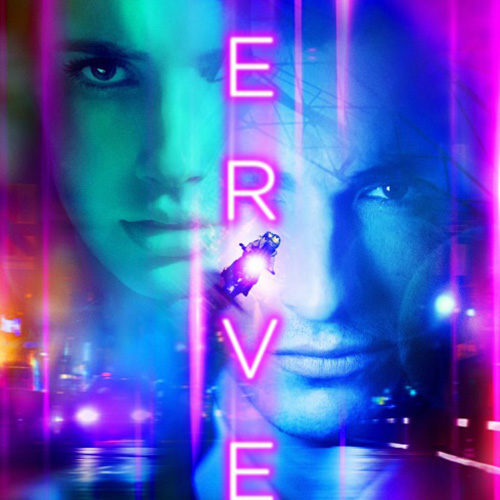 Perhaps the ideal thriller in a Pokémon Go era where Facebook Live, Periscope, and augmented reality have proven to be game-changers, Nerve ups the stakes and tension as the sport evolves and ultimately devolves into a Hunger Games-esque battle. The characters are just complex enough and the action is just engrossing enough to keep us interested, but Henry Joost and Ariel Schulman, working from Jeanne Ryan’s novel, haven’t quite built a solid-enough foundation to foster a genuinely compelling commentary on today’s social media obsession.

High school senior Venus aka “Vee” (Emma Roberts) is a shy, sometimes anti-social wallflower living in a social media age. Living on Staten Island in public housing with mom Nancy (Juliette Lewis) she’s on track to commute to a public college after her senior year while never getting close to the football jock she pines for. Her pal Sydney (Emily Mead) has become just as crazed with Nerve, a dark web application that breaks its participant into players and watchers. Vee is a habitual watcher, choosing usually to take the safe way out until she snaps and signs up as a Nerve player. Teaming up with pal Tommy (Miles Heizer) she kisses a stranger in a booth for $50. He just so happens to be Ian (Dave Franco), a Nerve pro who serves as a conduit into the high risk/high reward world of the game. Ian and Vee are dispatched from Staten Island to Manhattan and back several times over the course of the evening at a rate in which much of their earnings from the shadowy mesh-network of Nerve has surely been handed over to another evil enterprise: the Port Authority of New York and New Jersey in the form of a giant E-Z Pass toll bill.

A new take on an old game, filmmaker Drew Thomas beat the duo of Joost and Schulman to the screen with the similarly plotted Channeling, a sci-fi action film that had been on the festival circuit in 2013. Thomas’ film, with what appeared to be a smaller budget, is oddly more polished than Joost and Schulman’s film and that’s part of Nerve’s appeal: the first-person live-streams look credible and all the more scary as Sydney finds herself on a ladder walking between two high-rise public housing towers in a white-knuckle sequence that commanded the full attention of a theater of mostly teenagers — no easy feat when you’re competing against Snapchat.

Nerve gets a lot right capturing Vee rather authentically in a psychological portrait of high school life that’s slight, but provides a decent amount of gravity. Franco’s Ian also contains a certain amount of mystery; he’s good at the game as displayed when making a break from a high-end department store in his underwear to another effective sequence in which he’s dared to drive blindfolded down Park Avenue at 60 MPH. Consumers of local news in the New York City area will no doubt will be waiting for the inevitable Bill DeBlasio / Bill Bratton joint press conference denouncing Nerve as they watch. Where Nerve loses points is in its simplistic analysis of the game’s dangers — great media criticism or a warning shot this is not. Then again, neither was the duo’s pervious works Catfish and Paranormal Activity 3 and 4. Here, they stretch their muscles a little more, making a film that will no doubt have some resonance amongst social media’s heaviest consumers. Just don’t expect Network or even Nightcrawler.

The film is more interested in cyberbullying than media criticism, especially when rapper Machine Gun Kelly enters the picture as another pro-player named Ty. Thrilling within its PG-13 boundaries for obvious commercial reasons, that doesn’t mean its message could have been more sophisticated and complex considering how disappointingly it ties up its loose ends. Final cop-out aside, Nerve might evolve into one of those timely franchises like Saw and The Purge, which eventually explored timely subjects like health care reform and election year demagoguery while still selling plenty of popcorn.

Nerve is now in wide release.