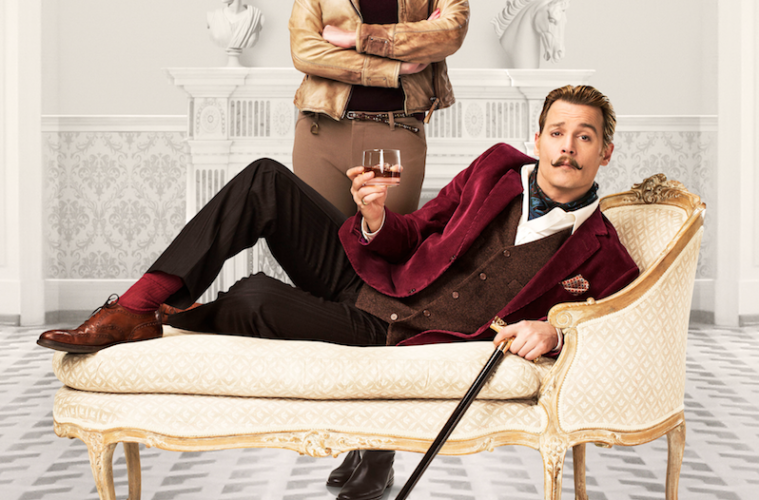 As talented a director as David Koepp is, he’s no Blake Edwards. The screenwriter of many excellent features (Jurassic Park, Carlito’s Way, The Paper, Panic Room) — as well as a director of several good thrillers (Stir of Echoes, Secret Window, Premium Rush) — and star Johnny Depp veer into Jacques Clouseau’s territory with some painful results. There’s nothing worse than a film that’s laughing at itself while the auditorium is silent, and while Mortdecai inspires a few chuckles, it never fully delivers.

Mortdecai is all about attitude and stash, as adapted by Eric Aronson from the Mortdecai trilogy of books, and perhaps the material is past its prime. Rather than updating things, this Charlie Mortdecai is locked firmly in his era, à la the theatrically released Brady Bunch movies made in the ’90s. I suspect the exposition and narration, provided throughout by our eponymous hero, is more amusing on page than screen. I don’t take issue with the goofy tone, which, under the correct circumstances, could be delightful; it’s just that no one does very much with it. Consider the fish-out-of-water third act as Mortdecai heads to Los Angeles and meets with Krampf (Jeff Goldblum) and his nymphomaniac daughter Georgina (Oliva Munn) — she actually doesn’t seem like much of a nymphomaniac apart from inviting Mortdecai to touch her breasts in a very odd scene with little pay-off. This goes for much of the globetrotting adventures of Mortdecai, an aristocrat with his own manservant, Jock (Paul Bettany), and a rivalry with a local inspector (Ewan McGregor). His marriage to Johanna (Gwyneth Paltrow) is on the rocks, for they are at odds over, amongst other things, his newly sprouted facial hair, which inspires a few chuckles as he grows to become protective of his ‘stache. The film’s funniest moment takes place during his L.A. visit: while in an elevator full of lumbersexuals, our man is simply awestruck with the facial hair before him.

The plot, as it were, should be a narrator clothesline of sorts on which to hang character-driven comedy. It instead grows complex, replacing Mortdecai — who, under the circumstances, is a remarkably thin character — with a globetrotting adventure that sees him traverse all over England, with stops in Moscow and Los Angeles in pursuit of a missing Goya that has become a matter of national security. The test for a film such as this is simple: do we enjoy our time with these characters, Mortdecai, Johanna and Jock? The answer, sadly, is not so much.

Chalk it up to a misfire with decent ambition, but Aronson’s script just isn’t as funny as it thinks it is and Depp is no Michael Caine, and the irony of Charlie Mortdecai is that he isn’t really enough of a dirty rotten scoundrel to justify his reputation. The villains, too, lack the charm of the richest ones in cartoons, and this is essentially what this picture aspires to be. The filmmakers should have watched a few more episodes of Archer before proceeding.

Mortdecai is now in wide release.