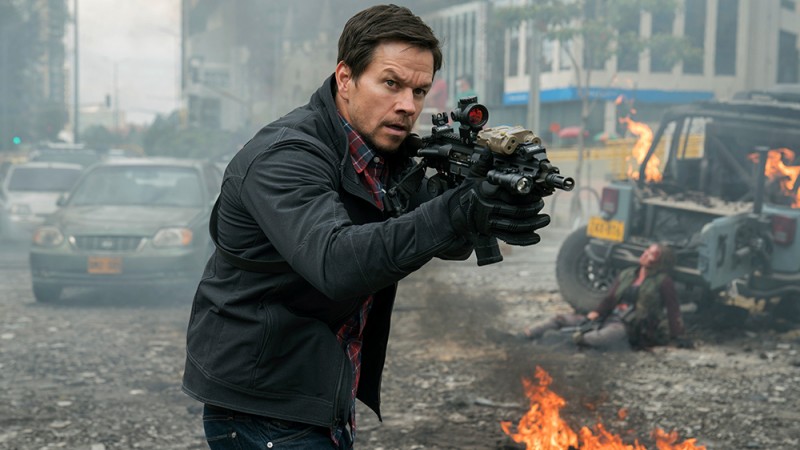 Mile 22 is perhaps the least sentimental action film of the decade. Any whiff of internal conflict is undercut by an “Are you done with this yet? We have real shit to do” reaction. This sounds like an exhausting, masculist machine existing just to be the antithesis of the “weepy, uncool” action film, but The Two Bergs (director Peter Berg and star Mark Walhberg) commit to the idea so wholeheartedly that it is able to bypass initial concerns, and instead become something else. The result is at times quite thrilling, and clocking in at 90 minutes, refreshingly concise.

The fourth collaboration of The Bergs follows an elite CIA task force, whose modus operandi includes leaving their fallen behind if necessary, so that there’s quite literally no time for character turmoil or second-guessing. Unlike many other films of its ilk, there are few (if any) “quiet” moments between the team; no three-minute breaks for conversation in the midst of a situation. They have to keep moving. Here, through some perverse commitment, Mile 22 manages to subvert ultra-machismo, and reaches a study (at least a study through depiction) of the sort of personality type this job would attract, though I am sure surface level embracement of its character’s behavior can and will be latched onto by some.

The personality type in focus here is James Silva (actor ‘Berg, who leads his small group (Lauren Cohen, Ronda Rousey, Carlo Alban) tasked with moving an asset with critical information (The Raid sensation and silat master Iko Uwais) the titular length to an extraction point. That’s the meat and potatoes of it, and director Berg seems to understand he’s at his best when staging action. An opening set piece establishes his lexicon neatly, combining monitors and information with boots and firearms. Here, tension through satellite imagery affects people on the ground, just as blood pressure signs are used for narrative propulsion later: it’s the unity and disunity of data and bodies. There’s a constant recurrence of images-in-images, with dust blocking cameras and buildings seen from above as toy models, with figurines moving to and fro. The steady return to control rooms establishes an emotional distance to the situations which unfold on the ground, no doubt mirroring the attitude toward the job. Here’s a film where domesticity is dealt with through a divorce app.

There’s the requisite set-up before a barrage of images and moments. During this interval, actor ‘Berg is extremely grating, yet no one tries to say otherwise. You get the sense people are rolling their eyes behind his back — occasionally to his face — and just putting up with this guy. Because, to quote another recent action film, that’s the job, and Silva is good at his job. His personality isn’t condoned, it’s just suitable. In fact, people weigh in on his psychological profile like armchair psychologists placing bets, and none are flattering. He’s a crude bastard in a task-based world, and there’s no real revelatory or breakthrough moment with him, except in his decision-making at a crucial moment. Even this moment is justified and reinforced in the tonality of the film’s context with the best line of the whole bloody affair.

That blood is where both Bergs shine. Iko tears faces, and Berg stages a particular action scene around the diminishing strength of a pair of legs. It’s all tech porn and cordite-infused mania, occasionally jumbled by over-editing, but never dull. In fact, all of Mile 22 is coated in garbled data; it is a mesh of information and images colluding to thrill you so its underlying cynicism and defeat can sneak in the back door to shine through in its coda. This is Berg let loose, and for all the alleged jingoism, the whole thing is laced with a sense of mistrust and anxiety, where the idea of a comeback or a redemptive note is on the same cycle of violence on the next new battlefield, repackaged and churned out. Personal showdowns are forgone in the wave of big-picture goals, figurines swept up by a disinterested creator.

A bobblehead of Donald Trump is placed next to Barack Obama on a monitor, height and framing equal. In this room are bobbleheads of other Presidents too, not divided by party lines or grouped by vital signs. Also present here are controls and equipment and people all capable of initiating a drone strike, or ‘calling in the hand of God’ as it is styled here. This is exemplary mise-en-scène for Mile 22, where pressing ideals are regarded as wobbling figurines in an ever-constant mess of bullshit, as much as it may be indicative of today’s America. Some days you win, some you lose.

Mile 22 is now in wide release.