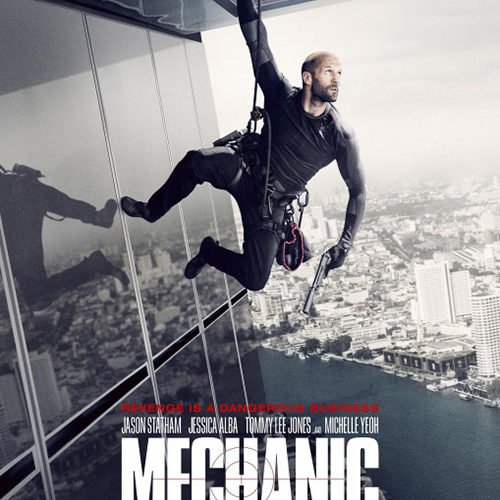 The mere existence of Mechanic: Resurrection, a sequel that no one asked for, serves as a reminder to a time before the internet could show you anything and everything. A time where a certain kind of cheap action flick played late at night on an early iteration of HBO (back when Cinemax was called“Skin-emax”). Low-budget productions that contained set-pieces wrapped in a lame plot. The odd thing about this specific genre is that these low expectations can sometimes lead to magic; in essence, the concept is pre-sold and a rouge director can run wild provided they deliver the goods. This freedom sadly does not exist in Dennis Gansel’s paint-by-the-numbers product, which ought to have been released directly to VOD.

Jason Statham returns as Arthur Bishop, a hired gun whose escaped from the dead only to resurface in Rio. This introduction exists only to establish our hero is a wanted man, jumping from the roof of a gondola onto a hand-guilder in an artificial-looking scene designed to rip-off a much better Bond movie. Cut to Thailand where Bishop lays low, stopping in to visit an old friend and collect his suitcase full of passports, a water-proof phone, and an old Dell computer where he logs on to a freelancer.com-style marketplace for assassins.

At random he meets Gina (Jessica Alba) an American in paradise with an abusive asshole who soon finds himself on the business end of the “mechanic.” Gina and Bishop fall in love in a sequence that neither Alba or Statham can take seriously, which leads to a sex scene so soft-core it’s more or less a PG cuddle party rather than the kind of aforementioned sequence that partly gave these kinds of B-movies a reason to exist.

The film trades this soft-core sensuality for hardcore violence as Gina finds herself kidnapped by a rival. The impenetrable Bishop suddenly finds himself vulnerable. As all of his walls come down, he agrees to “one last job,” picking off three bad guys in exchange for her freedom. This leads to a few decent action moments (many of which are in the trailer), including a spectacular-yet-improbable bit in Sydney that requires Bishop to drain a high-rise pool the hard way. Why this pool wasn’t lined with multiple layers of earthquake-proof glass is a mystery to me, but logic isn’t this picture’s strong suit, nor is character development.

Tommy Lee Jones eventually appears with a goatee and pimped-out swag to collect his paycheck. This is about the only bit of fun the film has with the absurdity of the situations it finds itself in. Unlike the first Statham-led Mechanic, this film refuses to fully embrace its silliness and low budget. With a bar this low they might as well hire Tommy Wiseau for the next one; while screenwriters Philip Shelby and Tony Mosher lack Wiseau’s gumption, their screenplay has as much nuance as The Room.