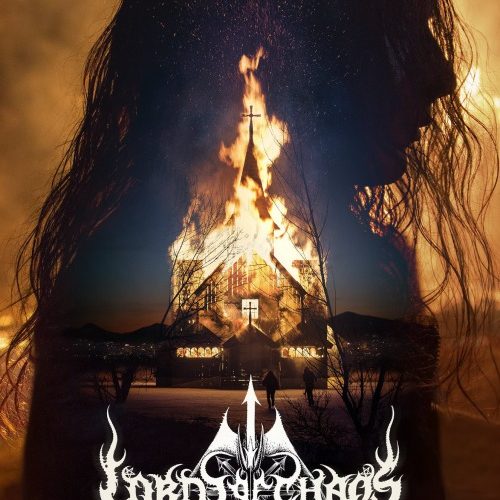 Talk to “true” Norwegian black metal fans and they’ll tell you Michael Moynihan and Didrik Søderlind’s book about the scene’s origins and criminality is a bunch of baloney (but in much harsher words). It’s interesting because the facts behind a series of church burnings, the suicide of a lead singer, and two subsequently high profile murders are indisputable. Those who were tried and found guilty before serving their time in prison don’t dispute the acts themselves, but merely the way in which they are presented. And who are we to defy them? These are convicted monsters that continue making music today for a rabid fan-base reveling in their no-holds-barred demonic creed. They’ve got their reputations to uphold and this story works to question their mettle let alone sanity.

So they of course hate the idea of director Jonas Åkerlund’s adaptation of said book alongside co-writer Dennis Magnusson. Musician Varg Vikernes has been vocal about denouncing his portrayal in Lords of Chaos along with those of his former Mayhem band-mates. Is this vitriol worthy of our attention? Sure. It definitely says something about the story behind the legend if those depicted disapprove. The thing you cannot do, however, is blindly believe them since we’re talking about murderers, arsonists, and accomplices whose anarchist psychopathy provides ample reason for being vocal in opposition. And if the film is somehow truer to real life than jokingly admitted by being “inspired by the truth, lies, and what actually happened,” their rejection shouldn’t be surprising. They demand that their tough image survives. It’s this sense of identity that’s on the line when you let Øystein “Euronymous” Aarseth (Rory Culkin) narrate his life with the promise that things won’t end well. Here’s a self-involved narcissist talking himself up to audiences that have never heard of his band Mayhem let alone him. He declares himself the father of true Norwegian black metal nonetheless, rising on the backs of his nation’s pagan history rather than the light of a Christian God. Weirdly enough, he’s not wrong as metal circles hold his work as highly influential. We see the charlatan beneath the corpse make-up, though. We see the poseur latching onto ideas despite rarely practicing what he preaches. Euronymous wants the spotlight and will say anything for it while the others listen and comply.

What follows is therefore more akin to a cult than anything else. Euronymous is its leader spouting scripture with enough unearned confidence and authority to have everyone fall in line. He asks for complete obedience to his Satanic philosophies and watches as his lead singer Per “Dead” Yngve Ohlin (Jack Kilmer) mutilates himself onstage to amplify that mystique. He demeans those who aren’t “real” enough to enjoy some obscure self-published artist and reject the pop sensibilities of bands like Scorpions. Whereas he sets all this darkness and death up as a publicity stunt to increase market exposure, guys like Bård Guldvik “Faust” Eithun (Valter Skarsgård) and the aforementioned Varg Vikernes (Emory Cohen) absorb it into their souls. Who then is more metal: the orator or his savage disciples? Lords of Chaos the film ultimately could care less about the music when the psychology of this scene’s progenitors is what intrigues. So those expecting to learn about the genre will be sorely disappointed. This is about aesthetic, notoriety, and paranoia. What happens when the person saying rather than doing takes credit for those acting on his words? What happens when those who’ve refocused their entire identities around what that ringleader says realize they’ve wrested control from his hands? It’s all for show and “street” credibility at first, but these young men embrace the darkness so fully that it consumes them. Consequences become meaningless once mythic stature is on the line. When your dead friend’s body becomes a potential publicity stunt rather than tragedy, there’s no turning back.

This is why Culkin’s performance is key to the whole’s success. We need to both believe his dead-eyed ambivalence and his palpable fear. His Euronymous has to be able to turn from disinterested badass to on-the-verge-of-tears human with nothing more than a call of his bluff. Åkerlund does well to initially keep the latter in the background — public pauses as his voice catches up with an ever-calculating brain — because any true sense of the private unraveling beneath that façade is better served with hindsight. An early suicide becomes a turning point wherein Euronymous steels himself to the mission rather than having an excuse to quit. And Varg’s entrance as a wildcard with a surprisingly much stronger stomach pushes him to discover success and oblivion are beginning to overlap. I only wish Åkerlund was able to flesh out Varg’s character as much as Euronymous. Even though the others (Faust and Dead particularly) do some pretty heinous things (this film is not for the squeamish as blood flows freely from close-up lacerations of metal into flesh), we can accept their peripheral roles as mere catalysts to their Black Circle president’s constant marketing spin. Varg is different, though. On one hand he’s Euronymous’ creation and on the other he’s his superior. Cohen plays the role with a quietly shy intensity before praise from his peers for an ever-escalating pattern of violence emboldens him to escape the shell he sought to leave behind. Rather than appreciate that complex mental devolution, though, the film wields him like an imbecilic punch line.

It makes sense since Euronymous is our narrator and the man who set this demonic ball a-rolling, but that disrespect of Varg’s power and mirrored contrast does diminish his effect. Giving the former a real girlfriend (Sky Ferreira’s photographer Ann-Marit) while the latter disposes of women like trash only augments the reading that Euronymous’ legacy is being protected while Varg’s is slandered. We’re talking about a character whose trajectory is a by-product of his entitlement with Euronymous’ impact visibly present behind every bad act done unto him by another. Varg is conversely the “victim.” He’s the one we should sympathize with because he’s been used as a pawn since day one. He might be dumb as rocks, but you almost have to respect his warped sense of pride.