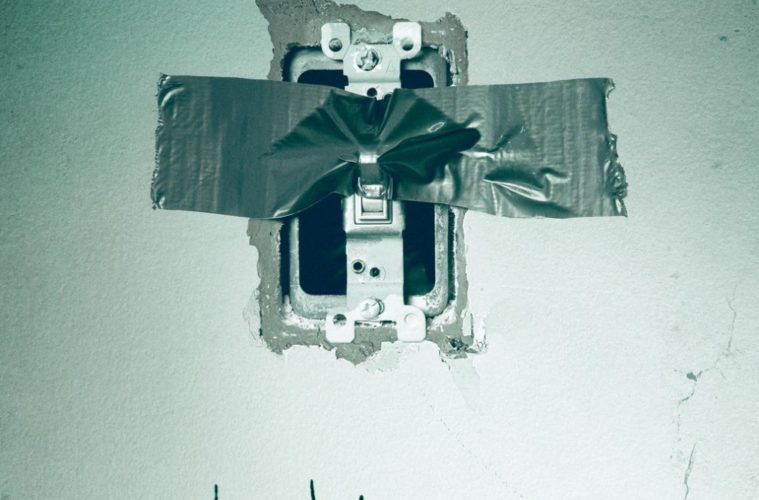 A solid hook is one of the biggest factors in what makes a successful film pitch. This doesn’t guarantee a film will end up being good, but it’s a place that can start you off on the right path. Perhaps this is why it is becoming increasingly common to find shorts turned into feature-length films. District 9 and Whiplash each had humble beginnings as short films, helping to draw attention to financing for their feature-length treatment. Lights Out is no different and it succeeds largely because director, David F. Sandberg allows the world to expand beyond his excellent short and become something much more disturbing.

The general premise is simple: when you turn out the light, something appears in the shadows. Even now, typing this out, I’m treated to goosebumps. When you flick the light back on, the apparition is gone. It may not even notice you and you think it’s just the dark playing tricks. So you turn out the light again. Off and on you go until, suddenly, it moves closer. It’s noticed you and you’re not sure what to do.

That’s a powerful hook. It plays on the everyday experience as you can look around wherever you are reading this and imagine times during the day that some corners of a room are dark — dark enough to hide shadows and potential demonic beings. By focusing on situations you can easily imagine yourself in, there’s no question of suspending one’s belief.

To increase stakes, Sandberg has the narrow focus of a single family and their dynamic. Martin (Gabriel Bateman), a young 10-year-old boy, lives with his mother Sophie (Maria Bello) and hears her talking to herself late at night. He’s concerned and the next week we find out he has hardly slept at all as he is dozing off class, prompting the school to get involved. He can’t complain to his mother because she’s a little unsettled so for help he reaches out to his step-sister, Rebecca (Teresa Palmer).

As soon as she enters the equation, unexpected turns occur, and there’s an undercurrent of mental illness that is easy to grasp. A common trope in ghost stories is that you run into non-believers at every turn. “There’s a ghost haunting me.” “It’s probably the light playing tricks.” None of that happens here because Rebecca, with foreboding scratches up and down her arm, is intimately familiar with how terrifying living with their mother can be when she is off her medicine.

This simple tweak of the horror cliché ratchets up the intensity significantly because the characters in the story are on the same page as the audience. There’s still a learning curve to be had that I won’t rob you of, but it’s an addition by writer Eric Heisserer that should be given praise. A careful, slowly-revealed mythology around the apparition builds and it largely depends on Bello selling it. She has a history with the being that seems to be both friendly and antagonistic. Sophie can quickly shift between manic to calm and the bouncing between them is handled deftly. She is unreliable and because we’re focused on the small family dynamic, the simple stakes increase the strengths of the horror. A loved one is harming a loved one unintentionally.

Rebecca at first takes Martin to live with her and her boyfriend Bret (Alexander DiPersia) but when child protective services show  up the next morning they have a long conversation about the fact that there are legal steps that have to be taken. Court battles. Winning custody. And Rebecca, pictured as a rock ‘n’ roll chick that lives above a tattoo parlor with hardly any food in the refrigerator and hash pipe in the corner, has to prove that her home can be a stable environment for a child. There’s no easy answers and when the apparition also shows up at her home, it makes it clear that simply going on the run isn’t going to solve things.

By the time the finale rolls around they’ve learned a few tricks, but some of the apparition’s scariness is robbed as Sandberg fails to truly amp things up, which can be difficult in a lean 81-minute runtime. The selling point largely rests on how long one can be spooked by the apparition and one’s investment in the characters, with strong acting from all involved. With some immensely chilling sequences and a lot of the eye-rolling moments of the horror genre cleverly sidestepped, Lights Out features a simple premise that is told confidently. Bolstered by the mythology it builds and scares that rarely feel cheap, it shows even wide-release horror doesn’t have to be a groan-inducing slog — and you’ll definitely think twice about turning the lights out.