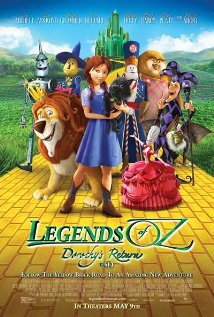 Early on in Legends of Oz: Dorothy’s Return, our tornado-riding, dimension-hopping heroine realizes that the world she’s come back to is a very different, diminished place from the one she left all those years ago. That moment is the only one in this clunky animated feature that audiences will be tempted to relate to. Dorothy’s Oz has been ransacked by the villainous Jester, but the one fans see up on screen has a cabal of bland, product-minded adults to thank for its desolation. If encouraging a youngster’s imagination is a form of nurture, taking a tyke to see Legends of Oz may be a form of child neglect.

Based not off of Baum’s extensive book series or even the 75-year-old classic film, Legends of Oz draws its meager source material from a 1989 novel by Roger Stanton Baum, Frank’s great-grandson. Dorothy (Lea Michele) does indeed return to Oz, as the title suggests, and when she gets there she’s reunited with her famous traveling companions, the Scarecrow (Dan Aykroyd), the Tin-Man (Kelsey Grammer), and the (ex) Cowardly Lion (Jim Belushi). At first this seems potentially compelling– after all, none of the cinematic Oz sequels brought that trio back for a full-length adventure with Dorothy—but it’s quickly inoculated by having them captured by Martin Short’s irritatingly manic Jester, the alleged brother of that superbly menacing Wicked Witch of the West. Another returning comrade of Dorothy’s, Glinda the good witch (Bernadette Peters), has also been incapacitated by the Jester, which necessitates a need for a brand new gang and a brand new adventure — actually, “brand new” is a bit of a stretch. There’s Oliver Platt’s rotund owl Wiser, who disappoints every time he fails to sound like Dom DeLuise, Hugh Dancy’s flavor-free Marshal Mallow, and Megan Hilty’s spoiled Bratz version of Dainty China Princess. This sad-sack lot makes one nostalgic for the creepy but compelling comrades from the mildly sinister but underrated Return from Oz, one of whom was nothing more than ratty sofa with a talking moose’s head. Along the way they also encounter Patrick Stewart as a tree, who surprises by being markedly less wooden than anyone else on hand.

Yes, there are frolicking adventures in the Candy County and skirmishes with those flying monkeys, who have traded up their creepiness for neon Mohawks, but it’s almost impossible to care about anything that happens due to a complete lack of passion in every facet of the production. The animation here is flat, jerky and inexpressive, matched by an art direction that’s astoundingly generic; that first shot of the glorious matte-painting Emerald City in 1939’s Oz shames every digitally rendered scene in this one. The script is mediocrity personified, with forced comedy generating the film’s only two genuine reactions, frustration and embarrassment. The cast is a good one, but they feel like an afterthought, brought in to cover a shoddy, lackluster product and the way the picture wastes the likes of Peters, Stewart and Aykroyd is kind of criminal. This Oz has also been conceived as a musical, with songs written by the likes of Bryan Adams and Tift Merritt, although don’t expect Broadway wannabes like “Even Then” to become the next “Let It Go,” Michele and Hilty should invigorate the musical numbers, but their voices can do little with the clunky animation and sheepish direction by Will Finn and Dan St. Pierre. The added element of the songs is particularly damaging forOz, because it underscores the film’s absence of personality and vitality. It’s one thing to attempt the usual adventure story with a bland, cut-and-paste mentality; it’s another entirely to approach the effervescence of a musical with a tone as dramatically flat as the Kansas plain Dorothy hails from.

There was a welcome eccentricity to Baum’s books and to the Judy Garland film—and indeed, to Walter Murch’s Return to Oz—that is missing here, a sense of the magical and that anything, really, could happen if it wanted to. At the same time, this Oz also loses the classic film’s sense of intended meaning; the beauty of Dorothy and his compatriots discovering they carried their powers within them is replaced by haywire character foibles that flare up as if these Oz buddies were a malfunctioning android on Star Trek.

I grew up with the Victor Fleming/King Vidor movie, and it remains one of the most unflinching and transporting fantasy films I’ve ever seen. Not because of its realism or authenticity but because of its all-in sense of wonder and excitement, and its innate quirkiness, mostly undervalued since it became a staple of pop culture. Against such a landmark, Legends simply crumples up and withers, like the Wicked Witch of the East after being crushed by the Gale residence. There’s nothing here, for better or worse, that generates an ounce of real emotional energy. The next traveler down that yellow brick road to see the Wizard should be this Oz movie itself, who is desperately in need of a heart, a brain and a large helping of nerve.

The Legends of Oz: Dorothy’s Return is currently playing in wide release.