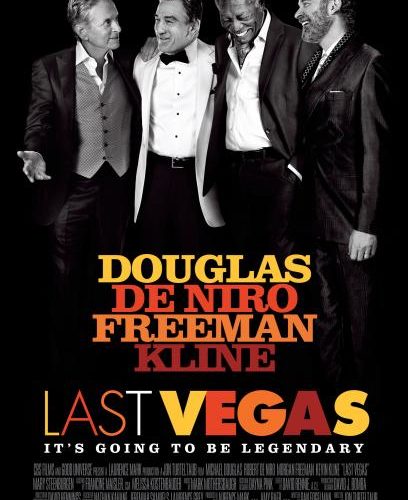 The great Gene Siskel famously had a test a film with this stellar of a cast would have to pass: is it more interesting than watching a documentary of these actors eating lunch? I’m not so sure, as Last Vegas delivers what you’d expect. It’s a pleasant, likable enough situation comedy that veers into some sentimental territory that doesn’t quite connect, while setting some slightly cringe-inducing scenarios that partly work. The star power saves what is a clunky and somewhat problematic script that could have used another pass or two (by Dan Fogelman, responsible for the painful train wreck that was The Guilt Trip).

Opening with an efficient flashback to late 50’s Flatbush, we’re introduced to four buddies: Billy, Paddy, Archie, and Sam. They take of their own, especially as a little love-triangle forms. Cut to present day and the “Flatbush Four” are all living separate lives — Billy (Michael Douglas) is living the kind of life you’d expect from a Michael Douglas character; he’s a rich Malibu-based California playboy about to get hitched to Lisa (Bre Blair), 30 years his senior. Sam (Kevin Kline) is unhappy living in Florida, attending 4:30PM dinner parties and aqua-aerobics for seniors; he’s married to Miriam (Joanna Gleason). Paddy (Robert De Niro) has just lost his wife and has spent a year on his couch, while Archie (Morgan Freeman) is confined to his house following a minor stroke. When Billy calls Sam and Archie to unleash the good news they propose a Vegas bachelor party and the gang is back together. While the adventures aren’t as bizarre as The Hangover, Last Vegas is amusing, and is saved by its star power. Regrettably, Fogelman’s script delivers exactly what you’d expect, pretty much when you’d expect it, with some a few fun twists. When Miriam provides her husband Sam with a note (“what happens in Vegas stays in Vegas”) with Viagra and an attached condom he initially takes it as an invitation to go wild, hitting on a cross dresser at a bar. There’s many ways this scene and perhaps Sam’s adventure could go, but this film plays it safe with a minor call back later on. Restrained, the film flirts with zany without ever taking a chance and going for it; in essence it’s not nearly as much fun as it might have been. Take, for example, a very predictable encounter that occurs very early on as the four focus their attention on Diana (Mary Steenburgen), a lounge singer at a third-rate casino. You know exactly where this is going from minute one.

Other characters and gags have little-to-no payoff, including the appearances of a few celebrities (none of the cameos are true Vegas legends, which might have been fun to include). Last Vegas simply lacks the excitement you’d hope for; sure, it’s not, and has no business being, Bad Grandpa, but apart from the drinking and ogling of women that could be their grandkids, Fogelman’s script is too comfortable and tame. Perhaps it’s perfect for those catching a matinee before the early bird special.