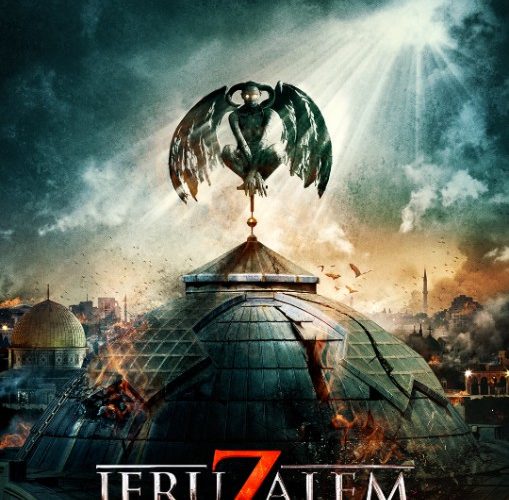 Is it coincidence that Google filed a new application to revive Google Glass on December 28th (despite halting production on the prototype in January) just weeks before Israeli-set horror film JeruZalem supplies a 90-minute adventure into Hell through those exact lenses (albeit a pair of fictitious knock-offs)? Yes. It’s most definitely a coincidence. But whether that technology was going to stay dead or be reborn has little bearing on Doron and Yoav Paz‘s latest work because utilizing it provides an effective gimmick regardless. Doing so is by no means wholly original with the effect proving [Rec] meets Cloverfield meets Unfriended, but sometimes a slight twist is enough to render a maneuver fresh. I actually would’ve liked more electronic “glass” intrusions than were used to set it further apart.

The Paz Brothers open their tale with the apparatus’ acquisition as a gift from Mr. Pullman (Howard Rypp) to his daughter Sarah (Danielle Jadelyn) hours before she’s to leave for a trip abroad in Israel. One could say the present is more for him than her as it ensures access to Skype and social media so updates are only a button click away. (I love that Dad’s facial recognition loads MySpace while everyone else goes to Facebook despite the joke being about eight years too old.) Why Sarah wears them often enough to not miss any crucial story beats is odd at first, but supposedly they’re set to her prescription and therefore are pragmatic as well as ostentatiously intrusive. Best friend Rachel (Yael Grobglas) doesn’t seem to mind.

In usual co-ed horror vacation fashion the girls meet a fellow traveler in Kevin (Yon Tumarkin) on the plane and get chummy with Omar (Tom Graziani), the son of their hostel owner, to pair off with, get some local flavor, and open the door to the religious occult/zombie insanity coming. Act One is heavy in exposition as each arrives—the opening credits delivering a literal voiceover narration accompanied by “Vatican-archived” footage of the dead rising to prove why Jerusalem is a “gate to Hell”—and it can get plodding. But similar to the movie Hostel as far as getting to know the characters and what they seek in life before staring mortality in the face, there’s enough to pique curiosity and wonder who is aware of what.

That said: Act Two blows the first out of the water. It’s too bad the Paz Brothers couldn’t have dove into the dangerous first-person race for survival straightaway a la Cloverfield and let us get familiar with them all at full-throttle because that’s when Jeruzalem really hits its stride visually and psychologically. The nighttime setting helps the monsters lurking in the shadows look believable as well as fearsome when least expected while allusions to Jerusalem syndrome and the convergence of multiple Gods in the Old City aren’t just for native color—a Biblical apocalypse is upon them and the Devil each disparate religion shares wants out of his dungeon. And no one is above his wrath no matter his/her billing or pay scale. Lucifer is equal opportunity.

Surprisingly everything we see has purpose so don’t simply dismiss loony “King” David (Itsko Yampulski) or Omar’s out-of-touch and sometimes lecherous father Fauzi (Fares Hananya). They each prove crucial to the climax and while it can feel contrived looking back, it works in the moment. The only thing that doesn’t is lazily adding a subplot about one character’s dead-too-soon relative. Any time that happens in a movie hinging on the idea of souls rising from the grave is boring at best. The pay-off here is just as eye-roll-inducing as ever, but thankfully not all is lost as the score crescendos into the end credits. Even when things play out exactly as you expect the Paz Brothers find a way to keep it intriguingly dark.

As for the performances: each gets its job done. Everyone’s definitely better once Yom Kippur hits and the first bomb falls, but they’re endearing enough on their own during the quiet moments to never truly annoy. The vantage point from Sarah’s glasses helps because everyone acts goofier when something is present as a filter outside authenticity. She isn’t recording, but there’s always room for a snapshot or Wikipedia look-up or electronic stalking session of someone new for people to ham it up. The humor’s therefore more of the acting-out variety or people caught on the spot and unsure of their English to answer as eloquently as desired. There’s a charm to this that a brief “fatal error” to the tech throwing up cat videos cannot equal.

The religious commentary about Jerusalem simultaneously being the most holy place on Earth and the deadliest might be too on-the-nose when it introduces two Israeli soldiers (Ori Zaltzman‘s Tomer and Yoav Koresh‘s Yehuda) to combat Omar’s Muslim, but whatever. It’s not out of the question that something similar would happen with tensions high and blood bad. The film relies on this aspect to turn the city into ground zero after all; an example of such strife becomes a necessity. No matter what either believes or how fearless they pretend to be, both will run once that first winged creature barrels towards them. I only wish the glasses interjected more when the running begins. It eventually—wrongly—becomes synonymous with a camcorder save one nice moment of malfunctioning music.

No matter how distracting it might be, the Google Glass stuff is crucial to making Jeruzalem more than a found footage rip-off. So when WhatsApp opens with texts from home or Wiki entries describe the church Sarah and Kevin visit, I found myself engrossed. I became Sarah wandering around and seeing things for the first time—jumping when creatures exited the shadows and squinting when the lenses cracked and created a halo of light to blur my vision. It’s by no means perfect thanks to the deceased relative being introduced so early and a ham-fisted VR-videogame foreshadow, but things get tense once the demons rise and the rest simply falls away. The cool creature design and authentic first-person cinematography/lighting later on will have you forgiving any early shortcomings.